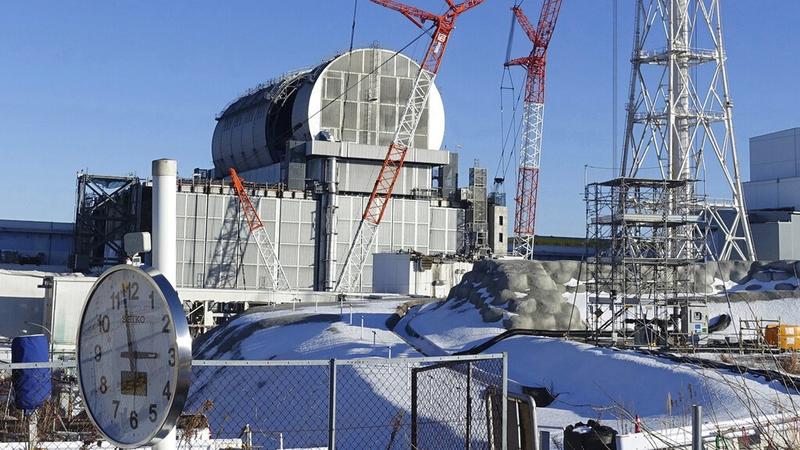 In this Jan 25, 2018, file photo, an installation of a dome-shaped rooftop cover housing key equipment is near completion at the Unit 3 reactor of the Fukushima Dai-ichi nuclear power plant ahead of a fuel removal from its storage pool in Okuma, Fukushima prefecture, northeast Japan. (MARI YAMAGUCHI / AP)

TOKYO — Japan's nuclear regulator said on Wednesday it would launch a new investigation into the Fukushima disaster, to look into how radiation leaked from damaged reactor containment vessels and other factors.

Three reactors at an atomic power plant run by Tokyo Electric Power melted down after an earthquake and tsunami eight years ago, spewing radiation that forced 160,000 people to flee, many never to return.

Authorities have said they are planning a series of investigations as radiation levels gradually fall enough in reactor buildings to allow closer examination.

The Nuclear Regulation Authority (NRA) released a paper showing it would look into the leaks in the reactor vessels and at cooling systems set up to keep the melted fuel in the reactors from overheating.

Tokyo Electric Power (Tepco) said it was ready to help. "If requested in the future, we would like to proactively cooperate in the investigation, such as providing necessary data," a spokesman said.

The March 2011 meltdown at the Fukushima Dai-ichi nuclear station north of Tokyo was the world's worst nuclear disaster since Chernobyl in 1986. It led to the eventual shutdown of all Japan's reactors, which before the disaster had supplied about 30 percent of the country's electricity.

A commission appointed by Japan's parliament concluded in 2012 that Fukushima "was a profoundly manmade disaster – that could and should have been foreseen and prevented, (while) its effects could have been mitigated by a more effective human response."

ALSO READ: Japan 'may have to dump radioactive water into Pacific'

In 2016, the government estimated the total cost of plant dismantling, decontamination of affected areas, and compensation would be 21.5 trillion yen (US$199 billion), or about a fifth of Japan's annual budget.

Environment minister Yoshiaki Harada said on Tuesday Tepco would have to dump radioactive water from Fukushima into the Pacific Ocean as it runs out of room to store it.