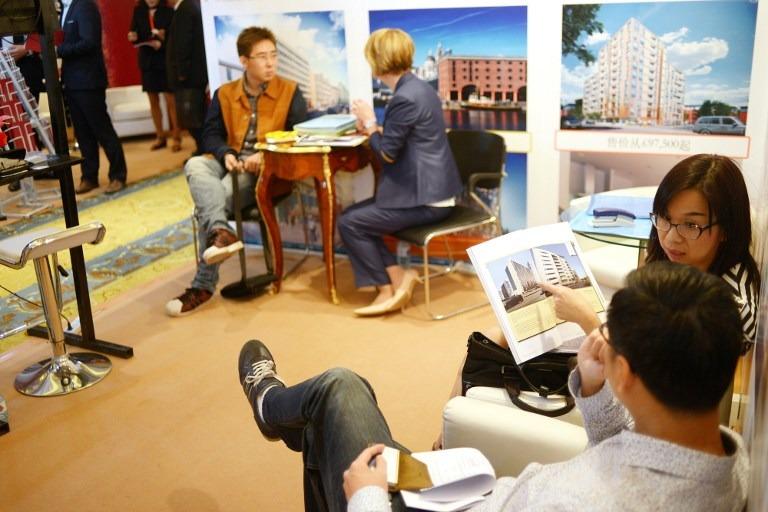 Chinese investors talk with agents for a British property investment company at an international property exhibition in Beijing on May 17, 2014. (WANG ZHAO / AFP)

Overseas investments of Chinese real estate companies, which focused on the US market until 2016, will target emerging Asian markets more and more in the next two years, industry reports suggest.

Mainland property investment in Asia grew 34 percent to reach around US$12.5 billion last year while that in the United States dropped 64 percent to US$5.9 billion, data from property research firm Real Capital Analytics showed.

Driven by both growing demand for infrastructure in Asia and the China-led Belt and Road Initiative, Chinese realty players will focus on Southeast Asia and South Asia in particular, according to a report from Colliers International Group, a global real estate consultancy.

In 2017, Chinese investment in realty in Southeast Asia and South Asia surged almost four times to US$2.5 billion, half of it in office and industrial property segments

Chinese investment in overseas property assets reached a record high of about US$39.5 billion in 2017, up 8 percent year-on-year, and seven times higher than that of 2012, Real Capital Analytics said.

In 2017, Chinese investment in realty in Southeast Asia and South Asia surged almost four times to US$2.5 billion, half of it in office and industrial property segments.

"Like China back in the 1990s, these markets (such as India, Indonesia, the Philippines and Malaysia) show more demand for infrastructural facilities nowadays, including industrial parks, office buildings and residential apartments," Zhou said.

He said JLL analyzed the property lease business of around 90 Chinese real estate companies in 70 cities world-wide, to find that those operating in Southeast Asia and South Asia generally performed well.

"The smooth expansion of rental business suggested an active customer demand," he said.

China also experienced a comparable trend of modernization. So, property companies' experience in the China market will likely give them a head start in those markets compared to competitors from developed countries, he said.

"Local clients' basic needs for housing and manufacturing should be met first, and then follow shopping malls and other commercial buildings," Zhou said. "Domestic companies may have richer experience in providing products that match the immature markets."

Shortage of stock in Asian markets suggests development projects with local partners will be the key to market access, and opportunities will center on industrial and residential property, he said.

"As companies go global, the most important thing is to obey local rules and serve local people," he said.