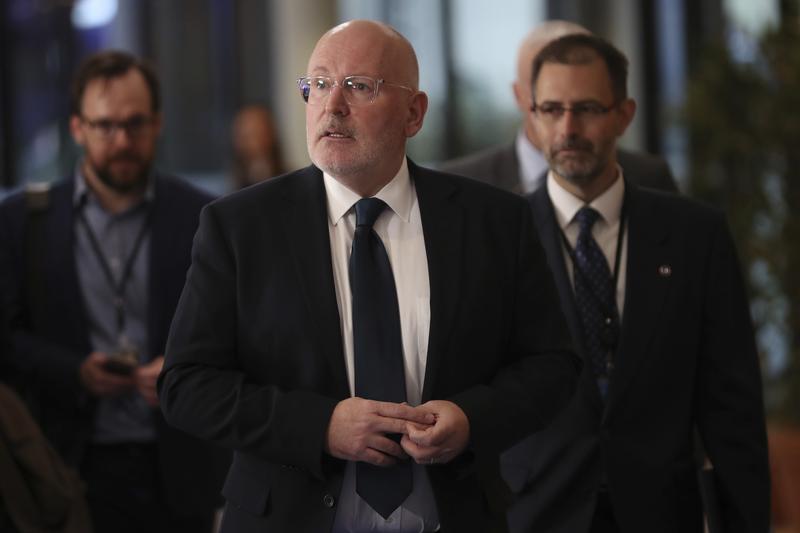 Netherland's Frans Timmermans, center, of European Socialists party arrives for a debate of the candidates to the presidency of the Commission at the European Parliament in Brussels, May 15, 2019. (FRANCISCO SECO / AP)

THE HAGUE, Netherlands — Pro-European Dutch parties were predicted Thursday to win most of the country's seats in the European Parliament, with right-wing populist opponents of the European Union managing to take only four of the nation's 26 seats.

In a surprise forecast, the Dutch Labor Party of European Commission Vice President Frans Timmermans became the country's biggest party in the 751-seat European Parliament, according to an Ipsos exit poll.

The poll was published by Dutch national broadcaster NOS after polling stations closed Thursday evening in Netherlands. Earlier in the day, Dutch and British voters kicked off the first of four days of voting for the European Parliament in all of the EU's 28 nations.

Official results will only be announced after the last polling station in the EU closes late Sunday.

The Dutch Labor party was forecast to win five seats, while the pro-European center right VVD of Dutch Prime Minister Mark Rutte gained one seat to win a total of four seats. 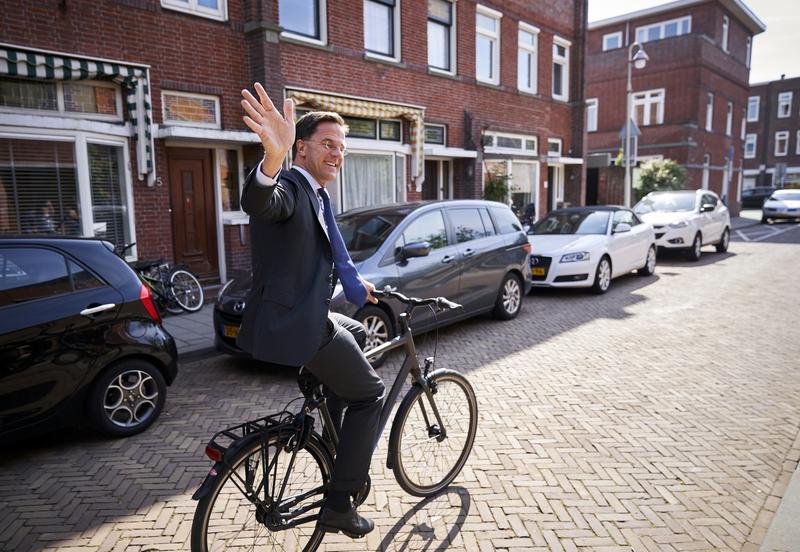 Netherlands Prime Minister Mark Rutte leaves on his bike after voting in the European elections in The Hague, Netherlands, May 23, 2019. (PHIL NIJHUIS / AP)

"There is a clear majority of people in the Netherlands, if you count them altogether, who want the European Union to continue playing a role in tackling problems that need to be solved," Timmermans told NOS, speaking from Spain.

Timmermans is a broadly respected former Dutch foreign minister who is trying to become the next president of the European Commission.

The Dutch right-wing populist group Forum for Democracy was forecast by the Ipsos exit poll to win three seats in its first European elections, but those gains didn't primarily come at the expense of Europe's mainstream parties. Instead, it appeared they came from other populists. The anti-Islam Party for Freedom led by firebrand lawmaker Geert Wilders lost three of its four EU seats, according to the poll.

The splintered result echoes Dutch domestic politics: There are 13 parties in the 150-seat national parliament.

The United Kingdom was the only other EU country to vote Thursday, even as the nation remained in political turmoil over its plans to leave the bloc altogether. No exit polls were expected Thursday night from the UK voting.

The elections come as support is surging for populists and nationalists who want to rein in the EU's powers and strictly limit immigration. Meanwhile, Europe's traditional political powerhouses, both conservative and left-wing, insist that unity is the best buffer against the shifting economic and security challenges posed by an emerging new world order.

But populists across several countries have united to challenge those centrist forces. On Saturday, Italy's anti-migrant Interior Minister Matteo Salvini was joined at a rally by 10 other nationalist leaders, including far-right leaders Wilders, Marine Le Pen of France's National Rally party and Joerg Meuthen of the Alternative for Germany party. 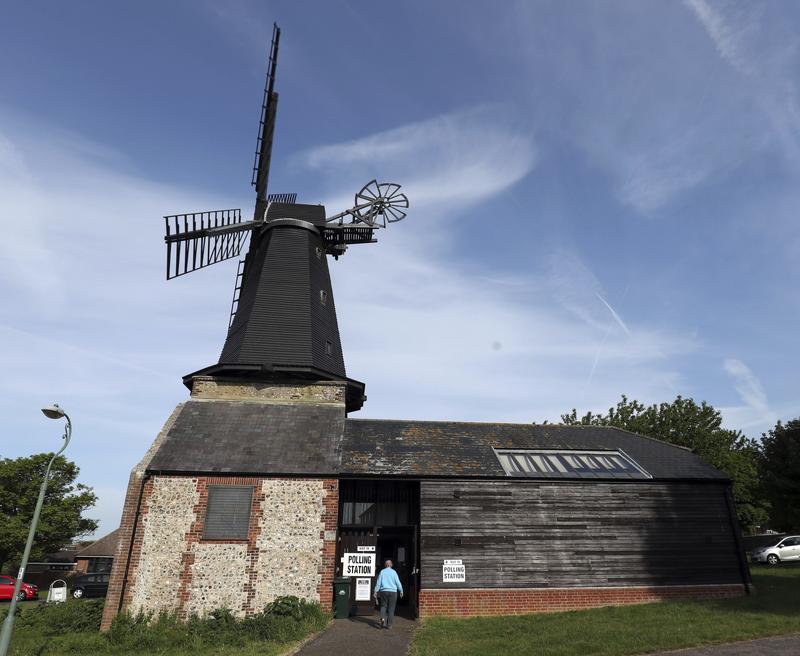 A woman arrived at a polling station located in West Blatchington Windmill near Hove, south east England, May 23, 2019, as polls opened in elections for the European Parliament. (STEVE PARSONS / PA / AP)

Wilders vowed to keep fighting the populist cause even after his party's projected big defeat.

"We had hoped for more seats," Wilders said in a statement. "But with one seat in the European Parliament we will, together with our European friends, fight even harder against the EU monster, Islam and mass-migration."

Voters across Europe are electing 751 lawmakers, although that number is set to drop to 705 when Britain eventually leaves the EU. The UK has 73 European lawmakers, who would lose their jobs when their country completes its messy divorce from the EU. Some of its seats will be reassigned to other EU member states.

The British vote may have a direct impact on the future of embattled Prime Minister Theresa May, whose Conservative Party appears to be losing support amid a prolonged Brexit impasse. May has tried but failed for months to get lawmakers in the British Parliament to back her plan to leave the EU.

Both the Conservatives and Labour in Britain were predicted to be heading for an electoral pasting in Thursday's vote, due to the chaos over Brexit. Results of the vote will be announced Sunday night, and a poor showing for the Conservatives would increase the calls for May to step down as party leader, which would set in motion a leadership contest.

Britain's Brexit party, led by Nigel Farage, has appeared to gain strength in recent voter surveys. Farage voted Thursday, then declared that he hopes to have the shortest possible tenure as a member of the European Parliament because he wants Britain to leave the EU as quickly as possible. 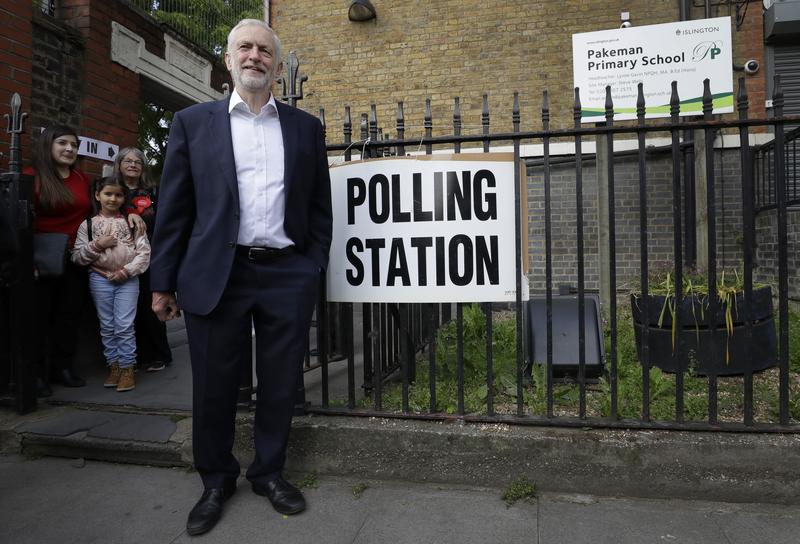 Jeremy Corbyn leader of Britain's opposition Labour Party after voting in the European Elections in London, May 23, 2019. (KIRSTY WIGGLESWORTH / AP)

"If you want Brexit, you've got to vote Brexit," he said, warning lawmakers from Britain's two major parties — Conservatives and Labour — that they will be vanquished at Britain's next general election unless they respect voters' desire to leave the EU.

Voting in Britain was marred by the inability of hundreds of the 3 million EU citizens in Britain to vote despite having a legal right to do so. EU citizens who wanted to vote in Britain had to complete a form confirming they would not be voting in their homelands. Some say they did not receive the forms.

The Electoral Commission blamed the problem on the short notice that officials had to prepare for the election, which would not have been held in Britain if the country had left the EU in March, as planned.