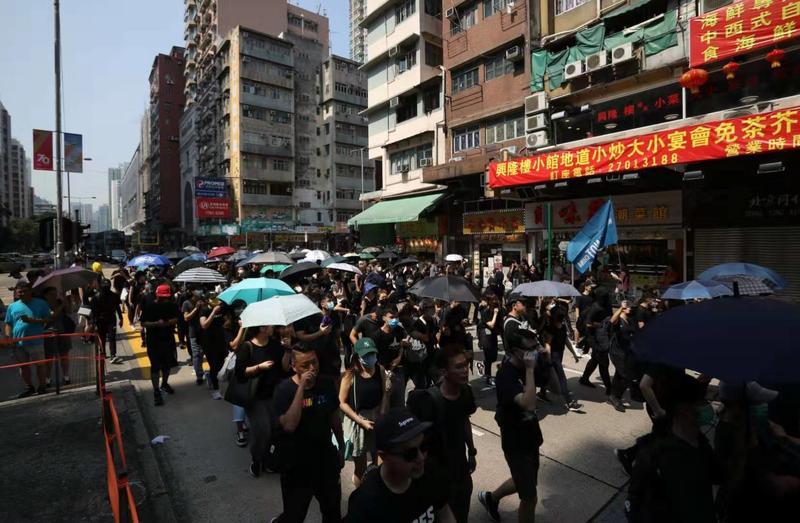 HONG KONG - A relatively peaceful start to Oct 1 was undermined when protesters began staging unsanctioned rallies and demonstrations in different districts of Hong Kong, with violence erupting in different pockets of the city.

The government and police force have warned the public not to take part in such events, and called on members of the public to remain vigilant and mind their own safety.

READ MORE: Public urged not to participate in unapproved protests

Radicals continued to damage public properties and buildings extensively across the territory, posing a serious threat to peace and order in the ctiy, according to a statement issued by the Hong Kong Special Administrative Region's government. Radicals damaged the government offices in various districts, smashing up glass panes and facilities. Another group of radicals stormed MTR stations and damaged facilities there. Some even hurled gasoline bombs into train compartments in Tsuen Wan MTR station, and onto platforms in Tai Wai MTR station, according to the statement. Some violent protesters attempted to burn light poles and automatic teller machines, seriously endangering public order, according to the statement.

Rioutous mob also beat up passers-by in various districts, taking the law into their own hands, according to the statement.

Police expressed the strongest condemnation against all violent acts, and are conducting dispersal and arrest operations in various districts.

Police said in a statement that there had been rioting acts across Kowloon, Hong Kong Island and the New Territories, with radicals setting fires and committing mass property damage, injuring many people.

Police appealed to members of the public to stay in safe places and avoid going outdoors. 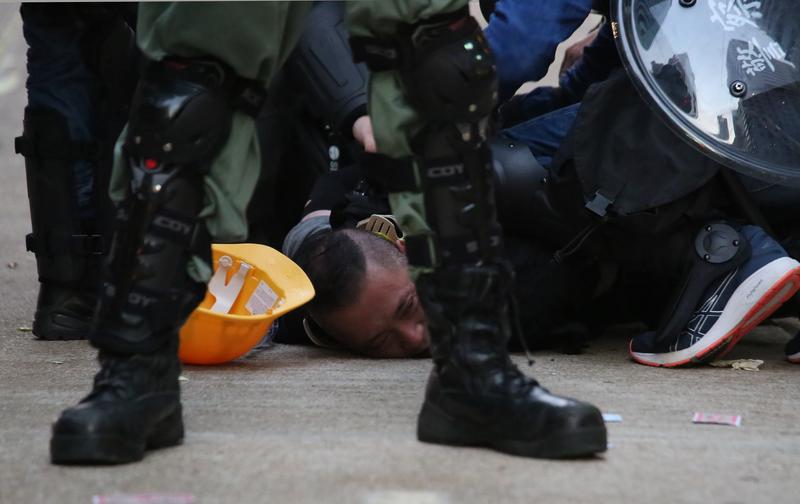 MTR Corp announces closure of 25 out of 91 stations, with the entire Tsuen Wan line suspended. 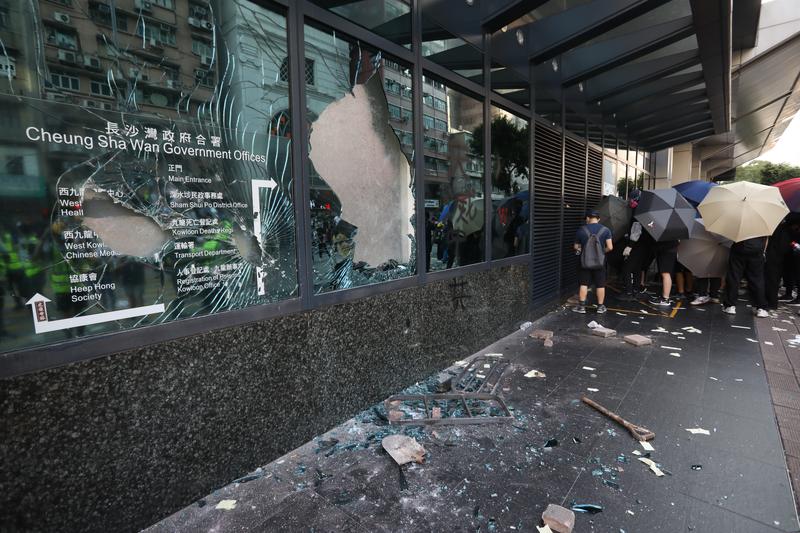 Radicals take cover under umbrellas after smashing up the glass front of the government offices in Cheung Sha Wan in Hong Kong on Oct 1, 2019. (PHOTO / CHINA DAILY)

Meanwhile in Cheung Sha Wan in Kowloon, radicals smashed the glass front of government offices there.

Protesters, refusing to disperse on Harcourt Road, lob bricks pried out of pavement and petrol bombs at police. Police respond with firing rounds of tear gas and rubber bullets. 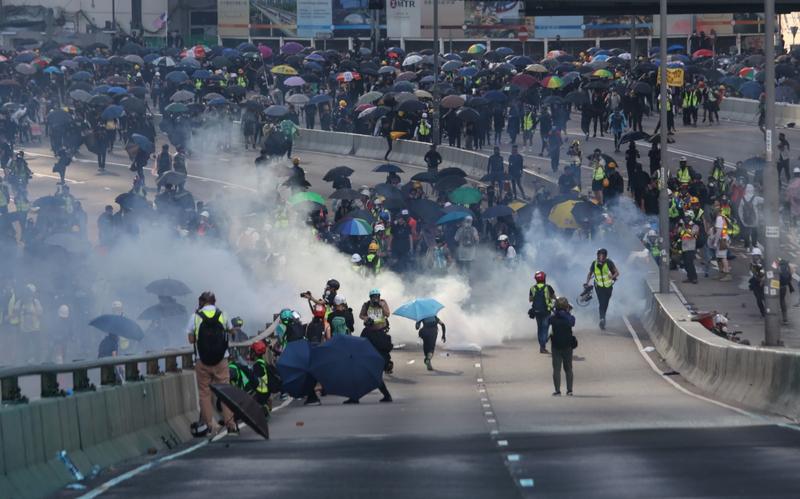 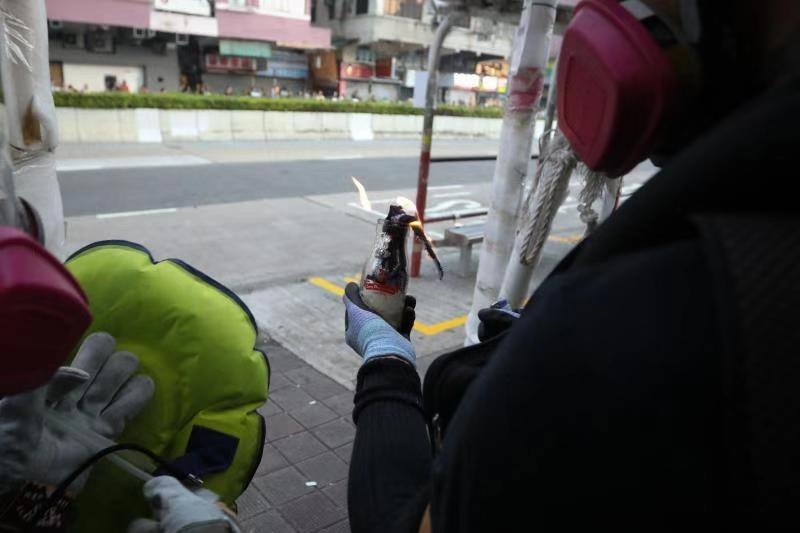 A protester has a gasoline bomb ready in hand during an illegal rally in Sham Shui Po, Hong Kong, Oct 1, 2019. (PHOTO / CHINA DAILY) 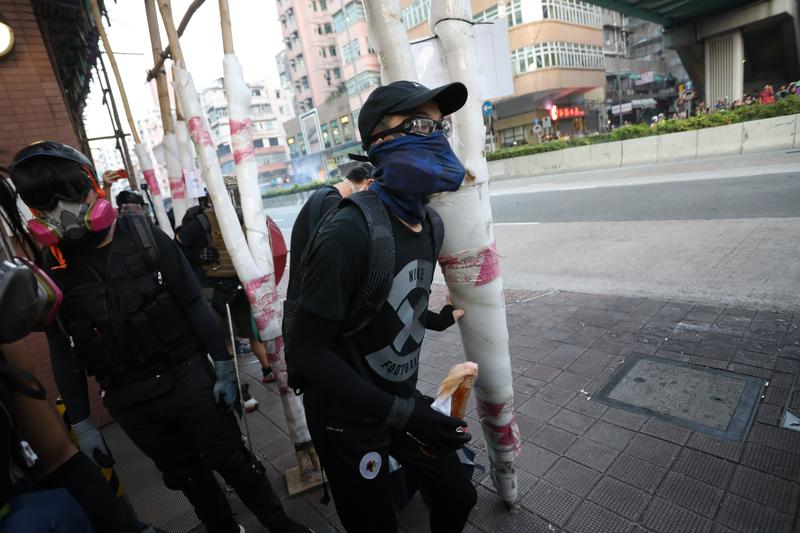 A protester has a gasoline bomb ready in hand during an illegal rally in Sham Shui Po, Hong Kong, Oct 1, 2019. (PHOTO / CHINA DAILY)

A fire was started near Castle Peak Road with some radicals seen trying to feed the flames. Around the same location earlier, protesters were seen interfering with traffic lights at a junction.

Around the same time, the MTR Corp announced that other than Mei Foo, Lai King and Central stations, all stations are closed on the Tsuen Wan line. 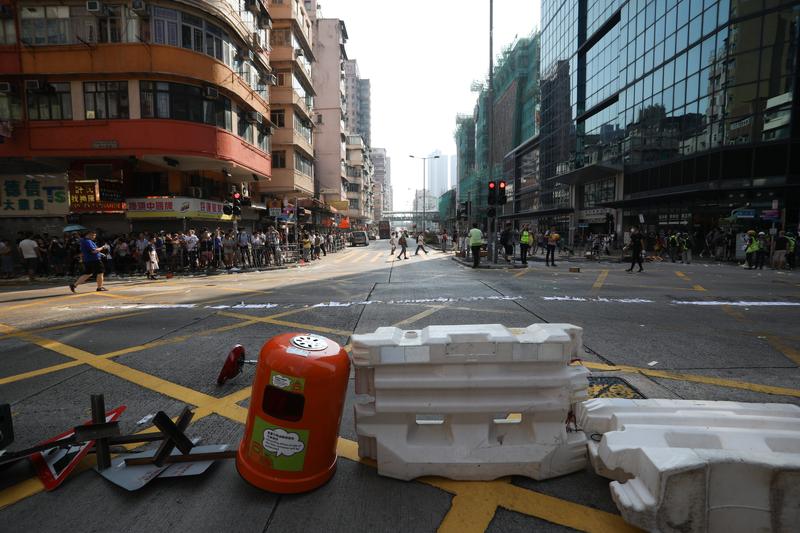 Demonstrators blocked a bus full of tourists from the mainland in Connaught Road Central, heckling them with the chant, "Go back to mainland."

HK's sole rail operator, MTR Corp announced that it was shutting Tsim Sha Tsui station - the 17th station to close during the day.

Police issued a strong condemnation after rioters threw corrosive fluid in Tuen Mun, injuring multiple police officers and reporters. Police appealed to the members of the public to take care of personal safety. 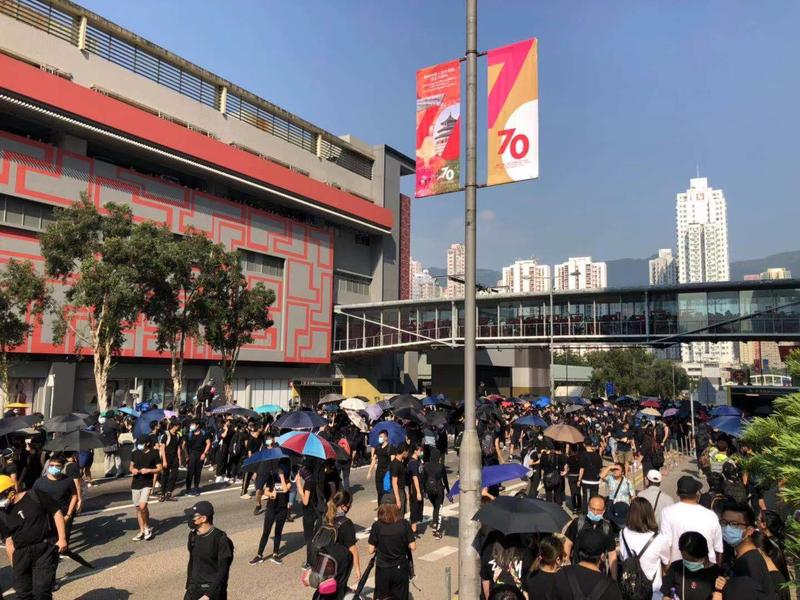 Police gear up to take action in Tuen Mun as two more rounds of tear gas are fired at Wong Tai Sin a little before 3 pm. Distinct pockets of violence in Sha Tin, Sham Shui Po and Wong Tai Sin.

In Wong Tai Sin, protesters were seen digging up bricks from pavements under the cover of open umbrellas.

The MTR Corp., the city's sole rail operator, announced that it was closing Kwai Fong, Kwai Hing, Diamond Hill and Tai Wo Hau stations, bringing the total number of stations to suspend service to 15. 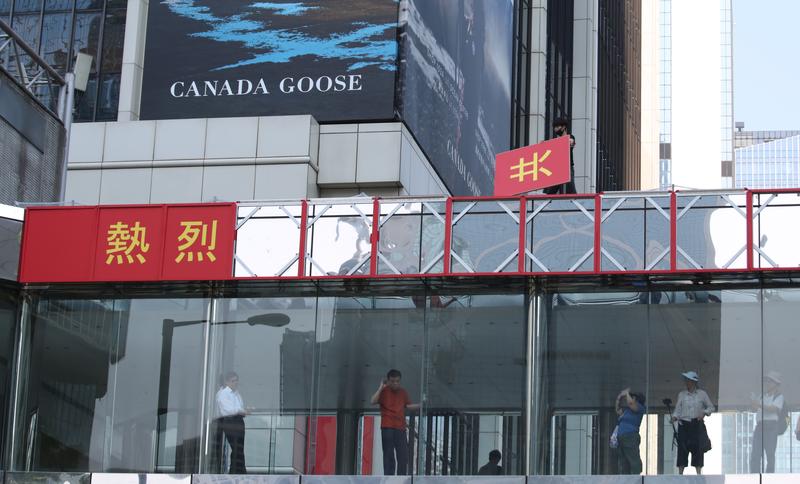 A protester is seen taking down a celebratory National Day poster from an overbridge at Admiralty in Hong Kong on Oct, 1, 2019. (PHOTO / CHINA DAILY)

Protesters are seen taking down celebratory National Day posters from an overbridge near Pacific Place in Admiralty even as some more are seen emptying rubbish carts outside at least one shuttered exit of Admiralty MTR station.

Tear gas is fired in Wong Tai Sin as protesters and police stand off in a narrow alley and scuffles break out between police and protesters in Tuen Mun. A fire is started at Tsuen Wan.

In Tuen Mun, protesters wielding umbrella and sticks are clashing with police who are using pepper spray.