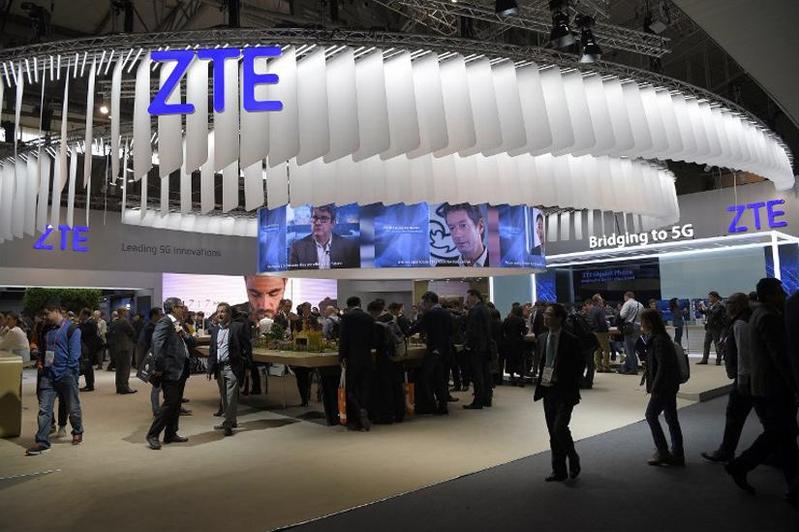 In this Feb 27, 2017 photo, visitors pass in front of the ZTE stand on the first day of the Mobile World Congress in Barcelona in Barcelona. The Chinese telecommunications equipment maker has teamed up with global carriers to test and verify 5G technical performance. (LLUIS GENE / AFP)

The company has teamed up with global carriers to test and verify 5G technical performance in a bid to achieve a stronger market share position in the coming 5G era.

“We have some significant breakthroughs in the 5G infrastructure development compared with 4G. As we have an approximately 35 percent market share in the 4G market, we believe we will have more market share in the 5G era,” Fan Xiaobing, a senior vice-president at ZTE, said at the company’s global 5G event in Hong Kong on Wednesday.

“The research and development investment is very important for in the process of developing 5G infrastructures. Last year we spent about 12 percent of our revenue on R&D, and his year we will also spend more than 10 percent of revenue on R&D,” Fan added.

ZTE has partnered with Italy’s largest mobile operator Wind Tre and the country’s wholesale fiber network operator Open Fiber to build Europe’s first 5G pre-commercial network in the 3.6 to 3.8GHz band, and help them to upgrade the existing 4G network into 5G network.

It has also signed 5G strategic partnerships with the three largest telecommunications operators in the mainland – China Mobile, China Telecom and China Unicom – as well as Japan’s Softbank, Telefonica from Spain, Belgium’s Telenet and South Korea’s KT to equip them with the latest 5G solutions.

“China Mobile may try to launch 5G services in 2019, ahead of the original schedule of 2020, as it is aggressively pushing for the launch of the next-generation network in China,” said Fan, mentioning that the chip that supports the 5G network may roll out next year and the first batch of handsets to support 5G may come to the market after that.

Unlike the 3G or 4G era where different standards apply in various parts of the industry, international authorities overseeing the creation of a unified standard for 5G mobile technologies are expected to release initial specifications next year and go into the final phase in 2019, paving the way for commercial deployment of 5G services by mobile network operators from 2020.

ZTE also signed a 5G and Internet of Things MOU with India’s largest state-owned operator Bharat Sanchar Nigam to help them evaluate and verify key technologies such as Pre5G, 5G wireless systems, virtualized network architectures, as well as the construction of 5G ecosystems for the purpose of research and commercialization in India.

With ZTE’s network rolled out all over the world, the market seems to have more confidence in the company. Its share price rose significantly this month from a low of HK$26 per share on Nov 2 to the highest HK$32.30 on Nov 21 before moderating to HK$28.65 at the Wednesday close.