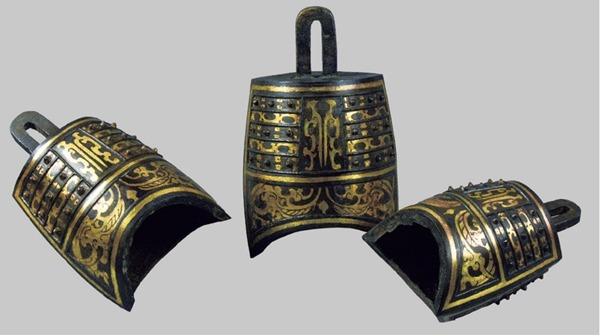 Bronze chimes unearthed from the tomb of the Marquis Haihun. (PHOTO PROVIDED TO CHINA DAILY)

When you look at the treasures unearthed at the tomb of the Marquis Haihun, anyone with even the most basic grasp of archaeology would be astounded by this literally "glittering" discovery.

A total of 478 ingots and gold plates weighing around 115 kilograms were found in his tomb, which dates back to the Western Han Dynasty (206 BC-AD 24), in Nanchang, Jiangxi province

A total of 478 ingots and gold plates weighing around 115 kilograms were found in his tomb, which dates back to the Western Han Dynasty (206 BC-AD 24), in Nanchang, Jiangxi province. They are just a small sample of the roughly 10,000 artifacts recovered from the site.

Archaeologists there unearthed the earliest portrait of Confucius ever found, alongside a particular edition of The Analects of Confucius written on scores of bamboo slips that was thought to have disappeared from history around 1,800 years ago.

Other highlights include the discovery of a funerary pit filled with the remains of chariots and horses-the only one of its kind to be found south of the Yangtze River-and an "underground orchestra"-a stash of musical instruments made of bronze. An array of exquisite jade pieces and lacquer ware was also unearthed at the site, according to Yang Jun, one of the archaeologists from the Jiangxi Provincial Institute of Cultural Relics and Archaeology leading the excavations.

Chinese scholars generally consider the tomb's contents to be among the most important archaeological discoveries in the country in recent years.

Together with nine other recent key discoveries from around the world, the tombs were bestowed with the Field Discovery Award at the fourth biennial Shanghai Archaeology Forum on Saturday, which is jointly hosted by the Chinese Academy of Social Sciences and the Shanghai municipal government. The forum runs until Dec 17.

The 10 sites stood out from more than 100 important finds nominated by over 200 archaeologists from 46 countries. They were chosen by a selection committee composed of 40 scholars from 18 countries.

A seal recovered from a coffin confirmed that the tomb belonged to Liu He, a short-lived ruler during the Western Han era, who was dethroned after just 27 days due to misconduct. But he was allowed to reside in today's Nanchang under the title of the Marquis Haihun.

"Since many of artifacts from the tombs were used by him during his lifetime, rather than simply being funerary objects, you can appreciate what an affluent life he lived," Yang says. "It's rare to find a burial site of a Western Han marquis so preserved and intact, and the discovery offers us extraordinarily comprehensive insights into society at that time."

Yang says many exotic artifacts were unearthed there, revealing a much broader picture of the cross-cultural exchanges taking place in the region at that time. 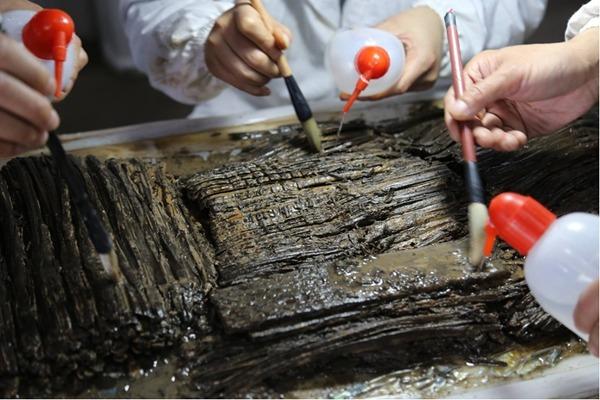 For example, a camel image on the hangers of bronze chimes and a decorated horse mask in the shape of a unicorn goat illustrate this exoticism. So does the vast array of carnelian beads, crystals and the glass inlays found on the ingots.

"It's clear that they entered China via the Silk Road," Yang says. "They have given us a rare insight into the cultural interactions taking place between China and the West at that time."

Another award-winning discovery unveiled at the forum reflects the booming international trade across the South China Sea around the time of the Marquis Haihun's reign.

In southern Thailand, Berenice Bellina, a researcher with the French National Centre for Scientific Research, has led studies on the Isthmus of Kra to learn more about the peak of the Maritime Silk Road. Excavations and surveys at 36 sites have unveiled the existence of previously little-known trade hubs in the region between the fourth and first centuries BC.

"They have already revealed the development of the complex urban and political models in the region, and an elaborate and organized economic network," Bellina says.

She adds that archaeological evidence has shown that a large volume of products from China and India were shipped to the region where they were redistributed-along with their production techniques.

"The Maritime Silk Road led to the emergence of complex polities and economic specialization," she says. "A pattern of globalization then resulted from the joint construction of the network of port cities and their multiethnic hinterlands."

However, the world's international trade began much earlier than that, as other awardees in Shanghai reflect. Going further back-millennia even-Kultepe, a city mound on the Turkish plateau of Anatolia, has emerged as a highlight of archaeological studies.

Fikri Kulakoglu from Ankara University considers it to be the first international long-distance trade center in Anatolia, known historically as Karum of Kanesh.

According to Kulakoglu, about 23,000 cuneiform tablets featuring Old Assyrian and dating back to about the 18th century BC offer exceptional insights into a sophisticated market economy, representing one of the best-documented cases of ancient trade.

"Recent excavations also reveal a rich collection of stamps and seal impressions, which present concrete evidence of an international trading system," he explains.

Additionally, ceramics and jewelry unearthed from this Bronze Age site indicate Kultepe had a wide distribution network, stretching across Mesopotamia to the Aegean Sea.

"Perhaps, they show the mutual exchange of gifts between kings and elites, or perhaps a dowry," Kulakoglu says.

Speaking of the Aegean Sea, recent excavations led by Colin Renfrew, a globally renowned archaeologist from the University of Cambridge, have been undertaken on the islets of Keros and Dhaskalio in the Greek archipelago of Cyclades, apparently revealing a "foreshadowing urbanization and globalization". The work was also recognized with a Field Archaeology Award at the Shanghai event.

Early Bronze Age sanctuaries were discovered along with infrastructure, including drainage networks, monumental constructions and metallurgy workshops, dating back to around 2500 BC. Renfrew thinks these show major changes in social relations as pilgrims arrived from the Greek mainland, which is 200 kilometers away.

"Analysis of this new data will make a great contribution to understanding the role of ritual practices in catalyzing wider social change," he says.

Wang Wei, secretary general of the Shanghai Archaeology Forum and president of the Chinese Society of Archaeology, sees a trend among the recent award winners-stronger emphases on exchanges among different regions.

"Exchanges of precious objects and technologies indicate that globalization came into being much earlier than people usually think," Wang says. "It also proves that any civilization that secludes itself is destined to develop slowly. Prosperity only comes through mutual learning.

"Archaeologists now tend to offer historical references for the development of modern society. Countries in today's world can therefore be inspired to find the answers to cultural differences."

The Shanghai Archaeology Forum was founded in 2013 to promote archaeological inquiries into past civilizations worldwide in a bid to understand the relevance of this knowledge to the contemporary world.

The theme of this year's forum is "archaeology for urbanization and globalization: the past for the common future of humankind".

Wang says the forum has also become a key platform for exchanges between Chinese archaeology luminaries and their overseas counterparts.

He believes the global trend of interdisciplinary studies introducing various hi-tech approaches will keep inspiring Chinese archaeologists. For example, in the case of Kultepe, the method of archaeomagnetism-the interpretation of the Earth's magnetic field at times in the past as recorded in archaeological materials-was used to date the relics. This technique is not commonly used in China. 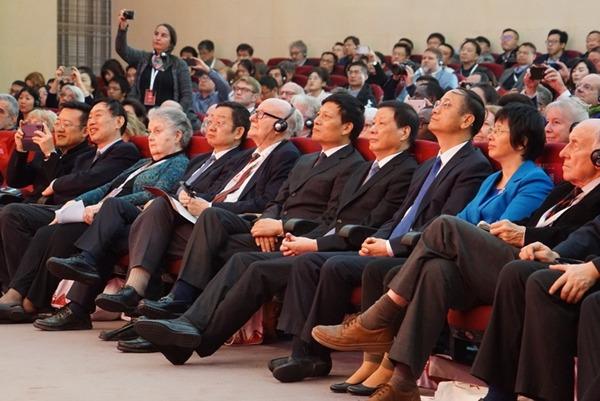 Scholars from around the world attend the fourth Shanghai Archaeology Forum held from Dec 14 to 17. (PHOTO PROVIDED TO CHINA DAILY)

The forum enables archaeologists who've discovered methods and gained experience not yet found in the rest of the world to share their findings.

"In the past, information about the latest discoveries made by Chinese archaeologists was not always sufficient, largely due to the language barrier of academic journals," he recalls. "The significance of early Chinese civilization was not fully understood."

No particular section introducing Chinese archaeology featured in the inaugural forum. That changed, however, after the discovery of the Ruins of Liangzhu, a vast city that existed from 5,300 years to 4,300 years ago in Hangzhou, Zhejiang province, won the Field Archaeology Award that same year. The discovery of its highly developed jade culture, belief systems and water conservancy amazed attending scholars.

Renfrew said at the time: "The importance of findings from the Neolithic Age in China has been greatly underestimated... The complexity of society in Liangzhu was on par with that of a country." He also believes that Liangzhu is an origin of Chinese civilization.

Consequently, in his case study of sanctuaries on Dhaskalio-roughly contemporary to Liangzhu-he specifically adds the ancient Chinese city's ruins into his comparative studies of "early centers of congregation".

READ MORE: Sights, sounds and scents from a sparkling thread

"International scholars are eager to know more about Chinese archaeology," Wang says. "That's why we specifically organized a seminar on this year's forum to review a panorama of the most important ongoing archaeological projects in China.

"In addition to the tomb of the Marquis Haihun, we have many more to impress the world with," he says.