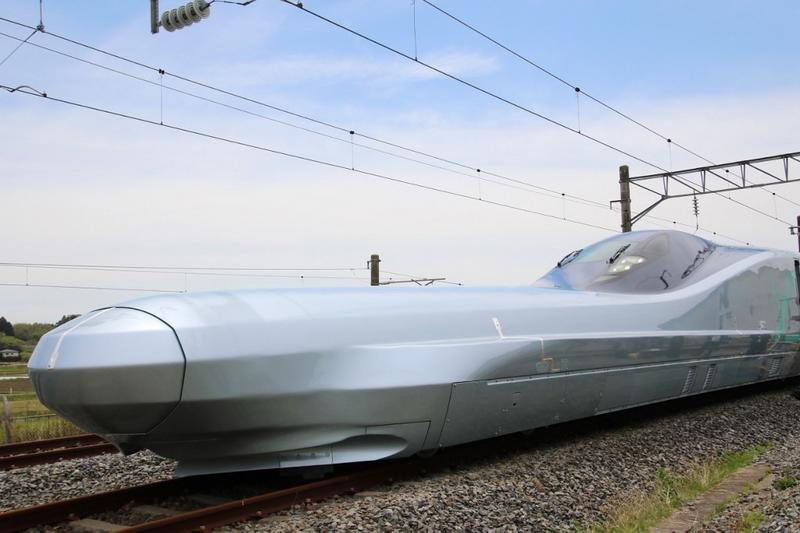 Japan is pushing the limits of rail travel as it begins testing the fastest-ever shinkansen bullet train, capable of speeds of as much as 400 kilometers per hour.

Called the Alpha-X, the train is scheduled to go into service in 2030. Rail company JR East plans to operate it at 360 kilometers per hour. That would make it 10 kph faster than China’s Fuxing Hao, which links Beijing and Shanghai and has the same top speed.

To cope with massive wind resistance when entering tunnels, the Alpha-X’s first car will mostly be a sleek nose, measuring 22 meters. With just three windows, there looks to be hardly any space, if at all, for passengers in the front. Painted in metallic silver with green stripes, the 10-car bullet train begins test runs Friday between the cities of Aomori and Sendai at night.

The development of the next-generation shinkansen is based on the key concepts of superior performance, a high level of comfort, a superior operating environment and innovative maintenance

Japan’s bullet trains, which made their debut in the same year as the 1964 Tokyo Olympics, have become a symbol of the country’s focus on efficiency and reliability. Shinkansens are rarely late, even though they depart Tokyo Station every few minutes for Osaka, Kyoto and other destinations across the archipelago, making them a viable alternative to air travel. The Alpha-X is a key part of a plan to offer faster services to Sapporo, the biggest city on the northernmost island of Hokkaido.

“The development of the next-generation shinkansen is based on the key concepts of superior performance, a high level of comfort, a superior operating environment and innovative maintenance,” East Japan Railway Co, better known as JR East, said in a statement.

Although the Alpha-X holds the title of the world’s fastest train right now, it may already be dethroned by the time it goes into service. That’s because a new maglev line is being built between Tokyo and Nagoya with operations starting in 2027. Traveling mostly through deep tunnels, the magnetically levitated train will travel at a top speed of 505 kilometers per hour, cutting the time between the two cities to 40 minutes, from the current 110 minutes.

Five Things to Know About the Alpha-X

Stopping is just as important. The new bullet train will have air brakes on the roof and also use magnetic plates near the rails to slow down, in addition to conventional brakes. The train will have dampers and air suspension to keep it stable when traversing curves, maintaining its balance and comfort for passengers. Alpha-X stands for “Advanced Labs for Frontline Activity in rail eXperimentation.” The new train is based on JR’s E5 platform, which already operates on major routes in Japan. JR East will link data between the train, control center, maintenance facilities and staff to monitor performance and keep the trains operating at optimal levels.