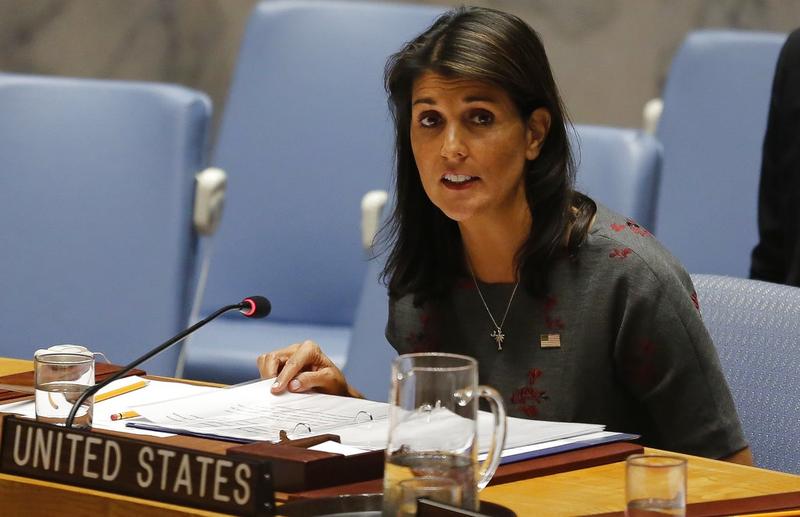 United States UN Ambassador Nikki Haley address a UN Security Council meeting on alleged Russian chemical attack in Britain, Sept 6, 2018 at UN headquarters. Haley expressed disappointment in the panel monitoring sanctions against DPRK "for caving to Russian pressure and making changes to what should have been an independent report."(BEBETO MATTHEWS / AP)

UNITED NATIONS — The United States accused Russia on Thursday of pressuring an independent panel of UN experts to alter a report on sanctions against the Democratic People's Republic of Korea (DPRK) that included alleged sanctions violations "implicating Russian actors."

US Ambassador Nikki Haley expressed disappointment in the panel monitoring sanctions against DPRK "for caving to Russian pressure and making changes to what should have been an independent report." She called it "a stain" on the experts' important work.

Haley said the panel should release the original report, which cited "a massive increase in illicit ship-to-ship transfers of petroleum products" for DPRK in violation of UN sanctions. It said some products allegedly were off-loaded from Russian ships.

Russian Ambassador Vassily Nebenzia said in late August that he put a hold on the report's release "because we disagree with certain elements" that he refused to disclose.

A summary of the experts report obtained in early August by The Associated Press also said DPRK has not stopped its nuclear and missile programs. And it said DPRK is violating sanctions by transferring coal at sea and flouting an arms embargo and financial sanctions.

The dispute between Russia and the US as well as Western and other Security Council members has delayed the official release of the six-month report by the expert panel monitoring sanctions against DPRK.

After the initial experts' report was released, Russia blocked the UN from imposing sanctions on Russia-based entities and vessels sanctioned a week earlier by the US Treasury Department.

The Security Council has remained united in imposing tougher and tougher sanctions on DPRK, but the differences over the experts' report mark a first dent in that unity.

UN diplomats familiar with discussions said Russia was angered that the panel used a lot of US intelligence in the initial report that Moscow claimed was incorrect. The diplomats spoke on condition of anonymity because talks were private.