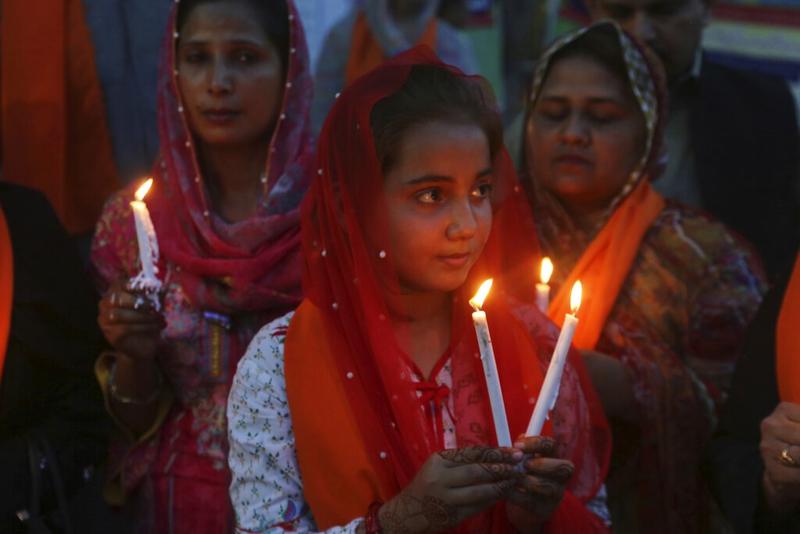 Pakistani citizens light candles at a vigil for the victims of bomb explosions in churches and hotels in Sri Lanka, in Lahore, Pakistan, April 23, 2019. (KM CHAUDARY / AP)

COLOMBO, Sri Lanka — As the death toll from the Easter bombings in Sri Lanka rose to 359 on Wednesday, the Islamic State group claimed responsibility and released images that purported to show the attackers, while the country's prime minister warned that several suspects armed with explosives are still at large.

Sri Lankan authorities have blamed the attacks on National Towheed Jamaar, a little-known Islamic extremist group in the island nation

Investigations by Sri Lankan police have confirmed that nine suicide bombers were involved in Sunday Easter's attacks, eight of whom have been identified, State Defense Minister Ruwan Wijewardene said.

Another top government official said the suicide bombings at the churches, hotels and other sites were carried out by Islamic fundamentalists in apparent retaliation for the New Zealand mosque massacres last month that a white supremacist has been charged with carrying out.

The Islamic State group, which has lost all the territory it once held in Iraq and Syria, has made a series of unsupported claims of responsibility and Prime Minister Ranil Wickremesinghe said that investigators were still determining the extent of the bombers' foreign links.

Sri Lankan authorities have blamed the attacks on National Towheed Jamaar, a little-known Islamic extremist group in the island nation. Its leader, alternately known as Mohammed Zahran or Zahran Hashmi, became known to Muslim leaders three years ago for his incendiary speeches online.

The IS group's Aamaq news agency released an image purported to show the leader of the attackers, standing amid seven others whose faces are covered. The group did not provide any other evidence for its claim, and the identities of those depicted in the image were not independently verified. 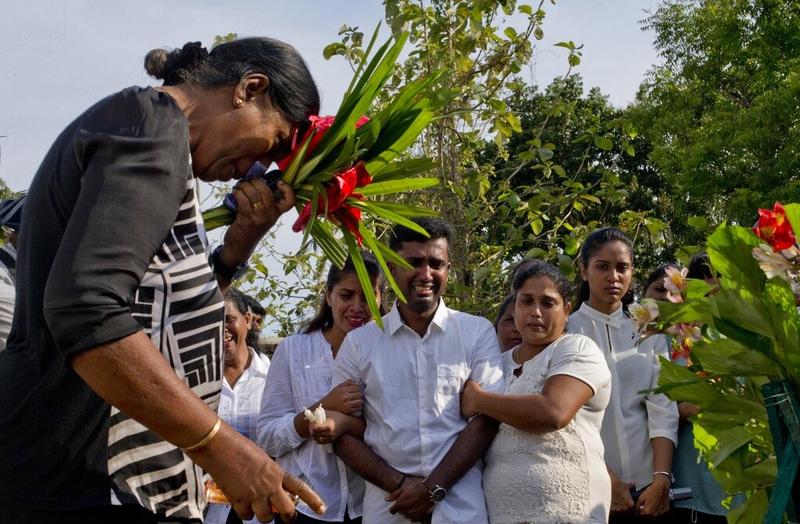 Meanwhile, in an address to Parliament, Ruwan Wijewardene, the state minister of defense, said "weakness" within Sri Lanka's security apparatus led to the failure to prevent the nine bombings.

"By now it has been established that the intelligence units were aware of this attack and a group of responsible people were informed about the impending attack," Wijewardene said. "However, this information has been circulated among only a few officials."

In a live address to the nation late Tuesday, Sri Lanka President Maithripala Sirisena said he also was kept in the dark on the intelligence about the planned attacks and vowed to "take stern action" against the officials who failed to share the information. He also pledged "a complete restructuring" of the security forces.

Wijewardene said the government had evidence that the bombings were carried out "by an Islamic fundamentalist group" in retaliation for the March 15 mosque shootings in Christchurch, New Zealand, that killed 50 people, although he did not disclose what the evidence was. 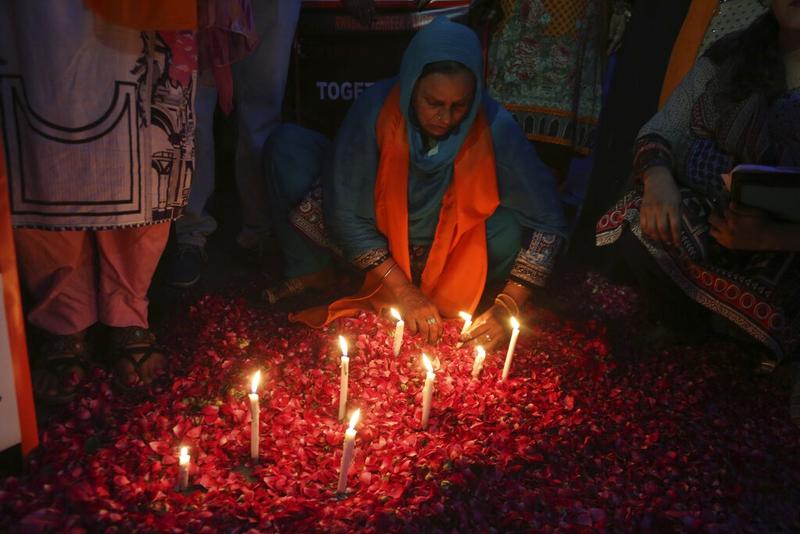 A Pakistani woman lights candles during a vigil for the victims of bomb explosions in churches and hotels in Sri Lanka, in Lahore, Pakistan, April 23, 2019. (KM CHAUDARY / AP)

The office of New Zealand Prime Minister Jacinda Ardern issued a statement responding to the Christchurch claim that described Sri Lanka's investigation as "in its early stages."

"New Zealand has not yet seen any intelligence upon which such an assessment might be based," it said. An Australian white supremacist, Brenton Harrison Tarrant, was arrested in the Christchurch shootings.

As Sri Lanka's leaders wrangled over the apparent intelligence failure, security was out in force for a national day of mourning Tuesday.

In the city of Negombo, Cardinal Malcolm Ranjith, the archbishop of Colombo, held a funeral service in the courtyard of St. Sebastian Church, where 110 people were killed in one of the bombings. Hundreds of military and police personnel attended the service, and nuns, priests and community members were frisked as they arrived. 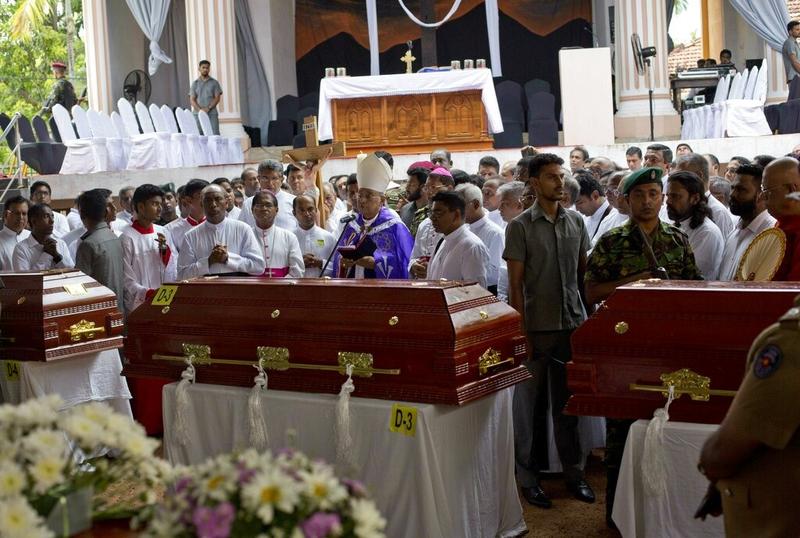 Because of the toll, the service lasted several hours, with caskets brought in three and four at a time, accompanied by sobbing relatives. The coffins were then taken to a mass burial site and covered by three earth movers.

Elsewhere in Negombo, where soldiers stood every few feet, private memorials were held with tents set up on lawns for guests.

Also Tuesday, the military employed special police powers that it last used during a devastating civil war that ended in 2009. Among the 40 people arrested on suspicion of links to the bombings were the driver of a van allegedly used by the suicide attackers and the owner of a house where some of them lived.

A nationwide curfew began at 9 pm.

In some places, entire families fell victim. On Easter, as they did every Sunday, Berlington Joseph Gomez and his wife, Chandrika Arumugam, went to church at Colombo's St Anthony's Shrine. And as always, they brought their three sons: 9-year-old Bevon, 6-year-old Clavon and 11-month-old Avon. 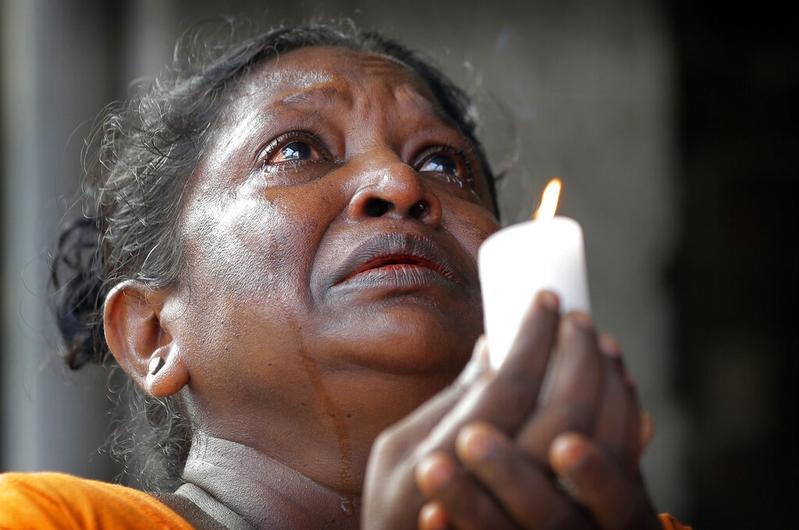 Two days later, they were all being mourned by dozens of neighbors gathered at the modest home of Berlington's father, Joseph Gomez.

"All family, all generation, is lost," Gomez said.

Word from international intelligence agencies that the local group National Towheed Jamaar was planning attacks apparently didn't reach the prime minister's office until after the massacre, exposing the continuing turmoil in the highest levels of government.

On April 11, Priyalal Disanayaka, the deputy inspector general of police, signed a letter addressed to directors of four Sri Lankan security agencies, warning them a group was planning a suicide attack.

The intelligence report attached to his letter, which has circulated on social media, identified the group as National Towheed Jamaar and its leader as Zahran Hashmi, and said it was targeting "some important churches" in a suicide attack that was planned to take place "shortly."

The report identified six individuals likely to be involved in the plot, including someone it said had been building support for Zahran and was in hiding since the group clashed with another religious organization in 2018. 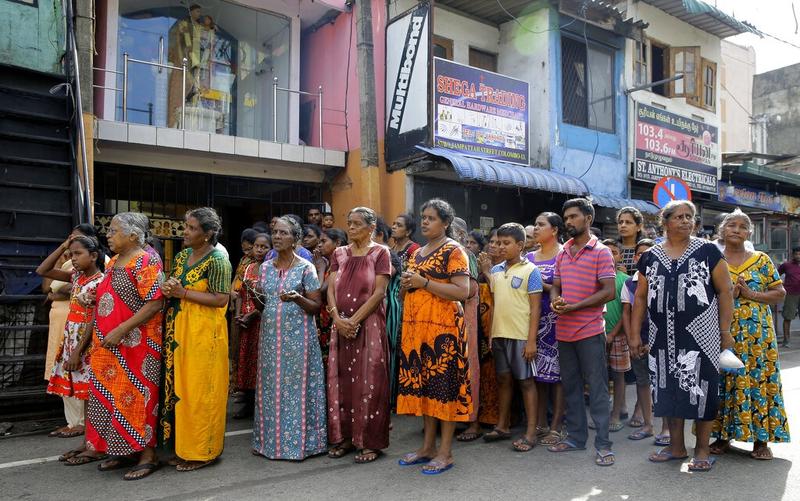 On Monday, Sri Lanka's health minister held up a copy of the intelligence report while describing its contents, spurring questions about what police had done to protect the public. It was not immediately clear what steps were taken by any of these security directors. Disanayaka did not answer calls or messages seeking comment.

Heightened security was evident at an international airport outside the capital where security personnel patrolled with explosives-sniffing dogs, checked car trunks and questioned drivers. Police also ordered that anyone leaving a parked car unattended must leave a note with their phone number on it. Postal workers were not accepting pre-wrapped parcels.

A block on most social media since the attacks has left a vacuum of information, fueling confusion and giving little reassurance the danger had passed. Even after an overnight curfew ended, the streets of central Colombo were mostly deserted Tuesday and shops closed as armed soldiers stood guard.

Prime Minister Ranil Wickremesinghe said he feared the massacre could unleash instability and he vowed to "vest all necessary powers with the defense forces" to act against those responsible. At a later news conference, he warned that more militants and explosives were "out there."

Authorities said they knew where the group trained and had safe houses, but did not identify any of the seven suicide bombers, whose bodies were recovered, or the other suspects taken into custody. All seven bombers were Sri Lankans, but authorities said they strongly suspected foreign links. 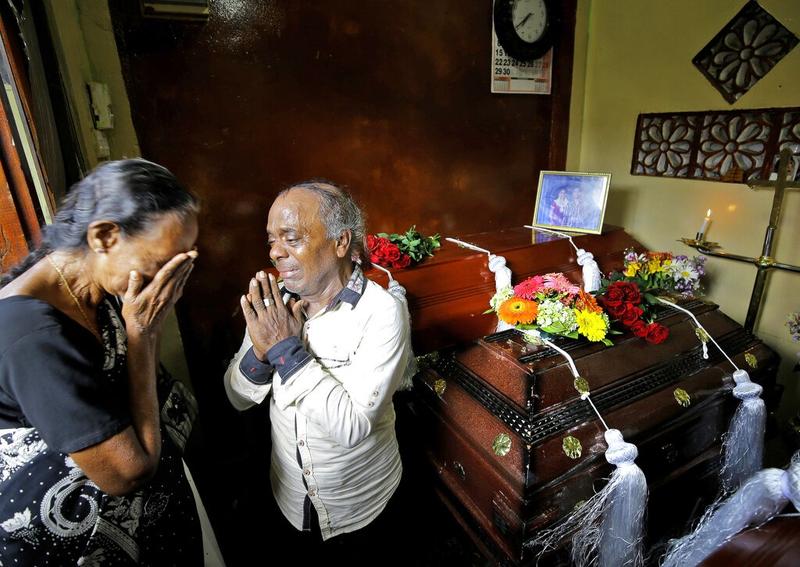 The history of Buddhist-majority Sri Lanka, a country of 21 million including large Hindu, Muslim and Christian minorities, is rife with ethnic and sectarian conflict.

In the nation's 26-year civil war, the Tamil Tigers, a powerful rebel army known for using suicide bombers, had little history of targeting Christians and was crushed by the government in 2009. Anti-Muslim bigotry fed by Buddhist nationalists has swept the country recently.

In March 2018, Buddhist mobs ransacked businesses and set houses on fire in Muslim neighborhoods around Kandy, a city in central Sri Lanka that is popular with tourists.

After the mob attacks, Sri Lanka's government also blocked some social media sites, hoping to slow the spread of false information or threats that could incite more violence.

Sri Lanka has no history of Islamic militancy. Its small Christian community has seen only scattered incidents of harassment.