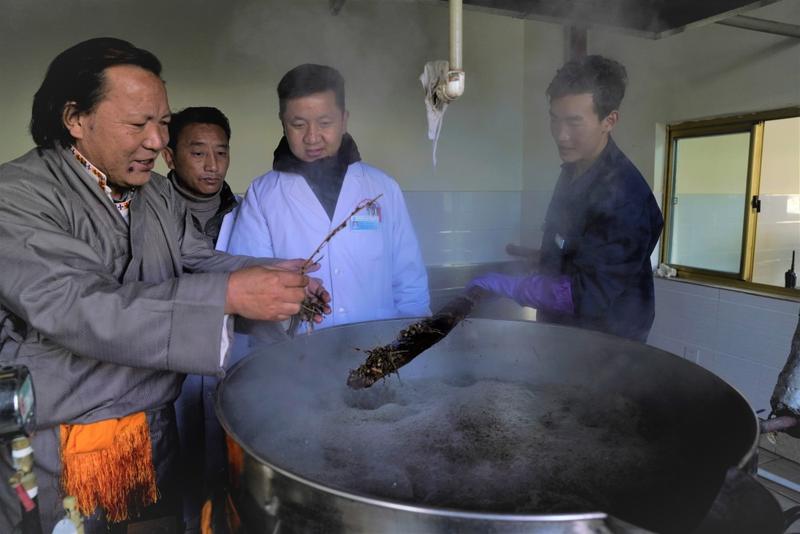 A master of traditional Tibetan bathing instructs his students in the proper procedure at a Tibetan hospital in Lhokha, Tibet autonomous region, Nov 2018.  (PHURBU TASHI / XINHUA)

The entry - officially listed as "Lum Medicinal Bathing of Sowa Rigpa: Knowledge and practices concerning life, health and illness prevention and treatment among the Tibetan people in China" - was added to the list during the 13th session of the Intergovernmental Committee for Safeguarding Intangible Cultural Heritage, held in Port Louis, Mauritius.

As the main component of traditional Tibetan medicine, the bathing practice is widely transmitted in the Tibet autonomous region, as well as among the Tibetan populations in Qinghai, Sichuan, Yunnan and Gansu provinces

The committee said in its decision that the element "underlines the importance of traditional knowledge concerning nature and the universe and offers a positive example of the sustainable relationship between humans and their environment".

In the Tibetan language, the word lum refers to the traditional knowledge and practices of bathing in natural hot springs, herbal water or steam to adjust the balance of body and mind, ensure health and treat illness. Sowa Rigpa refers to traditional Tibetan medicine.

According to the bid document submitted by the Ministry of Culture and Tourism, the theory behind medicinal bathing is based on five elements: sa (earth), chu (water), me (fire), lung (wind) and namkha (space).

Its practitioners include farmers, herdsmen and urban residents, with the manpa (physician), lum jorkhan (pharmacist) and manyok (assistant) having different responsibilities in the practice. It also embodies traditional Tibetan astrology, rituals, religions and many other aspects of daily life.

As the main component of traditional Tibetan medicine, the bathing practice is widely transmitted in the Tibet autonomous region, as well as among the Tibetan populations in Qinghai, Sichuan, Yunnan and Gansu provinces.

Nevertheless, the major hubs of lum medicinal bathing are in agricultural areas along the Yarlung Valley and the Tsongkha mountain range.

"The inscription will help improve the visibility of this intangible cultural heritage in general, as well as awareness of its significance. And it will encourage dialogue on health and respect for nature between different ethnic groups," said Zhang Xu, vice-minister of culture and tourism, and head of the Chinese delegation in Mauritius.

"It also demonstrates the great attention that the international community pays to intangible cultural heritage in the domain of knowledge and practices concerning nature and the universe," he said.

Some parts of lum medicinal bathing were placed on the national-level intangible cultural heritage list in 2008 and 2014.

According to Zhang, a coordination team was established by Tibet's department of culture in 2015, with wide participation from communities and practitioners.

Thanks to that, more institutions were established to promote academic research and community-level health practices. The medicinal bathing practice has been introduced into the curricula of local colleges. Primary and secondary school students can also learn through textbooks.

Guided by the ministry and supported by the National Center for the Safeguarding of Intangible Cultural Heritage in China, the team worked out a five-year plan (2019-23) with a monitoring system to ensure development of the heritage in the future.

"These inscriptions and selections reflect China's increasing capacity for safeguarding intangible cultural heritage, which is significant for improvements in the sense of identity and pride in the communities, groups and individuals concerned," Zhang said.

He added that enthusiasm for protection of heritage will contribute to the promotion of traditional Chinese culture as a whole.