By He Shusi, Li Bingcun and Dai Kaiyi in Hong Kong 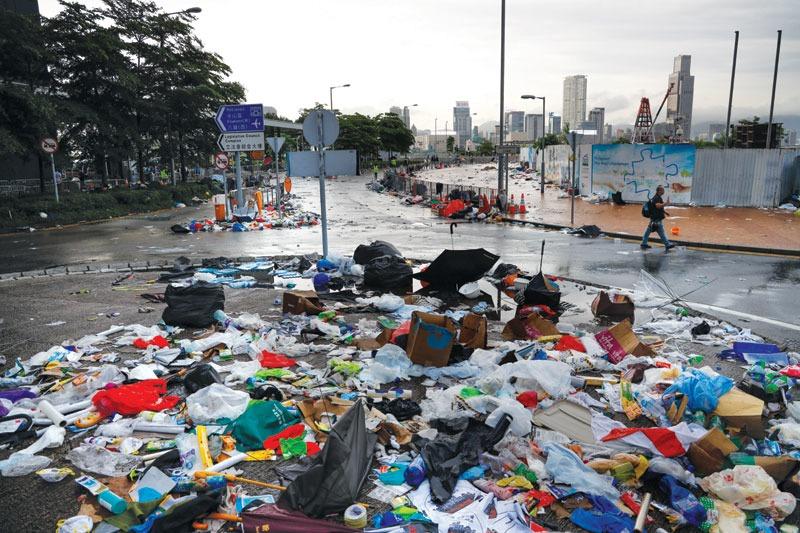 Trails of garbage inundate the streets near the Legislative Council Complex in Admiralty on June 13, one day after demonstrators protesting against the government’s proposed amendments to the city’s extradition laws resorted to “riot-like” means. (ROY LIU / CHINA DAILY)

Calls for calm and rational discussions on Hong Kong’s extradition bill were made on Thursday, after the city experienced chaos and economic losses due to Wednesday’s protest-turned-riot.

The appeals came after tens of thousands of demonstrators paralyzed Hong Kong’s core administrative and business area to halt deliberation of the extradition bill in the Legislative Council. During the protest, there were several violent clashes between radical demonstrators and riot police.

The government headquarters will remain closed on Friday due to security concerns. The scheduled second reading of the government’s extradition bill has been postponed to next week at the soonest

The rioting left 22 police officers and 81 protesters injured. Eleven demonstrators have been arrested for unlawful assembly, assaulting the police, disorderly conduct in a public place and other rioting-related crimes, according to police.

After being paralyzed for all of Wednesday, traffic in Admiralty, the area where the SAR government headquarters, LegCo and many international financial institutions are located, partially resumed on Thursday, with plastic bags, water bottles and umbrellas scattered on the roadway.

The government headquarters will remain closed on Friday due to security concerns.

The scheduled second reading of the government’s extradition bill has been postponed to next week at the soonest.

Hong Kong stocks dropped for a second consecutive trading session on Thursday, with market sentiment weighed down by fear that tensions between protesters and police remain high after the city’s violent demonstrations.

After an almost 500-point tumble in the morning session, the city’s Hang Seng Index cut its losses later in the afternoon and closed down by 0.05 percent, or 13.7 points, to 27,294.

Legislator Wong Ting-kwong, who represents the import and export sector in LegCo, called on Hong Kong to return to order soon, saying it will help address the international community’s concern over its business environment.

Responding to worries over Hong Kong’s stability and judicial independence, Wong said most of them were generated by a lack of understanding of Hong Kong society. He added that the demonstrators’ violent methods were threatening public safety.

Wong called on the government to better explain the issue to the public. “As social stability is restored, I’m confident that international concerns will be allayed accordingly,” Wong said.

While strongly condemning violent acts by some demonstrators, Commissioner of Police Lo Wai-chung said the police sincerely hope the public can express their opinions in a peaceful, orderly and lawful manner.

Saddened by the violent conflicts on Wednesday, the Law Society of Hong Kong reiterated that the bill should be debated in a calm, rational and constructive manner, with a view to finding a suitable solution for the benefit of Hong Kong as a whole.

In a statement issued on Thursday, the professional association for solicitors in Hong Kong stressed that the city is a civilized society with a diverse population, where engagement through rational debate has always been respected.

The Democratic Alliance for the Betterment and Progress of Hong Kong, the largest political party in LegCo, urged opponents not to deteriorate the already chaotic situation in the council, nor to jeopardize its constitutional duties to scrutinize bills.

Noting that many protesters were of the younger generation, the party stressed that young people today will be the pillars of the city tomorrow. It called on them to stop tearing apart society through extreme behavior, and try to seek constructive measures to remedy the chaos.

In Beijing, the Ministry of Foreign Affairs on Thursday stressed that it was unnecessary for some people to worry that amendments to Hong Kong’s extradition law will affect the international community’s confidence in the SAR.

Geng Shuang, spokesman of the ministry, noted that Hong Kong has been a stable and prosperous economy since its return to the motherland, while the “one country, two systems” principle and a high degree of autonomy have been successfully implemented.