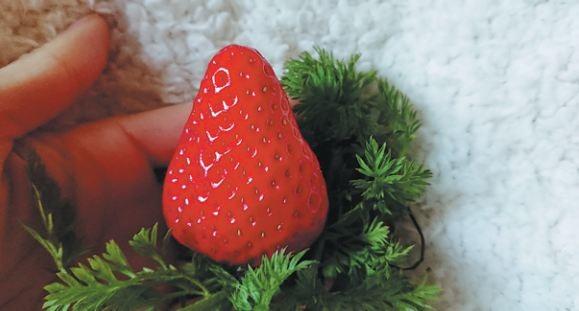 In this undated photo, Wang Xin uses all natural, organic methods to grow strawberries that are fragrant, temptingly red and sweet. (PHOTO /XINHUA)

BEIJING－Wang Xin is 33 years old. He is a landscape designer by profession and farmer in practice. The strawberries growing in his organic plantation on the southern outskirts of Beijing are believed among his clients to be "the best in China".

Every day in the megacity of Beijing, when people his age are rushing among jammed commuter traffic, endless meetings and Power-Point slides like hamsters on a wheel, Wang lives a life in the countryside, far away from the urban crowd.

He rises with the sun, works all day in the field or goes to the farmers' market to sell his fresh produce from the land that he has been working on, and by the end of the day, goes to bed as the night falls, with sore muscles and a heart that's content.

"I have hardly given it thought," he said when asked by a Xinhua News Agency reporter whether it was hard work. "It has become a lifestyle. This is the life I choose to live."

Like Wang, in this country where people see food as a heavenly essence, many urbanites, mostly with a higher educational background and white-collar work experience, have chosen to return to the countryside, to dedicate their mind and strength to the pursuit of the freshest flavors and healthier nature.

Every Tuesday, Saturday and Sunday, Wang Xin brings strawberries freshly picked the night before to Beijing's organic farmers' market. These fruits have grown naturally in nutrient-rich soil, without any use of fertilizers, pesticides, growth hormones or chemicals of any sort. 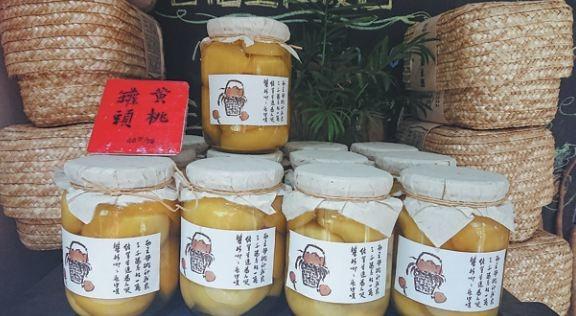 Organic peaches are a favorite dessert among many local organic foodies. (PHOTO / XINHUA)

"I don't plan to be filthy rich, or I wouldn't have gone for organic farming," Wang said, laughing. He is a man of medium build, athletic, with a healthy tan. It is hard to relate him to a designer who used to spend days and nights in front of a computer screen.

Having majored in landscape botany, Wang has always been a plant lover. At the age of 25, when he realized that he had been developing an office belly and his nine-to-five lifestyle had become a passionless routine, he quit his job, rented two plantation sheds in a suburb of the city, and rebooted his career as a farmer.

Last week, Wang was able to present this winter's first batch of ripe fruits that he planted in September. The work had begun in July, when he prepared a mix of all-natural organic matter to enrich the soil.

The formula has been perfected through years of research and experiments in collaboration with Beijing University of Agriculture, to simulate the formation of the fertile dark forest soil in Northeast China, known for its high crop productivity.

Logically, the true foundation of organic farming lies in the soil content. If the soil is good, the outcome is safe and tasty without the need for any fertilizing chemicals, Wang pointed out.

But quality produce is not the only objective. Wang hopes to build a production model that also rehabilitates the soil itself. In regular plantations, the soil usually would result in degradation within a matter of years after being overexploited.

Wang's transition to the farm has not always been a smooth ride. But after a rough start, which he considers a valuable lesson learnt, he has gone back to the university and visited his colleagues in Tochigi Prefecture, Japan－known as the homeland of the Tochiotome strawberry variety－to study the most avant-garde technologies in the organic farming world.

"I am certain that in three to four years, the soil that I have been reviving will keep getting healthier and healthier," he said.

Wang is not alone.

In Alshaa, a semiarid area of the Inner Mongolia autonomous region, Ma Yanwei, a postgraduate in ecology from Beijing Normal University, has spent years reinvigorating the salinized soil. (PHOTO PROVIDED TO CHINA DAILY)

In Alshaa, a semiarid region located in the northwestern Inner Mongolia autonomous region, Ma Yanwei, a master of science in ecology from Beijing Normal University, has spent years reinvigorating the salinized soils by applying water-saving methods to cultivate fruits and crops that are suitable for the local conditions.

Sweet melon, for example, has become a best-selling produce of his farm Zhiliangtian. The smallholding was named in tribute to Zhi Liangzhi, the name for Chinese philosopher Wang Yangming's (1472-1529) belief in the innate conscience being the guiding principle of people's actions and their understanding of the outside world.

Ma aims to find the ideal organic farming methodology to both maximize the utilization rate of the scarce local water resources and to revive the soil.

"As long as the soil improves, it is only natural to harvest healthy produce," Ma told a Xinhua reporter.

In the last five to six years, Ma has seen more and more young people returning to the countryside to take on farming. In 2017, he set up a network for these "new peasants" to communicate, exchange their experiences and help each other, "so we can avoid long detours and mistakes previously made by others," he said.

"If everyone does a good job, the land will only better recover," he said, when asked if his approach simply creates more competitors. 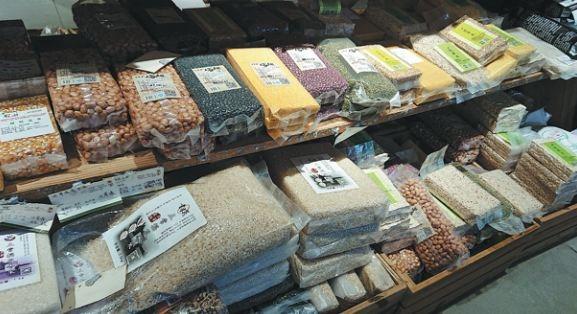 Beijing Farmers' Market has a permanent location for customers to come and shop. (PHOTO / XINHUA)

For 18 years, Zhang Zhimin, a former foreign trade expert with a State-owned group, has since been building an idyllic Eden in the far southwestern end of Beijing to produce foods and preserve biodiversity at the same time.

Fluent in English, French and Spanish, Zhang worked in food imports and exports around the time when China opened its market to the world outside. She said she believes that "agriculture is an art of humanity and nature working together."

At her bio-farm, nature rules over humanity's caprice. Instead of eliminating weeds and pests, the wholesome biosphere works by itself to produce seasonal harvests.

"Agriculture is the management of life, and life should be nourished by life itself," she said. It is the philosophy of her farm, called Heaven's Blessings, where trees, bushes and grass grow into inseparable woods, and insects, birds and cattle coexist in harmony. It's more like a habitat than a farm.

Nature by itself is resistant to a variety of threats that can harm crops, she explained. In the face of pests, pollution and climate change, biodiversity makes the most effective defense.

Wang Xin, Majored in landscape botany and used to be a designer, robooted his career as a farmer in suburban Beijing

For example, a certain type of weed can produce a substance that fends off pests that are potentially harmful to crops. Earthworms, a populous resident at the farm, help to digest and transform fallen leaves into organic matter that fertilizes the plants, as well as to loosen the soil.

"Humanity's only job is to observe, comprehend and follow nature's rules to manage our lives," Zhang said.

She explained that in early summer, she chops off the tender leaves and branches of the weed under the peach trees to feed the cattle, making room for the crops to thrive. In early autumn she lets the cows roam free to finish off the rest of the weeds.

Similar results have been observed in Wang's other vegetable shed, where its natural ecosystem has worked out perfectly for the harvest to be healthy while no intervention from the outside is necessary, he said.

"I have observed that the grass that grows among the crops functions as a regulating factor of the microclimate by keeping the soil humid," he said.

Then there are the whiteflies, hard to detect due to their miniscule size, they are usually controlled by insecticide. Here, the pest is kept in check by a native breed of spider that nests among the vegetables.

"Perhaps the wisdom based on thousands of years of working in harmony with nature could be the answer to the problems born in mass-scale modern agriculture," he suggested.

The market of trust

Over 200 small farmers and scholars attended a Farmers' Assembly held in China Agricultural University's College of Humanities and Development.

Participants came from all across the country, with the majority being highly educated with stable finances, who have returned to rural areas from city life, according to the organizers of the event－Beijing Organic Farmers' Market and Know Your Food, a self-publishing community focused on food sustainability.

Beijing Organic Farmers' Market is a local platform for individuals or small-sized collectives who adhere to the principle of organic, eco-friendly and sustainable farming, food processing and art crafting. 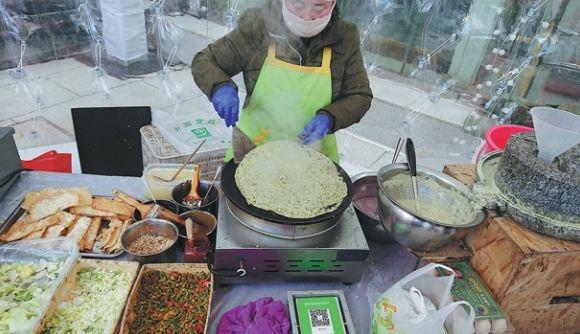 At the Farmers' Market, a jianbing, a popular street snack, is made with beans freshly ground into paste. (PHOTO / XINHUA)

Since its launch in September 2010, it has become a regular event in the capital city and has taken place on more than 500 occasions.

"The Farmers' Market hopes to consolidate the mutual confidence between the small-holder peasants and consumers by establishing a participation guarantee system," said Chang Tianle, founder of the platform and also founding editor of Know Your Food.

Through the system, the farmers, artisan bakers, jewelers and other craftspeople who wish to have a booth at the fair must respect and commit to the established criteria of organic production, under the inspection and approval of the market administrators and a committee of existing members, scholars and related NGOs.

For the small-holder peasants and artisans, the Participation Guarantee System works where a third-party certification would be too heavy a burden to afford, while the consumers can rest assured of the organic nature of the products they purchase at the fair, said Chang.

"Going grocery shopping at the farmers' market, cooking at home and eating well, is a lifestyle of growing popularity," she said.

"Organic or ecological farming is an important measure to improve the quality and safety of agricultural products," said Meng Fanqiao, professor at CAU's College of Resources and Environmental Sciences.

"Organic or ecological farming is of vital significance for economic development as well as environmental protection in rural areas, for which it should play an imperative role in China's rural revitalization and the building of an ecological civilization," he noted.

The green development of the countryside is a strategy that goes hand-in-hand with food supply security and income level improvement, said Jin Shuqin with the Ministry of Agriculture and Rural Affairs' Research Center for Rural Economy.

"Revivifying the ecosystem is a crucial aspect of overall rural revitalization," he said at the Peasants Assembly.

"It is our hope to promote healthy eating to become the mainstream choice, as well as the organic way to produce healthy foods," said Ma Xiaochao, project officer with Know Your Food.

"In the future, a healthy food-centered community will be built together by our small peasant friends, consumers, trade platforms, environmental NGOs and R & D institutes," she predicted.