US seeks to expedite aid for DPRK amid stalled nuclear talks 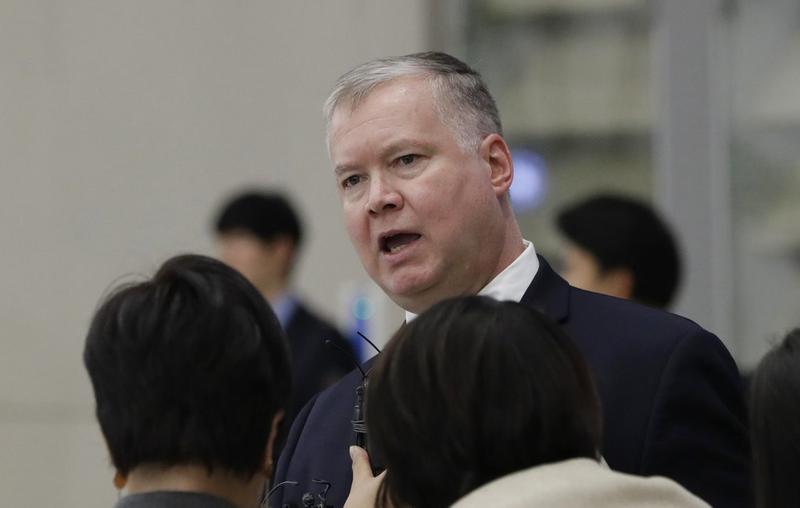 US Special Representative for the Democratic People's Republic of Korea Stephen Biegun speaks to the media upon his arrival at Incheon International Airport in Incheon, the Republic of Korea, Dec 19, 2018. (LEE JIN-MAN / AP)

SEOUL — US officials will try to expedite humanitarian aid to the Democratic People's Republic of Korea (DPRK), a US envoy said on Wednesday, as Washington and Pyongyang struggle to find a breakthrough in stalled talks aimed at ending the DPRK's nuclear program.

Stephen Biegun, the US special representative for DPRK, made the announcement as he arrived in Seoul for four days of talks with officials from the Republic of Korea (ROK).

International sanctions imposed over DPRK's nuclear weapons and missile programs technically do not cover humanitarian activities. But strict interpretations of UN sanctions have effectively shut down the DPRK operations of most relief groups, according to officials at UN agencies and civilian organizations

DPRK leader Kim Jong-un vowed to work towards denuclearization at his landmark summit with US President Donald Trump in Singapore in June, but the two sides have since made little progress.

With Washington doubling down on sanctions enforcement, humanitarian aid for the DPRK has nearly ground to a halt this year, despite warnings of a potential food crisis and improving relations with Pyongyang, aid groups say.

International sanctions imposed over DPRK's nuclear weapons and missile programs technically do not cover humanitarian activities, and over the summer the United Nations adopted a US proposal designed to streamline approval for aid shipments.

But strict interpretations of UN sanctions curtailing banking and shipping transactions with Pyongyang, as well as a travel ban for US citizens, have effectively shut down the DPRK operations of most relief groups, according to a dozen officials at UN agencies and civilian organizations.

"I'll be sitting down with American aid groups early in the new year to discuss how we can better ensure the delivery of appropriate assistance, particularly through the course of the coming winter," Biegun told reporters in Seoul, noting that the United States would work with the United Nations in reviewing how it grants sanctions exemptions for aid.

He acknowledged that the travel ban — which requires American aid workers to obtain special permission from the US State Department before traveling to the DPRK — "may have impacted the delivery of humanitarian assistance".

Early next year, US officials will review how they grant that permission for the "purposes of facilitating the delivery of aid", Biegun said.

Part of the catalyst for the review was the expulsion of an American citizen who had illegally entered the DPRK in October, he said.

The DPRK handled the man's case "expeditiously and with great discretion", giving American officials "greater confidence about the safety and security of Americans travelling" to the DPRK, Biegun said.

Biegun's visit to Seoul comes as negotiations between the United States and DPRK appear stalled, with the two sides yet to reschedule talks between US Secretary of State Mike Pompeo and senior DPRK official Kim Yong-chol after abruptly canceling a meeting in November.

Trump has said a second summit with Kim is likely to take place in January or February, though he wrote on Twitter last week that he is "in no hurry".

The DPRK has for years pursued nuclear and missile programs in defiance of UN Security Council resolutions, but the bellicose rhetoric from both Pyongyang and Trump that raised fears of war has eased this year.

The stalled negotiations have also had an impact on inter-Korean ties, with the DPRK aloof towards ROK's plan to host Kim Jong-un in Seoul this month as agreed at his summit with President Moon Jae-in in Pyongyang in September.

READ MORE: ROK yet to decide on date for DPRK leader's visit to Seoul

I think it is fair to say that the denuclearization process is not yet on track in earnest. Next year, we can see whether they will have a chance to get closer to the objectives

ROK Unification Minister Cho Myoung-gyon, who is due to meet Biegun on Friday, said the nuclear talks would face a critical moment between February and March.

"I think it is fair to say that the denuclearization process is not yet on track in earnest," Cho was quoted by the Yonhap news agency as telling reporters.

"Next year, we can see whether they will have a chance to get closer to the objectives."

DPRK state media has credited Trump for his "willingness" to continue dialogue, but has also slammed Washington for stepping up sanctions, accusing the State Department of being "bent on bringing the DPRK-US relations back to the status of last year which was marked by exchanges of fire".

The State Department said communication between both sides was "ongoing," but sanctions relief would come after they achieved the goal of a "final, fully verified denuclearization".

"The sooner North Korea denuclearizes, the sooner sanctions can be lifted," deputy spokesman Robert Palladino told a news briefing on Tuesday in Washington.

Biegun was scheduled to hold talks on Thursday with his ROK counterpart, Lee Do-hoon, ahead of their session on Friday of a working group launched last month to boost coordination on DPRK policy.

Biegun is expected to discuss inter-Korean issues with Cho amid US concerns that Seoul may be moving too quickly with Pyongyang relative to the lackluster progress on denuclearisation.

The two Koreas plan to hold a groundbreaking ceremony on Wednesday for their project to reconnect rail and road links, which would need US sanctions exemptions.