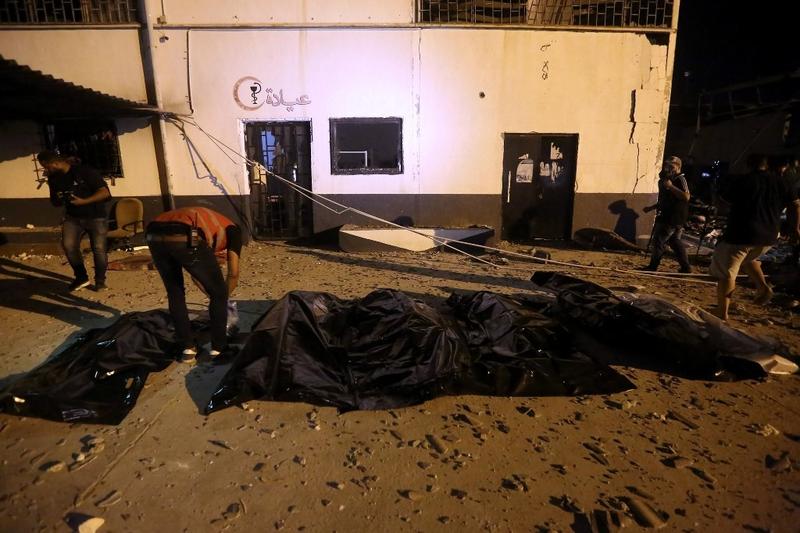 BENGHAZI — An airstrike hit a detention center for migrants in the Libyan capital early Wednesday, killing at least 44 people and wounding more than 130, the UN mission to the war-torn country said.

The airstrike raises further concerns about the European Union's policy of partnering with Libyan militias to prevent migrants from crossing the Mediterranean, which often leaves them at the mercy of brutal traffickers or stranded in squalid detention centers  near the front lines.

It could also lead to greater Western pressure on Khalifa Hifter, a Libyan general whose forces launched an offensive on Tripoli in April. The Tripoli-based government blamed his self-styled Libyan National Army for the airstrike and called for the UN support mission in Libya to establish a fact-finding committee to investigate.

A spokesman for Hifter's forces did not immediately answer phone calls and messages seeking comment. Local media reported the LNA had launched airstrikes against a militia camp near the detention center.

The airstrike targeted the detention center in Tripoli's Tajoura neighborhood. Health Ministry spokesman Malek Merset posted photos of migrants being taken in ambulances to hospitals. Footage circulating online and said to be from inside the migrant detention center showed blood and body parts mixed with rubble and migrants' belongings. 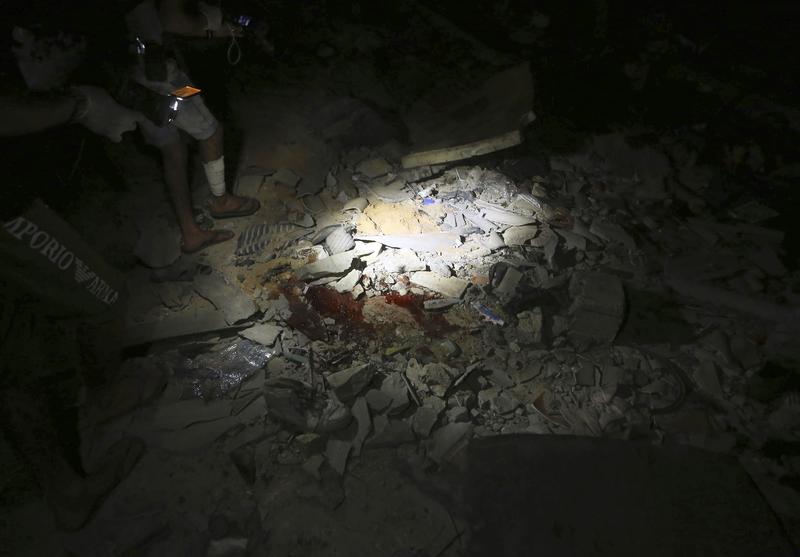 This photo shows a scene of an airstrike at a detention center in Tajoura, east of Tripoli Wednesday, July 3, 2019. (HAZEM AHMED / AP)

The airstrike hit a workshop housing weapons and vehicles and an adjacent hangar where around 150 migrants were being held, mostly Sudanese and Moroccans, according to two migrants who spoke to The Associated Press on condition of anonymity for fear of reprisal.

The migrants said three or four survived unharmed and about 20 were wounded. They said the remainder were killed, indicating the final death toll could be much higher.

The UN refugee agency in Libya condemned the airstrike on the detention center, which houses a total of 616 migrants and refugees, and called for an immediate end to efforts to return migrants to Libya.

UNHCR spokesman Charlie Yaxley noted that the agency had warned less than two months ago that anyone inside the Tajoura detention center was at risk of being caught in the fighting around Tripoli. Then, an airstrike that hit nearby wounded two migrants. Yaxley said UNHCR is sending medical teams to the site after the latest airstrike.

The head of the African Union, Moussa Faki Mahamat, also condemned the strike. He called for an independent investigation and said those responsible for the "horrific crime" should be held to account.

The LNA launched an offensive against the weak Tripoli-based government in April. Hifter's forces control much of Libya's east and south but were dealt a significant blow last week when militias allied with the Tripoli government reclaimed the strategic town of Gharyan, about 100 kilometers from the capital. Gharyan had been a key LNA supply route.

Many camps for militias loosely allied with the UN-supported government are in Tajoura, east of the city center, and Hifter's forces have targeted such camps with airstrikes in recent weeks. The LNA said Monday it had begun an air campaign on rival forces in Tripoli after it lost control of Gharyan.

His forces include the remnants of Gadhafi's army as well as tribal fighters and ultra-conservative Islamists known as Salafists. They appear more like a regular army than their adversaries, with uniforms and a clear chain of command.

Hifter's forces boast MiG fighter jets supplied by neighboring Egypt, as well as drones, attack helicopters and mine-resistant vehicles. It was not immediately clear what munitions were used in the airstrike early Wednesday.

Oded Berkowitz, a security analyst focused on the Libyan conflict, said Hifter's LNA flies "a handful of obsolete aircraft" that are "in poor condition." He said it has received spare parts from Egypt and possibly Russia, as well as decommissioned aircraft from both countries.

"Egypt and the UAE have been conducting air operations on behalf of the LNA, but there are no indications that the UAE transferred aircraft to the LNA," he said. 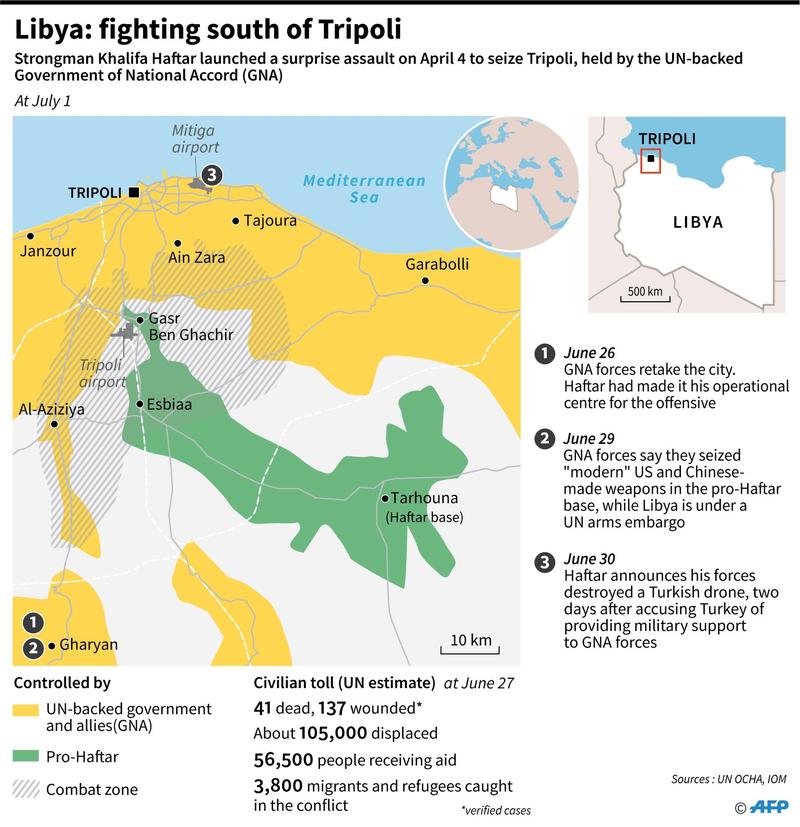 The fighting for Tripoli has threatened to plunge Libya into another bout of violence on the scale of the 2011 conflict that ousted longtime dictator Moammar Gadhafi and led to his death.

Hifter says he is determined to restore stability to the North African country. He is backed by Egypt, the United Arab Emirates and Saudi Arabia while his rivals, mainly Islamists, are supported by Turkey and Qatar.

His campaign against Islamic militants across Libya since 2014 won him growing international support from world leaders who say they are concerned that Libya has turned into a haven for armed groups and a major conduit for migrants bound for Europe.

His opponents, however, view him as an aspiring autocrat and fear a return to one-man rule.

At least 6,000 migrants from Eritrea, Ethiopia, Somalia, Sudan and other nations are locked in dozens of detention facilities in Libya that are run by militias accused of torture and other abuses. Most of the migrants were apprehended by European Union-funded and -trained Libyan coast guards while trying to cross the Mediterranean Sea into Europe.

The detention centers have limited food and other supplies for the migrants, who made often-arduous journeys at the mercy of abusive traffickers who hold them for ransom money from families back home.

The UN refugee agency has said that more than 3,000 migrants are in danger because they are held in detention centers close to the front lines between Hifter's forces and the militias allied with the Tripoli government.

Libya became a major crossing point for migrants to Europe after the 2011 ouster and killing of Gadhafi, when the North African nation was thrown into chaos, armed militias proliferated and central authority fell apart.