Vast reclamation projects will provide 1,700 hectares of land and 340,000 jobs over next 20-30 years, CE says in her Policy Address 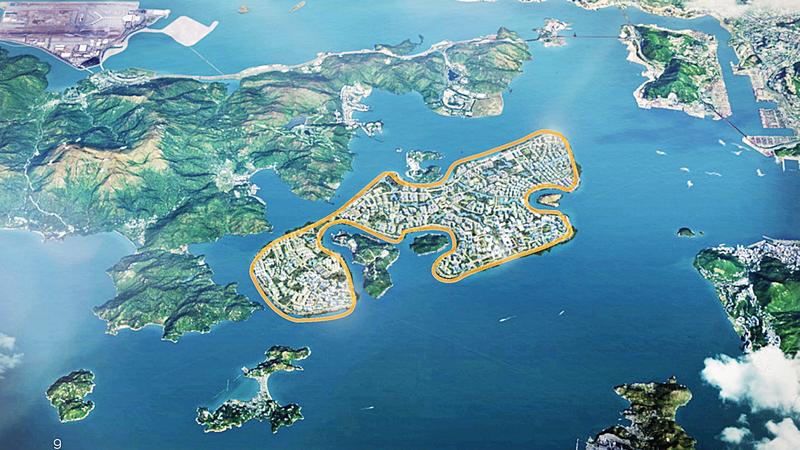 In an attempt to ease Hong Kong’s chronic overcrowding, an ambitious reclamation project near Lantau Island that will create a total land area of 1,700 hectares is the cornerstone of Chief Executive Carrie Lam Cheng Yuet-ngor’s second Policy Address, which she presented on Wednesday (The map is not the official plan of land reclamation near Lantau). (PHOTO PROVIDED TO CHINA DAILY)

An ambitious land reclamation planned to be built near Lantau Island will go a long way in addressing the city’s acute land shortage problem, as well as in spurring social and economic development.

Artificial islands, covering a total area of 1,700 hectares, would be created in the waters surrounding Lantau, near Kau Yi Chau and Hei Ling Chau and off the coast of Tuen Mun. They would provide between 260,000 and 400,000 residential units — 70 percent being public housing — capable of accommodating up to 1.1 million people and creating 340,000 jobs over the next two to three decades.

Improving livelihoods and developing the economy and our society’s transport infrastructure hinge on land resources, without which all strategies or plans will be empty talk

A dedicated coordination office, directly accountable to the chief executive, will coordinate and monitor the project’s planning and implementation.

“Finding land is the pressing problem that we need to tackle urgently,” said Lam. “Improving livelihoods and developing the economy and our society’s transport infrastructure hinge on land resources, without which all strategies or plans will be empty talk.”

Marcos Chan, head of research at CBRE Hong Kong, said that while the project will create Hong Kong’s third central business district for future economic development with improved connectivity with Central and Kowloon East, the shortage in office supply will not ease any time soon.

“The policy is on the right track in tackling the issue. However, the government should rethink its immigration and population planning policies,” said Joseph Tsang, managing director at Jones Lang LaSalle.

“The government must have thorough and long-term planning for the transportation and infrastructure of the reclaimed land or newly created artificial islands to prevent congestion on the enlarged Lantau Island,” said Cushman & Wakefield, a real estate service company.

Besides the land reclamation program, the government will adopt three other measures to tackle the thorny issue of bolstering land supply.

It will speed up studies on brownfield sites in the New Territories and make necessary arrangements to reprovision existing operations to facilitate housing development.

The Development Bureau will coordinate with relevant departments in developing brownfield sites in New Territories North, and initiating a study of 760 hectares of scattered brownfield sites to identify those with greater development potential.

A Land Sharing Pilot Scheme will be launched to allow private land not covered by the government’s planned development to be utilized to provide public and private housing in the short-to-medium term.

“No less than 60 to 70 percent of the increase in floor areas shared between the government and private developers must be used for public housing development,” Lam said.

According to market estimates, there are more than 1,000 hectares of undeveloped agricultural land owned by developers in the New Territories. They are three times the size of the Kai Tak Development Area and could yield 640,000 housing units of 500 square feet on a plot ratio of three.

In the past five years, only seven rezoning applications had been approved by the Town Planning Board, covering an area of about 18 hectares with an estimated supply of some 2,800 housing units, according to government data.