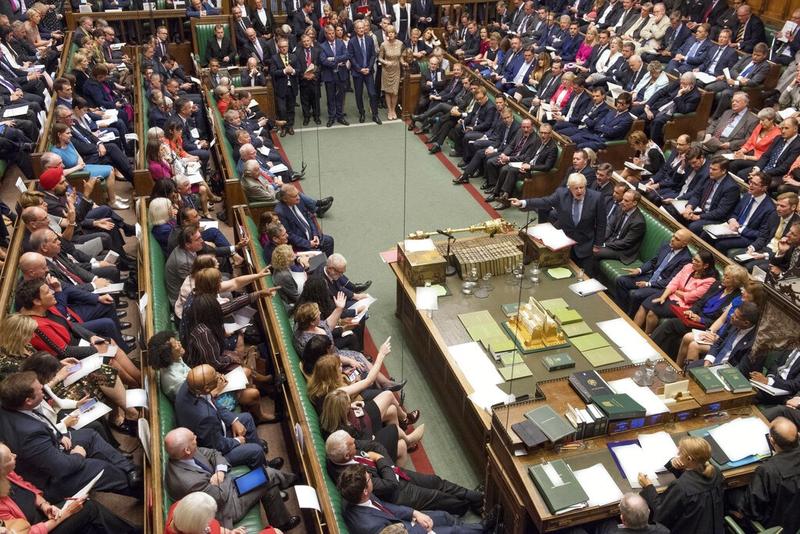 LONDON — Prime Minister Boris Johnson called Wednesday for a national election on Oct 15, saying it was the only way out of Britain's Brexit impasse after lawmakers moved to block his plan to leave the European Union next month without a divorce deal.

But Parliament delivered Johnson his third defeat in two days and turned down a motion triggering a vote. Johnson indicated he would try again, saying an election was the only way forward for the country, and accusing opposition Labour Party leader Jeremy Corbyn of being afraid of the public's judgment.

Boris Johnson needed the support of two-thirds of the 650 lawmakers in the House of Commons to trigger an election — a total of 434 — but got just 298, with 56 voting no and the rest abstaining

"The obvious conclusion, I'm afraid, is that he does not think he will win," Johnson said.

Scarcely six weeks after taking office with a vow to break Britain's Brexit deadlock — which entrapped and finally defeated his predecessor, Theresa May — Johnson's own plans to lead the UK out of the EU are in crisis.

Johnson insists Britain must leave the bloc on the scheduled date of Oct 31, with or without a divorce deal, but many lawmakers — including several from Johnson's Conservative Party — are determined to thwart him. On Wednesday the House of Commons approved an opposition bill designed to halt a no-deal Brexit.

Johnson accused the opposition of trying to "overturn the biggest democratic vote in our history," referring to the outcome of the 2016 referendum to leave the EU.

His solution, a risky one, is an election that could shake up Parliament and produce a less obstructive crop of lawmakers. But opinion polls do not point to a certain majority for Johnson's Conservatives, and on Wednesday Johnson did not get the general election he craves — at least not yet. Opposition parties, deeply mistrustful of the prime minister, refused to back a new election until the anti-no deal bill becomes law.

"Let the bill pass and have Royal Assent and then we can have a general election," Corbyn said.

Johnson needed the support of two-thirds of the 650 lawmakers in the House of Commons to trigger an election — a total of 434 — but got just 298, with 56 voting no and the rest abstaining. 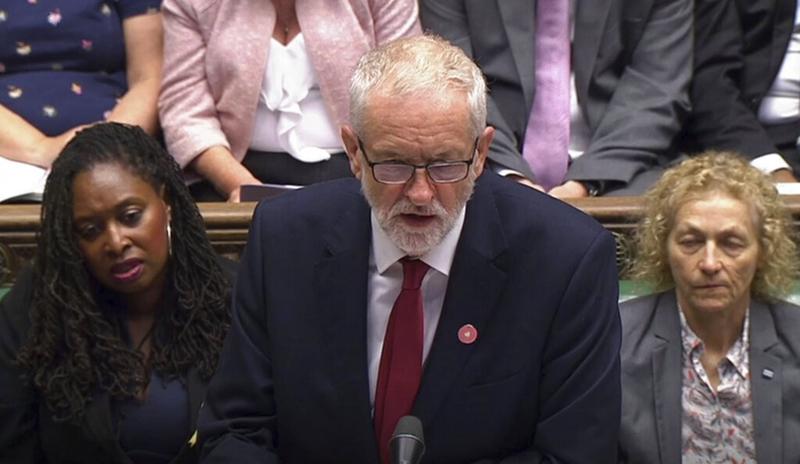 Johnson signaled that he would try again to trigger a snap election, urging opposition lawmakers to "reflect overnight and in the course of the next few days."

The maneuvers are part of a head-on showdown between Johnson's Brexit-at-all-costs administration and a Parliament worried about the economic and social damage that could be wrought by a messy divorce.

Opposition lawmakers, supported by rebels in Johnson's Conservative Party, warn that crashing out of the bloc without a divorce agreement would cause irreparable economic harm.

In a second straight day of parliamentary turmoil, the House of Commons voted by 327-299 in favor of an opposition bill to block a no-deal Brexit, sending it to Parliament's upper chamber, the House of Lords. Even so, the bill's fate is unsure. With Johnson set to suspend Parliament for several weeks starting next week, pro-Brexit peers in the Lords are threatening to try to stop it by filibustering until time runs out. 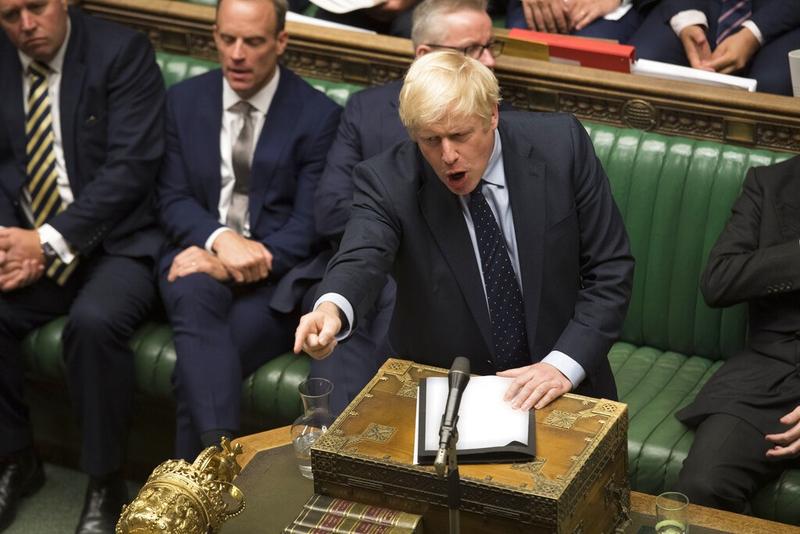 "There is very little time left," said Labour Party lawmaker Hilary Benn as he introduced the opposition bill. "The purpose of the bill is very simple: to ensure that the United Kingdom does not leave the European Union on the 31st of October without an agreement."

The bill would require the government to ask the EU to delay Brexit until Jan 31, 2020, if it can't secure a deal with the bloc by late October.

The lawmakers hope to pass the bill into law — a process that can take months — by the end of the week, because Johnson plans to suspend Parliament at some point next week until Oct 14.

Johnson insisted Wednesday that talks with the EU on a revised deal were "making substantial progress."

But the bloc says the UK has not submitted any substantial new proposals. European Commission spokeswoman Mina Andreeva said "there is nothing new" from London.

Johnson, who was a leader of the 2016 campaign to leave the EU, has long said that his enthusiasm and energy for Brexit will allow him to succeed in leaving the EU where May had failed, leading to her resignation.

But events have spiraled out of his control. He leads a government with no majority in Parliament and may not be able to secure an election that could change that fact.

He was humiliated Tuesday — the first day of Parliament's autumn term — by losing his first Commons vote as prime minister when lawmakers passed a motion 328-301 that enabled their push for a law stopping a no-deal Brexit. His government lost its working majority as one Conservative lawmaker defected to the opposition, and more than 20 Tory legislators sided with the opposition on the vote. 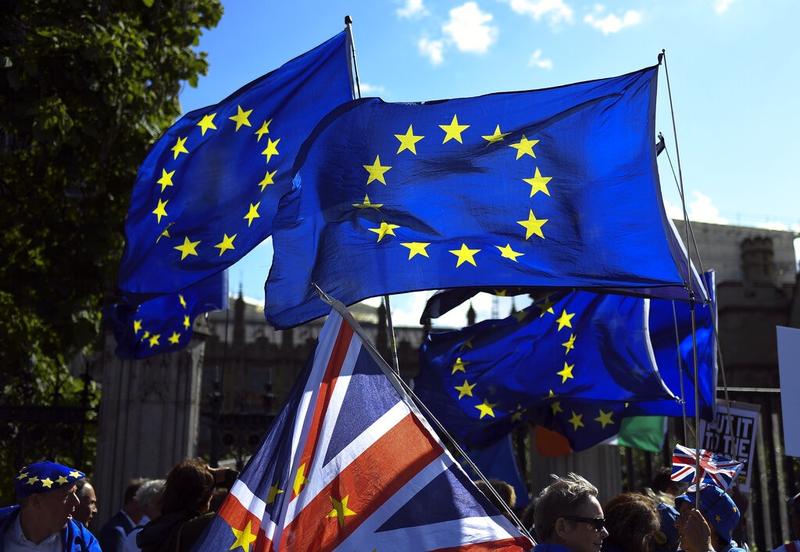 Anti-Brexit demonstrators waving EU and Union flags during a protest outside the Houses of Parliament, in London, Sept 4, 2019. (ALBERTO PEZZALI / AP)

"Not a good start, Boris!" one unidentified lawmaker shouted after the vote.

Johnson responded with swift vengeance, expelling the rebels from the Conservatives in Parliament, leaving them as independent lawmakers.

The beleaguered UK leader got a boost Wednesday when a Scottish court refused to intervene in his decision to suspend Parliament, ruling it was a matter for lawmakers to decide, not the courts.

The case was only the first of several challenges to Johnson's maneuver, however.

Transparency campaigner Gina Miller, who won a ruling in the Supreme Court in 2017 that stopped the government from triggering the countdown to Brexit without a vote in Parliament, has another legal challenge in the works — set to be heard Thursday. A human rights campaigner has sued in Northern Ireland, arguing that the historic Good Friday peace accord is in jeopardy because of Johnson's actions.