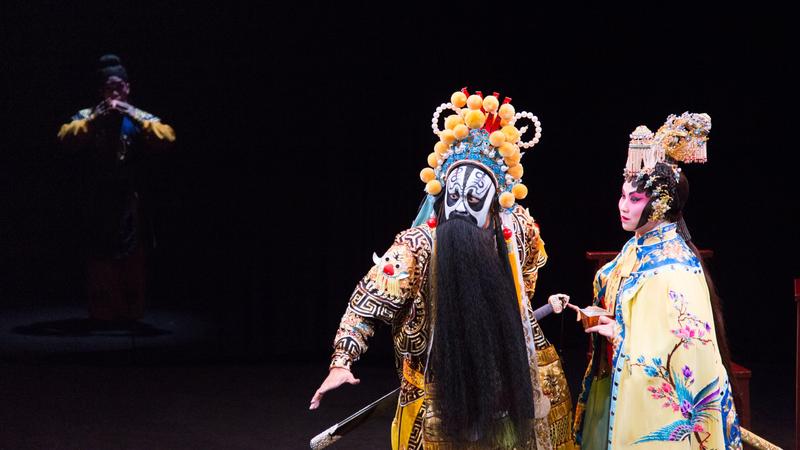 A scene from the Xiqu Centre-hosted Farewell My Concubine (New Adaptation), which borrows elements from Western theater, creating an immersive atmosphere. (PHOTO PROVIDED TO CHINA DAILY)

Lee King-chi was 10 years old when her music teacher introduced her to a song from The Flower Princess. That was her first-ever encounter with Cantonese Opera. “I started to sing along,” Lee recalls. She continued to sing the song even after she got home from school, repeating it so often that her mother eventually decided to sign her up for Cantonese Opera classes.

Now in her early 30s, Lee is part of The Gong Strikes One, a performance duo she co-founded with fellow Hong Kong Academy of Performing Arts alumnus Chan Chi-kong. The pair specializes in Chinese opera and, since coming together in 2015, has challenged the ways in which the art form is perceived by the public. In 2017, for example, they produced I, Wu Song, a one-man show that was notable for its deliberate absence of speech and singing. Instead, the focus was on the music, especially in terms of its percussive patterns.

“The idea was to change people’s focus when they’re watching a (Cantonese Opera) show. The storyline is what people usually care about, so I took that away. I took all the other characters away, just leaving the protagonist,” says Lee. “It’s like putting the spotlight on something you don’t usually pay attention to.”

I, Wu Song attracted the attention of some audiences who previously knew or cared little for Cantonese Opera. While other troupes have struggled to expand beyond the art form’s established audience, Lee and Chan have found success thanks to their interdisciplinary approach. The Gong Strikes One often performs at venues not commonly associated with Cantonese Opera — including contemporary art festivals and Freespace Happening events at the West Kowloon Art Park. They also work frequently with guest performers and have started experimenting with electronics and video technology to create new performance experiences.

“We are not only taking audiences to something new but also trying to take (Cantonese Opera) practitioners to a new art world,” says Lee. “We are trying to help them open up.” 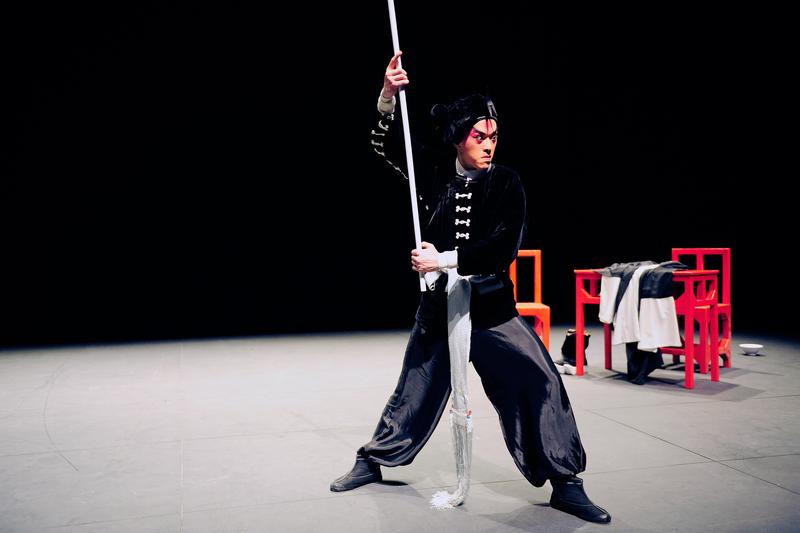 I, Wu Song, produced by The Gong Strikes One,  did away with dialogue and singing, focusing instead on the music, including distinctive percussive patterns. (PHOTO PROVIDED TO CHINA DAILY)

The Gong Strikes One is not alone in pushing the boundaries of Chinese  theater in Hong Kong. For years, Hong Kong Arts Festival (HKAF) has included experimental adaptations of Chinese opera productions in its programs. In 2018, the festival commissioned a new adaptation of Pavilion of a Hundred Flowers, a tale of rebellion and romance originally conceived by Tong Tik-sang in 1958. The production was reimagined to include elements from contemporary theater and staged as part of the Jockey Club Local Creative Talent Series — a platform that provides resources and support for local artists from all backgrounds to collaborate and create new artistic visions. The production was restaged at last year’s HKAF. At the upcoming edition of the festival in February and March 2020, the Jockey Club Local Creative Talent Series will produce Journey to the West Rewind, which reassesses the classic tale of Tang Sanzang’s path to enlightenment while tweaking the conventions of staging Cantonese Opera.

For Naomi Chung, Head of Xiqu, Performing Arts, West Kowloon Cultural District Authority (WKCDA), nurturing local talents is essential for Cantonese Opera to flourish. Even before opening its doors in January, WKCDA’s Xiqu Centre led the charge in shining the spotlight on young and emerging homegrown talents. For example, Farewell My Concubine (New Adaptation) — an experimental take on the classic tale about the fall of Chinese general Xiang Yu — stars three Hong Kong performers, all under the age of 40. Many other members of the crew are also young talents recruited locally, and everyone is encouraged to share their input and be involved in the creative process.

So far, the production has proven to be one of Xiqu Centre’s most popular shows. While traditional Cantonese Opera shows focus mainly on the actors and the lyrical narrative, this production draws inspiration from other artistic circles in an effort to create a richer overall experience. “For everything we add, we ask ourselves whether or not it helps to raise the artistic level of the show,” says Chung. Taking a cue from western theater, the show incorporates more elements of staging, lighting and sound, resulting in an emotionally nuanced and immersive atmosphere not typically found in more traditional Chinese opera performances.

Since its premiere in Shanghai in 2016, the show has been met with widespread critical acclaim. According to Chung, this success can be attributed not only to the show’s pool of local talent and multifaceted creative approach, but also to the frequency of its performance. To date, the opera has been staged 27 times in cities across the region.

“For a new production to come alive and become a classic of the future, you need to let it be performed constantly. Our belief is that good productions must go on in performance,” says Chung, who adds that no two shows are the same. “We are constantly improving. Every time we perform, we tweak and improve. If you watched the show in 2016 in Shanghai and you watched it again today, you would think it was very different.”

Indeed, compared to the production’s very first incarnation, which was already briskly paced for a Cantonese Opera, its latest staging in Hong Kong this past October was reworked to make it even more dramatic and punchy with a runtime of just 70 minutes, much shorter than traditional Chinese opera performances, which often run to three hours or more.

Chung admits that there are still difficulties in reaching new audiences. “Our mission and vision is to give this historical art form a platform for contemporary development without losing its traditional flavor,” says Chung. While the new adaptation of Farewell My Concubine has been a promising start, there is uncertainty over whether future productions will be as well received. “We are taking it one step at a time,” she says.

In sync with the times

Professor Leung Bo-wah, head of the Department of Cultural and Creative Arts at The Education University of Hong Kong, says that lack of audience awareness is a key issue. “We have enough venues and there’s an emergence of a new generation of trained actors. But audiences have not increased. This is the problem,” he says.

According to Leung’s research, primary school students show the most interest and confidence in learning about Chinese opera. By the time children reach middle school, they display a greater reluctance to associate with the art, often seen as being old-fashioned.

“This is a self-identity or musical-identity issue. People believe the music they like represents their identity and become worried about how others perceive them. It becomes a more complicated issue that’s not just about the music, but about identity, including cultural identity,” he explains.

Lee feels the flexibility of the Chinese opera form is a distinct advantage. “One only needs to look at the long history of the art form to see that it remains relevant today due to its ability to innovate and adapt,” she says. “We don’t have to sell Cantonese Opera as a traditional art form. If we keep labeling it as something old-fashioned, it just won’t work.”

Almost as if to answer her concerns, Leung’s team at the Research Centre for Transmission of Cantonese Opera has developed a virtual reality video that allows students to experience a Cantonese Opera performance up close as well as an interactive kinetic assessment system that helps one pick up Chinese opera movements in real-time.

Although the latter program is a technological breakthrough in the field of Chinese opera, only a handful of schools have agreed to test it out.

Leung says such indifference is especially disappointing as it suggests an apathy toward Chinese and specifically Hong Kong culture. “I hope every principal, teacher and parent would value this culture, and I wish more young people knew how to watch and appreciate Cantonese Opera,” he says.