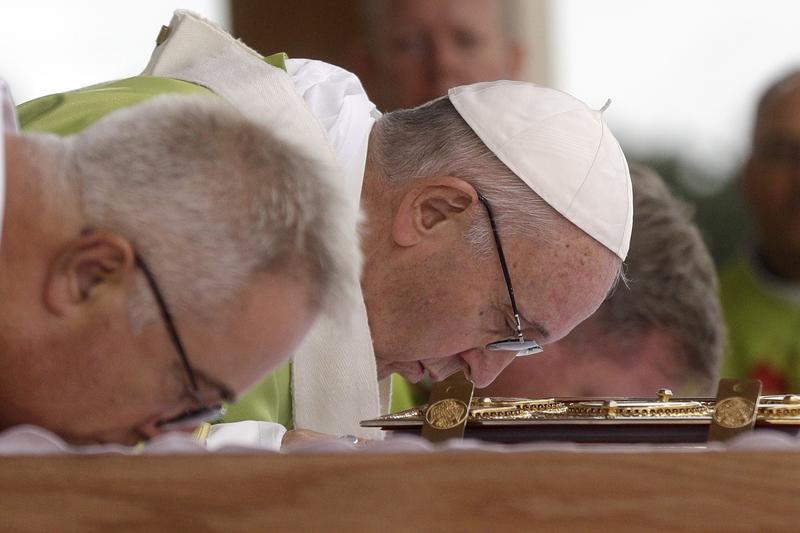 DUBLIN — Pope Francis issued a sweeping apology Sunday for the "crimes" of the Catholic Church in Ireland, saying church officials didn't respond with compassion, truth or justice to the many children and women who were abused over generations.

Francis was interrupted by applause from the crowd of 300,000 as he read the apology out loud at the start of Mass in Dublin's Phoenix Park, the largest gathering of his two-day trip. It was a response to the tens of thousands of Irish children sexually and physically abused at Catholic Churches, schools and workhouses, and the women who were forced to live and work in laundries and give up their children if they got pregnant out of wedlock.

"We ask forgiveness for those members of the hierarchy who didn't take responsibility for this painful situation, and who kept silence," Francis said. "May the Lord keep this state of shame and compunction and give us strength so this never happens again, and that there is justice."

With his weekend visit to Ireland, Francis became the first pope to visit the predominantly Catholic country in 39 years, and the first since the truth of Ireland's Catholic abuses began to come to light in the 1990s. He told the hundreds of thousands of people who turned out for Mass that he met Saturday with victims of all sorts of abuses: sexual, labor and religious.

Responding to a plea from the children forcibly put up for adoption, the pope assured their aging mothers that it wasn't a sin to look for the children taken from them so long ago. For decades, church officials told the women just the opposite. 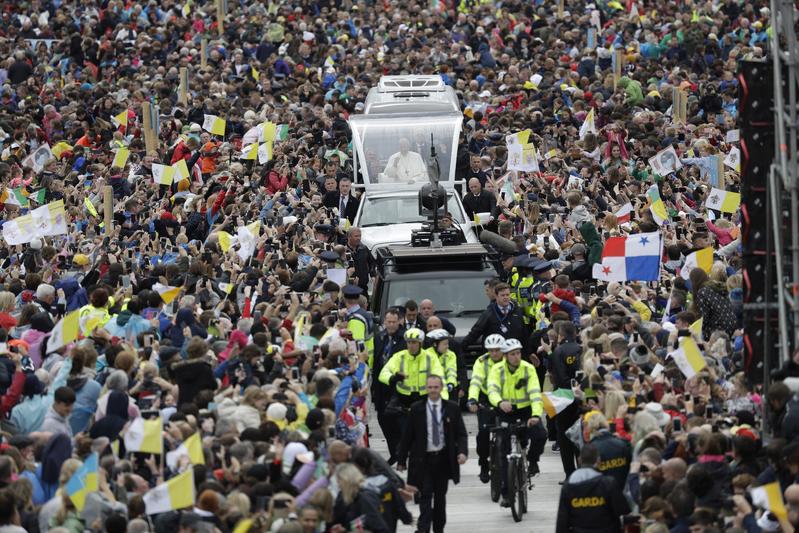 "It was painful, painful for me" to learn of this betrayal by the church, Francis told reporters afterward. He said he felt "consolation of having helped clarify these things."

One forced adoptee who met with the pope, Clodagh Malone, said Francis was "shocked" at what the group told him and "he listened to each and every one of us with respect and compassion."

Survivors said the Argentine pope understood well their plight, given Argentina's own history of forced adoptions of children born to purported leftists during its 1970s military dictatorship.

"That is a big step forward for a lot of elderly women, particularly in the countryside in Ireland, who have lived 30, 40, 50, 60 years in fear," another adoptee, Paul Redmond, told The Associated Press. "That would mean a lot to them."

Hundreds of kilometers away, a few hundred somber protesters marched through the Irish town of Tuam and recited the names of a 796 babies and young children who died at a Catholic-run orphanage there, most during the 1950s. The children were buried in a mass grave in a septic area of the grounds. 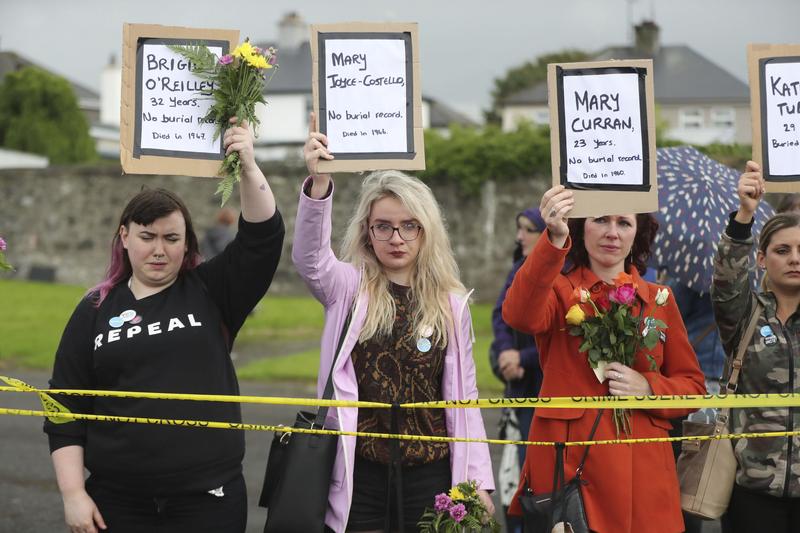 People hold up names of children as they gather to protest at the site of the former Tuam home for unmarried mothers in County Galway, during the visit to Ireland by Pope Francis, Aug 26, 2018. (Niall Carson / AP)

March organizer Annette McKay, who said her mother gave birth in 1942 to a daughter who died of measles and whooping cough at the age of 6 months, said the reading of the 796 names was meant to be "a silent rebuke." 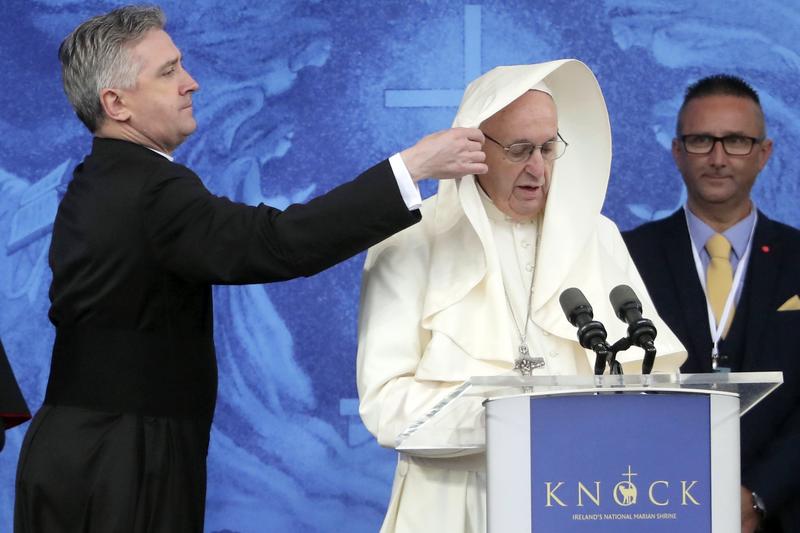 An aide adjusts Pope Francis' cape as he delivers his speech at the Knock Shrine, in Knock, Ireland, Aug 26, 2018. (Niall Carson / AP)

An amateur Irish historian, Catherine Corless, led to the discovery of the grave after she tracked down death certificates for nearly 800 children who had died as residents of the facility, but could find a burial record for only one child.

Irish government-appointed investigators reported last year that DNA analysis of selected remains confirmed the ages of the dead ranged from 35 weeks to 3 years old and were buried chiefly in the 1950s. 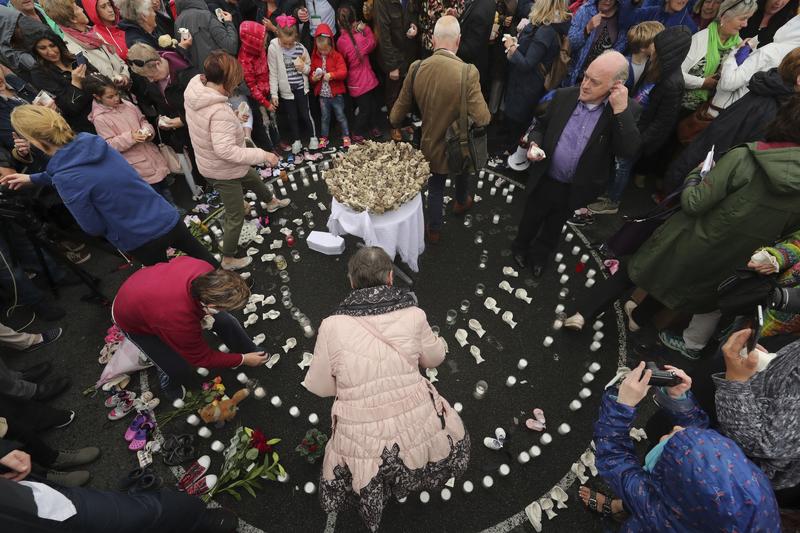 People gather clay baby shoes at the end of the protest at the site of the former Tuam home for unmarried mothers in County Galway, during the visit to Ireland by Pope Francis, Aug 26, 2018. (NIALL CARSON / AP)

Corless and Tuam survivors are seeking an apology from the pope, as well as a decision to exhume the children's remains to give them a proper church burial.

Francis was informed of the grave site on Saturday by an Irish government minister, who told him the church had a role in the scandal. Francis said he accepted the minister's lament as "constructive collaboration" and said he would read a memo she prepared for him on the investigation.

The abuse scandal has devastated the church's reputation in Ireland since the 1990s and exploded anew in the United States with reports of misconduct among the US hierarchy. 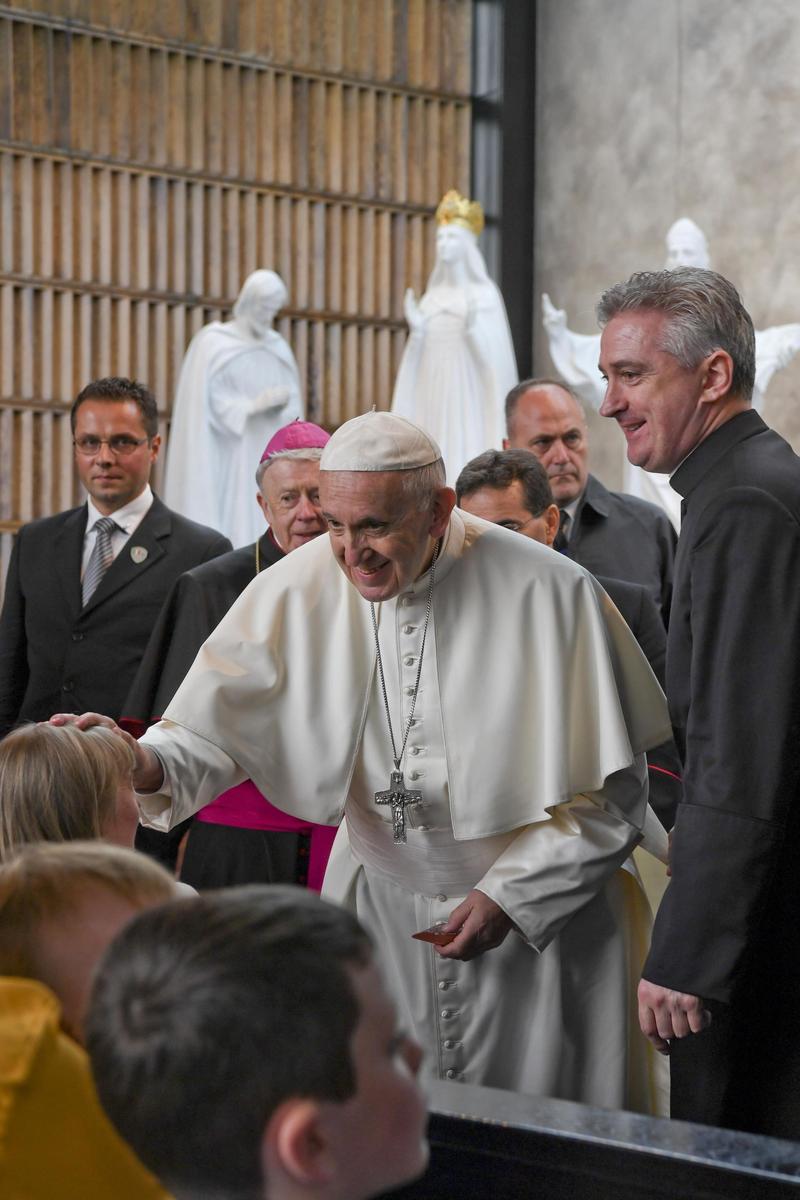 He accused Vatican officials of knowing about the sexual escapades of ex-Cardinal Theodore McCarrick since 2000, but making him a cardinal anyway. And he accused Francis of knowing since 2013, and of rehabilitating him despite sanctions that were imposed on him in 2009 or 2010.

Francis accepted McCarrick's resignation as cardinal last month after a US church investigation determined an accusation he molested a minor was "credible."

Francis declined late Sunday to confirm or deny Vigano's report, telling journalists to judge for themselves. "I will not say a word."