Italy's Salvini pushes for a new election over deadlocks 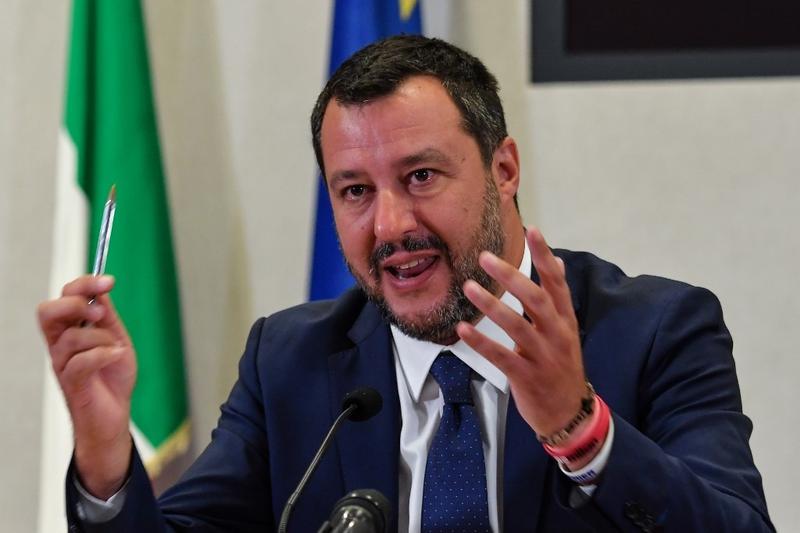 In this file photo taken on July 15, 2019, Italy's Interior Minister and deputy PM Matteo Salvini gives a press conference as part of a meeting with the workers' unions at the Viminale palace in Rome. (ANDREAS SOLARO / AFP)

MILAN — Italy faced a government crisis Thursday after Interior Minister Matteo Salvini of the right-wing League party called for a new election, saying his party's coalition with the populist 5-Star Movement had collapsed over policy differences.

Premier Giuseppe Conte said he would convene Parliament, as requested by Salvini to seek a confidence vote, but showed his anger over what he called Salvini's move to "abruptly interrupt the actions of the government." He urged Salvini to explain himself to voters.

The governing two parties have been at odds over a host of policy issues but tensions spiraled Wednesday after the Senate rejected a move by 5-Star to kill a EU-funded high-speed rail link with neighboring France. The big infrastructure project — known in Italy as TAV — is backed by the League and seeks to improve rail links across several European nations.

As tones hardened, Salvini met with Conte on Thursday. After the meeting, Salvini issued a statement saying the TAV vote clearly showed that the ruling coalition had collapsed and called for a speedy election.

"Let's go immediately to the Parliament and verify that there is no longer a majority, as was evident in the vote on the TAV, and quickly return the word to voters," Salvini said.

If the government should lose a confidence vote, that could set the stage for a new election.

In remarks to journalists late Thursday, Conte chastized Salvini for urging lawmakers to interrupt their vacations for a speedy confidence vote. "It is not for the interior minister to decide the timing of a political crisis in which other institutional actors are involved," the premier said.

Conte said he would be in touch with the speakers of both houses to work out when to convene Parliament.

"I already clarified with Salvini during our meetings that this crisis that he triggered will be the moist transparent crisis in the history of the republic," Conte said.

In the event of a vote of no-confidence, it would be up to Italy's president to call a new election if he found no way of salvaging the government. Both the League and the 5-Star Movement have said they don't want to see a government formed of non-political technocrats.

The timing of any election is critical, as Italy must submit a budget in the fall — and needs a working majority to work out terms. The EU's third-largest economy barely dodged an EU budget disciplinary process over its rising debt levels this year.

The 5-Star leader, Luigi Di Maio, responded to Salvini's statement by saying his populist party was ready to go to a new election. But while Salvini wants immediate vote, Di Maio sought to postpone it until after parliament gave its final approval to a reform reducing the number of lawmakers, a vote that had been scheduled for early September.

Earlier Thursday, the right-wing League issued a statement complaining of deadlock with the 5-Star Movement on a variety of issues, saying "it is useless to go on" adding that "the only alternative to this government" is for a new election.

The high-speed train vote laid bare the deep divisions in the Italy's 14-month-old government, with the 5-Stars opposing the rail link as costly and unnecessary and the League supporting it as necessary for the economy and its core base of northern entrepreneurs.

After the vote, Salvini told supporters in the coastal town of Sabaudia "that something broke in the last months" in the governing coalition.

Besides the high-speed rail-link, the League listed other areas of contention between the two parties, including fiscal policies, energy, justice reform, regional autonomy and relations with Europe.

In his comments Wednesday, Salvini noted that the 5-Star's pet electoral promise, basic income, which the government passed, was a handout that did not create jobs.

Salvini is coming off another victory this week with the passage of a new security law that fines humanitarian rescue ships up to 1 million euros (US$1.1 million) if they enter Italian waters with migrants. Preventing such ships from docking has been Salvini's hallmark as interior minister

After approving a basic minimum income and reversing an unpopular pension reform, the government bogged down during the European election campaign and never appeared to regain its footing.

Salvini's anti-migrant, anti-NGO stance is credited with the League's surge in popularity. After claiming just 17% of the vote in last year's national election, the league won 34% in European elections this spring. Surveys put support for the party now at 38%.

The 5-Star Movement's fortunes have sunk conversely, from nearly 33% of the vote in the national elections, giving it more seats in parliament than its partners, to just 17% in the European elections. Its support hovers at 17% currently.

READ MORE: Defiant Salvini says time may be running out on Italy govt

Conte, who celebrated his 55th birthday Thursday, appeared bitter that his government experience appeared to be coming to an end, and took some swipes at Salvini, noting that the League is under investigation for allegedly taking funding from Russia and commenting on the League leader's recent public appearances and press conferences on Italian beaches.

Most of all, he took issue with suggestions that the government was in a stalemate.

"I will not allow the narrative of a government that doesn't function. Of a government of 'No.' This government in reality has always spoken little, and worked a lot," Conte said. "This government wasn't at the beach every day, but in the institutional seats to work from morning to night with respect for Italians."