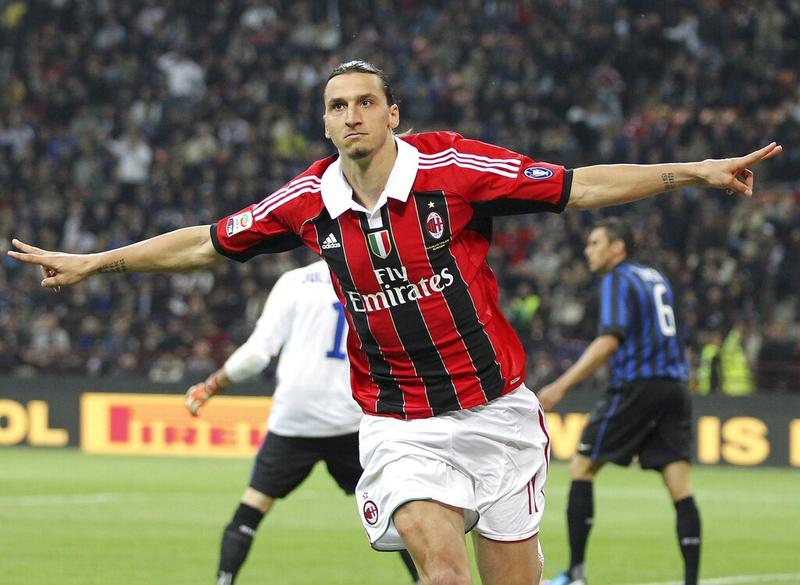 In this May 6, 2012 filer, AC Milan forward Zlatan Ibrahimovic, of Sweden, celebrates after scoring during the Serie A soccer match between Inter Milan and AC MIlan at the San Siro stadium in Milan, Italy. (PHOTO / AP)

Veteran striker Zlatan Ibrahimovic is returning to help his struggling former club AC Milan, which is reeling from a humiliating defeat and languishing way behind city rival Inter Milan.

Ibrahimovic's arrival resembles something of a rescue mission for a seven-time European champion fallen on tough times.

That's because Milan is mired in 11th place in Serie A, a distant 21 points behind league leader Inter, and none of its players has more than four league goals this season.

Matters reached a crushing low last Sunday, when Italy's most successful club in the European Cup endured its heaviest league defeat in 21 years, a 5-0 defeat at Atalanta on Sunday.

The club desperately needs Ibrahimovic at his best to stem the rot and have a chance at qualifying for a European place next season.

"I'll fight together with my teammates to change the course of this season," said Ibrahimovic, who has never lacked confidence in a stellar and varied career. "I will do everything to make it happen."

The 38-year-old Swede has agreed a deal until the end of the season with the option to extend the contract for another season, the club announced Friday.

Ibrahimovic has taken his brash confidence with him wherever he has gone.

He needed it as a shield when forging a career against considerable adversity when he was growing up in Sweden. After starting out with modest Malmö, he then impressed enough with Amsterdam-based Ajax to earn a move to Italian powerhouse Juventus at the age of 23.

From there followed stints with Inter and Spanish giant Barcelona. He scored regularly for both, but for once he was overshadowed by the diminutive frame of Lionel Messi at Barca.

He stayed with the Catalan club only one season, taking the hint there was a bigger star than him shining, and so joined Milan for two seasons.

The 38-year-old Swede has agreed a deal until the end of the season with the option to extend the contract for another season, the club announced Friday

He then moved to Paris Saint-Germain, where he had a prolific four years, and subsequently to Manchester United and recently the LA Galaxy. But Ibrahimovic always spoke fondly of his time with the Rossoneri and keenly left the door open for a move back.

"I'm coming back to a club I hugely respect and to the city of Milan I love," said Ibrahimovic, Sweden's record scorer with 62 international goals and owner of nearly 500 club goals.

He has been named the best player in Serie A and the French Ligue 1 three times, and best foreign player in Italy five times.

The deal is subject to medical examination and Ibrahimovic will be in Milan on Jan. 2 to take it, before joining his teammates for his first training session.

If he's passed fit it will then be time for Ibra, as he is known, to show Milan's fans he has lost none of the old magic against Sampdoria on Jan. 6.

Fittingly for a player who craves the limelight, that match is at home.

Milan's fans will expect nothing less than instant success, and neither will he.