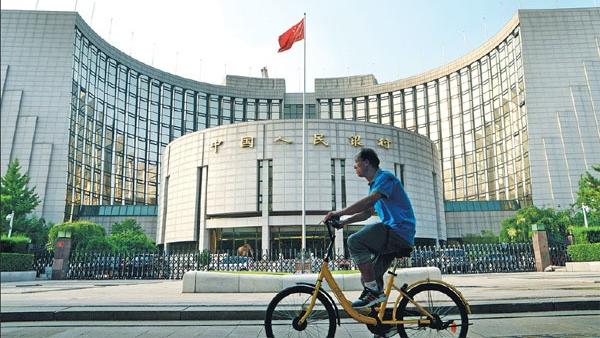 In this undated photo, a cyclist pedals past the headquarters of the People's Bank of China in Beijing. (FAN SHAOGUANG / FOR CHINA DAILY)

Recent faster-than-expected liquidity injection and more frequent monetary policy operations in China could change investors' strategy, as they predict a shift in the central bank's policy stance toward easing.

Without any confirmation from the nation's monetary authority, analysts are hunting for hints by comparing recent official statements.

Compared with the statement it issued for the fourth quarter of last year, the PBOC has become more cautious on its global economic outlook, and has softened its tone on deleveraging, said Lu Ting, chief economist in China with Nomura Securities

The People's Bank of China, the nation's central bank, in a statement after its monetary policy committee meeting for the second quarter on June 28, called for "closely monitoring domestic and external economic and financial market trends" and to "improve economic predictions and forward-looking policy fine-tuning", to maintain "reasonably adequate" liquidity conditions at the same time.

The meeting is usually held quarterly, and the latest one was the first gathering after the committee was reshuffled in mid-June.

Compared with the statement it issued for the fourth quarter of last year, the PBOC has become more cautious on its global economic outlook, and has softened its tone on deleveraging, said Lu Ting, chief economist in China with Nomura Securities.

"These changes are in line with recent shifts in the PBOC's policy stance and support our view of more policy easing measures in coming months," according to Lu, who noticed that the government has become increasingly aware of the disruptive impact deleveraging can have on the economy if it is too fast and aggressive.

Anxiety over China's recent economic trends emerged recently among some economists, given the increased external uncertain factors such as a potential Sino-US trade war and cross-border capital outflow pressure in emerging market economies as the US central bank plans to continually raise interest rates.

"Monetary policy is not the panacea to solve all of the problems, especially as the probability of external shocks is increasing," said Xu Zhong, director of the central bank's research bureau.

Monetary policy, he said, places more emphasis on maintaining stable macro environment under the circumstances and, above all, it will have limited room for maneuver to address potential economic downside risks.

Too much reliance on monetary policy is likely to conceal credit risks when liquidity is sufficient, and lower investment returns could be neglected when lending costs are at a low level, according to the central bank official.

"That may finally drive the monetary environment toward more easing but do little to restructure the economy, or lead to an even worse situation," added Xu, who suggested keeping monetary policy prudent and neutral and to effectively push forward the deleveraging process.

Since the second quarter, the central bank has accelerated policy fine-tuning including an expansion of the list of medium-term lending facility qualifying collateral and a 50-basis-point targeted cut of the reserve requirement ratio which will come into effect on Thursday.

It seems China's monetary policy is more asynchronous, while the US Federal Reserve is gradually normalizing its balance sheet and raising policy rates, according to analysts.

Central banks face tough challenges ahead, said the 2018 annual economic report issued by the Bank for International Settlements. "Only well into the second quarter of 2018 were there signs that a significant change could be in the offing, especially for emerging market economies."

The BIS report said this highlights the delicate balance central banks must strike: moving too slowly in the monetary policy normalization process could give rise to overheating and financial stability risks. On the other hand, moving too fast could trigger disruptive market reactions and harm economic recovery, not least as global debt levels relative to GDP have continued to increase and financial market valuations appear stretched.