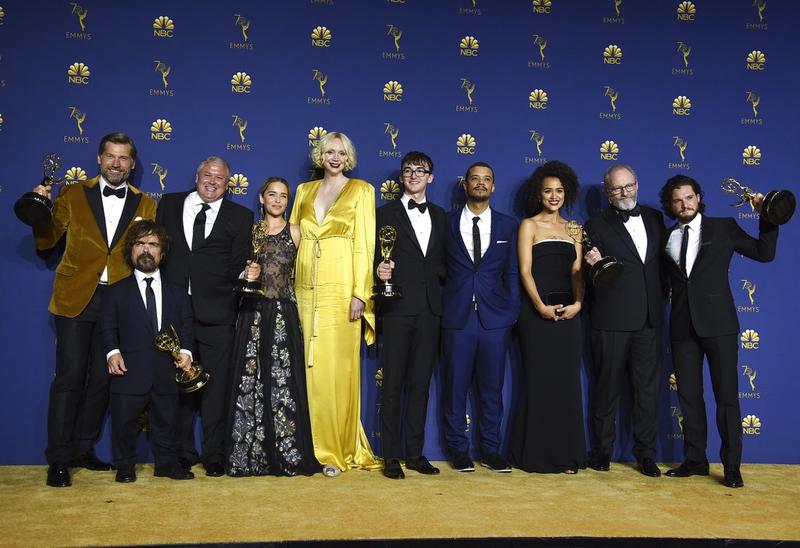 With the exception of Saturday Night Live, broadcast shows were shut out of the top awards as 21st-century platforms continued to overshadow traditional network fare like "This Is Us."

HBO, which had ceded its top-dog status in total nominations for the first time in 17 years in July (108, to Netflix's 112), ended up in a tie for wins with the streaming service at 23 each. 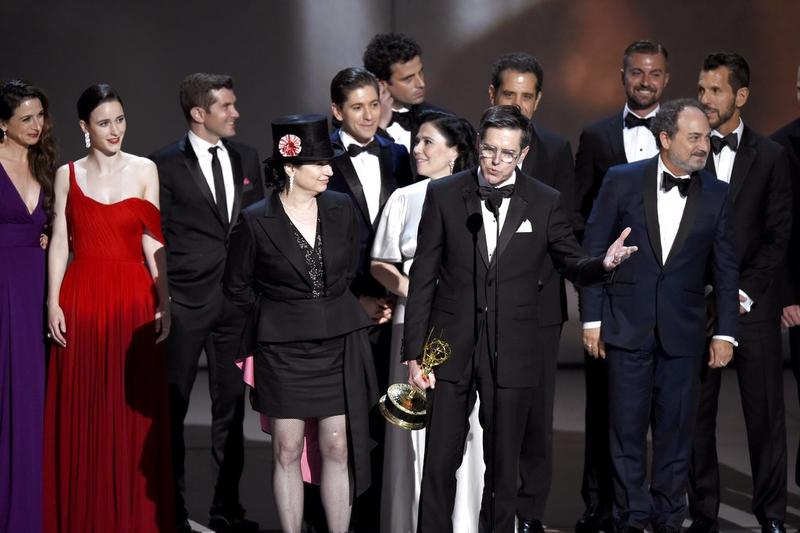 Amy Sherman-Palladino, front and center left, Daniel Palladino and the cast and crew of "The Marvelous Mrs. Maisel" accept the award for outstanding comedy series at the 70th Primetime Emmy Awards on Sept 17, 2018 at the Microsoft Theater in Los Angeles. (CHRIS PIZZELLO / INVISION / AP)

HBO, which had ceded its top-dog status in total nominations for the first time in 17 years in July (108, to Netflix's 112), ended up in a tie for wins with the streaming service at 23 each

Claire Foy of The Crown and Matthew Rhys of The Americans won top drama acting Emmys, their first trophies for the roles and last chance to claim them, with Foy's role as Queen Elizabeth II going to another actress and Rhys' show wrapped.

The field bested by Foy included last year's winner Elisabeth Moss for The Handmaid's Tale and Sandra Oh of Killing Eve, who would have been the first actor of Asian descent to get a top drama award.

"This wasn't supposed to happen," said a startled Foy. She played the young British queen who, as the series continues, will be shown advancing in years.

Game of Thrones, which sat out last year's Emmys because of scheduling, won its third best drama trophy despite competition from defending champ The Handmaid's Tale.

"Thank you for letting us take care of your people," Game of Thrones producer D.B. Weiss said to George R.R. Martin, whose novels and their characters fuel the drama.

In a ceremony that started out congratulating TV academy voters for the most historically diverse field of nominees yet, the early awards all went solely to whites. 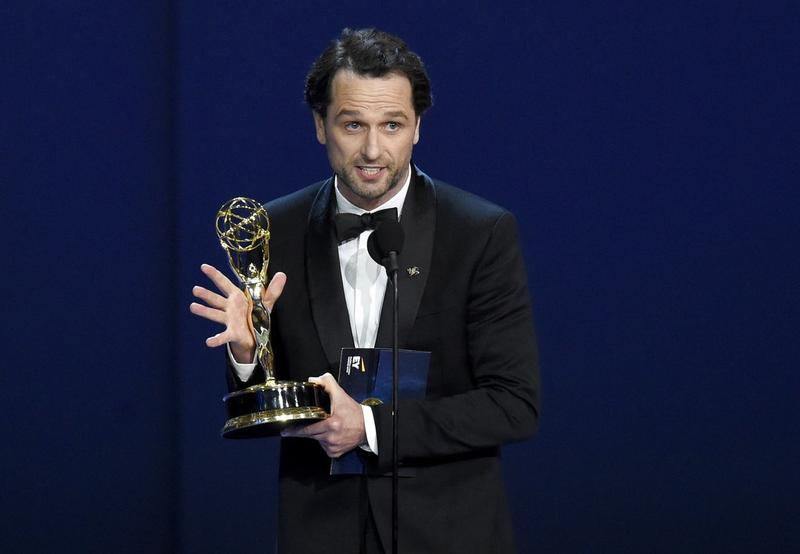 Matthew Rhys accepts the award for outstanding lead actor in a drama series for "The Americans" at the 70th Primetime Emmy Awards on Sept 17, 2018 at the Microsoft Theater in Los Angeles. (CHRIS PIZZELLO / INVISION / AP)

An African-American sweep of guest series actor awards at the recent creative arts Emmys suggested big changes ahead for the awards, which only recently have given significant honors to performers and creators of color.

But there was disappointment for Atlanta, which had claimed acting and directing trophies last year for its star and creator Donald Glover and seemed poised for more with 16 nominations.

Rather than become the first black-led comedy in 33 years to be named the best (since The Cosby Show in 1985), Atlanta was shut out Monday (it won two awards, including guest actor for Katt Williams, last week).

The showing by Mrs. Maisel extended the long winning streak of shows that focus on white lives, including Modern Family and Friends, with ethnic minorities rarely given screen time. 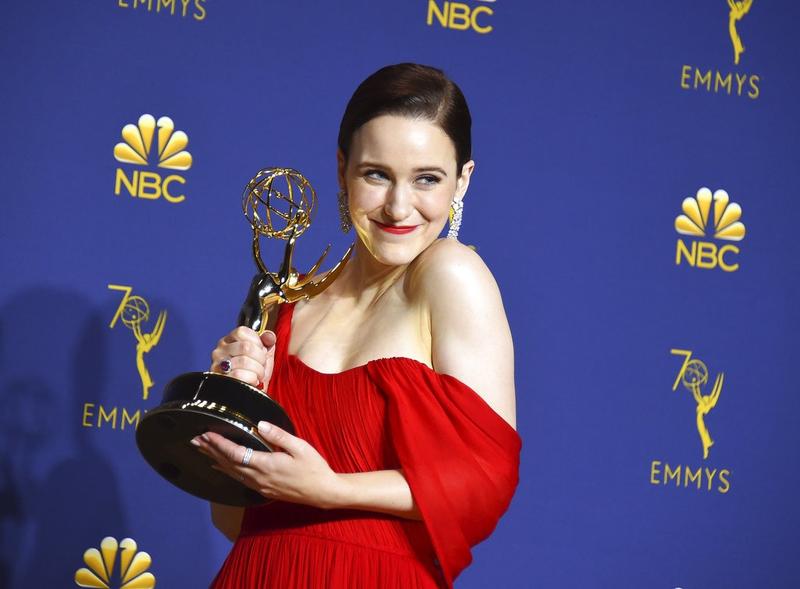 Rachel Brosnahan, winner of the award for outstanding lead actress in a comedy series for "The Marvelous Mrs. Maisel," poses in the press room at the 70th Primetime Emmy Awards on Sept 17, 2018 at the Microsoft Theater in Los Angeles. (JORDAN STRAUSS / INVISION / AP)

Then Regina King broke the string, with a best actress win in a limited series or movie for Seven Seconds, which tracks the fallout from a white police officer's traffic accident involving a black teenager.

"I feel like a lot of times we are so divided as a country that things are always black and white. I'm guilty of that a lot of times. I think that probably played into my assumption the chances of me winning was so small," King said backstage.

Peter Dinklage added a third acting trophy to his collection for Game of Thrones.

Brosnahan used her acceptance speech to give a shout-out to her comedy's celebration of women power.

"It's about a woman who's finding her voice anew, and it's one of the things that's happening all over the country now," she said. She urged the audience to exercise that power by voting.

Bill Hader collected the best comedy actor award for Barry, a dark comedy about a hired killer who stumbles into a possible acting career.

Henry Winkler accepts the award for outstanding supporting actor in a comedy series for "Barry" at the 70th Primetime Emmy Awards on Sept 17, 2018 at the Microsoft Theater in Los Angeles. (CHRIS PIZZELLO / INVISION / AP)

Henry Winkler, aka "The Fonz," won a supporting actor award — his first Emmy — for Barry, four decades after gaining fame for his role in Happy Days.

"If you stay at the table long enough, the chips come to you. Tonight, I got to clear the table," an ebullient Winkler said, with an equally delighted auditorium audience rising to give him a standing ovation. To his grown children, he said: "You can go to bed now, daddy won!"

The Emmys had a real-life dramatic moment when winning director Glenn Weiss, noting his mother had died two weeks ago, proposed to his girlfriend , Jan Svendsen. 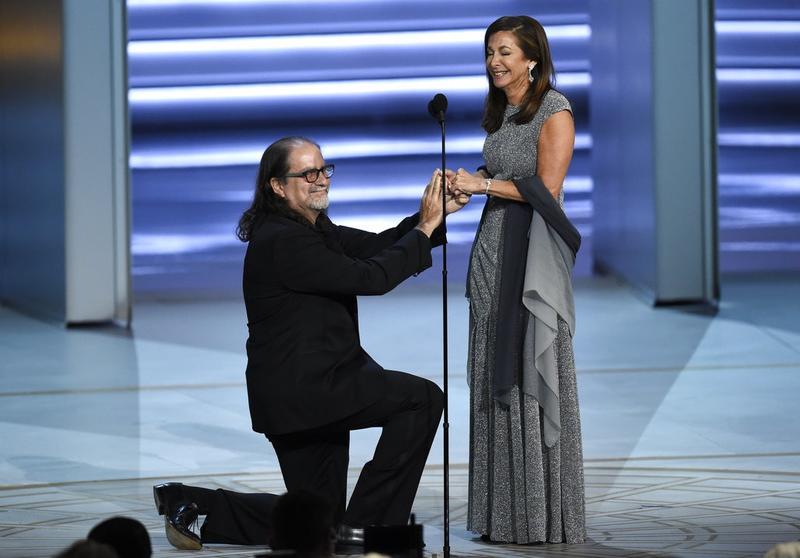 John Oliver, in picking up the trophy for best variety talk show award for "Last Week Tonight," thanked Weiss' girlfriend for giving the right answer or, he joked, the whole ceremony could have gone south.

The Emmys kicked off with a song, We Solved It, a self-mocking celebration to the diversity of nominees sung by stars including Kate McKinnon and Kenan Thompson. The tune included a mention of Oh's possible victory: "There were none, now there's one, so we're done," the comedians sang. 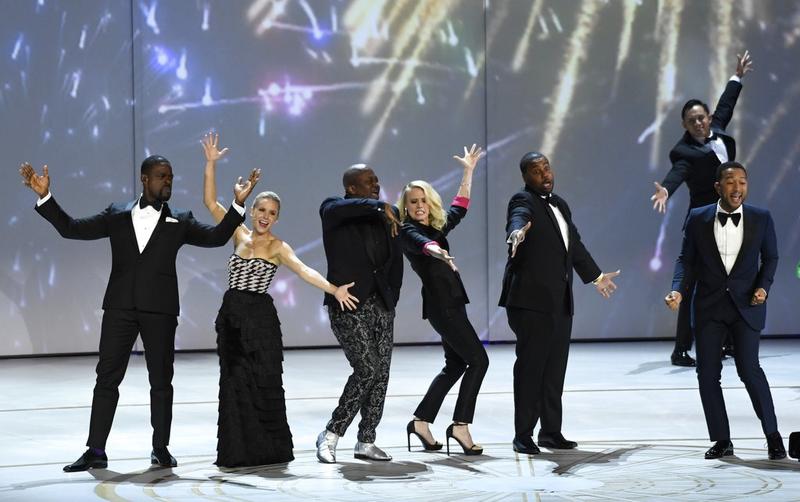 Oh played along from her seat: "Thank you, but it's an honor just to be Asian," said the Korean-Canadian actress.

Saturday Night Live creator Lorne Michaels, producing his second Emmy telecast in 30 years, was tasked with turning viewership around after the 2017 show's audience of 11.4 million narrowly avoided the embarrassment of setting a new low.

The ceremony clearly bore his stamp, with Michael Che and Colin Jost as hosts and familiar "SNL" faces, including Kate McKinnon and Alec Baldwin, as presenters and nominees. The long-running NBC sketch show, already the top Emmy winner ever with 71, won again for best variety sketch series.

The pressure was on Michaels because NBC and other broadcasters are increasingly reliant on awards and other live events to draw viewers distracted by online options.

The networks, which air the Emmy telecast on a rotating basis, are so eager for the ad dollars it generates and its promotional value for fall shows that they endure online competitors sharing — and dominating — the stage.