NEW DELHI/AYODHYA - Indian Prime Minister Narendra Modi scored a dramatic election victory on Thursday, putting his Hindu nationalist party on course to increase its majority on a mandate of business-friendly policies and a tough stand on national security.

Together we will build a strong and inclusive India. India wins yet again!

His re-election reinforces a global trend of right-wing populists sweeping to victory, from the United States to Brazil and Italy, often after adopting harsh positions on protectionism, immigration and defence.

Official data from the Election Commission showed Modi's Bharatiya Janata Party ahead in 300 of the 542 seats up for grabs, up from the 282 it won in 2014 and more than the 272 seats needed for a majority in the lower house of parliament.

That would give his party the first back-to-back majority for a single party since 1984.

"Together we will build a strong and inclusive India," Modi said on Twitter. "India wins yet again!"

Gandhi, the scion of the Nehru-Gandhi family dynasty, also congratulated his arch rival and Union Textiles Minister Smriti Irani who defeated him in the Amethi parliamentary constituency in northern state of Uttar Pradesh.

"I congratulate Smriti Irani, and I hope she will take care of Amethi constituency," he said. 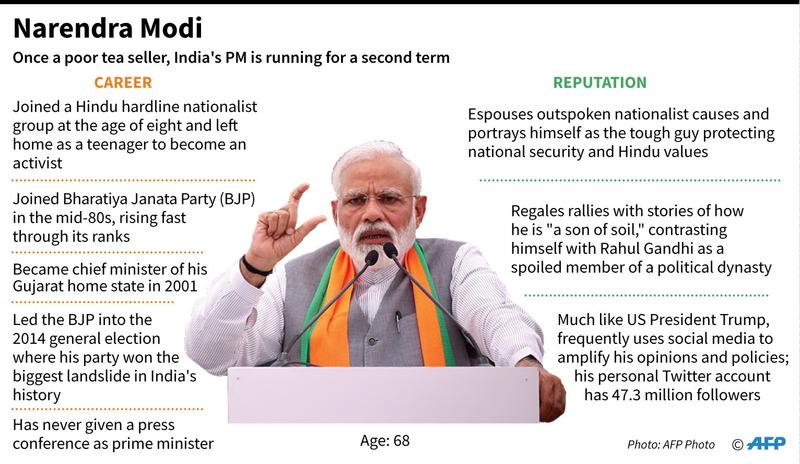 Modi has slashed red tape in the world's fifth-largest economy, though some overseas firms, including Amazon, Walmart and Mastercard, have complained about policies they say are designed to benefit domestic rivals.

He will face demands to provide jobs for the tens of millions of young people coming on to the market in the next few years and to boost depressed farm incomes.

"The immediate challenges are to address employment, the issue of agricultural income and revive the banking sector," said Madan Sabnavis, chief economist at Care Ratings in Mumbai.

But making good on his promise of unity will be difficult as the BJP campaign was often divisive, and India's Muslim minority has expressed fears that policies aimed at pleasing the Hindu majority could imperil their livelihoods.

Modi's pledge of a strong stand against a separatist movement in Muslim-majority Kashmir has fuelled tension with nuclear-armed rival Pakistan, although its prime minister, Imran Khan, congratulated Modi on his win.

"Look forward to working with him for peace, progress and prosperity in South Asia," Khan added on Twitter.

Besides a harder line on national security, BJP members will look to Modi for progress on a project to building a Hindu temple on the site of a mosque demolished by Hindu zealots in the northern holy town of Ayodhya in 1992.

"I want Modi to finish terrorism from Kashmir (and) make Pakistan bite the dust again and again," said Shekhar Chahal, a BJP worker from the capital, New Delhi.

"I am confident that Modi will also make the temple in Ayodhya."

Cheering supporters set off firecrackers and showered the mastermind of the campaign, BJP President Amit Shah, with petals as he arrived at party headquarters in New Delhi.

"It's a stamp of approval by voters on the honest and decisive leadership of Prime Minister Modi," said Nalin S Kohli, a BJP spokesman.

The NDA's predicted margin of victory, at 348 seats versus 85 for the Congress-led United Progressive Alliance, according to broadcaster NDTV, far exceeds survey forecasts in the run-up to the vote.

Nearly all exit polls predicted Modi’s BJP and its allies in the National Democratic Alliance would sweep to a comfortable victory over the rival Congress party and its United Progressive Alliance. 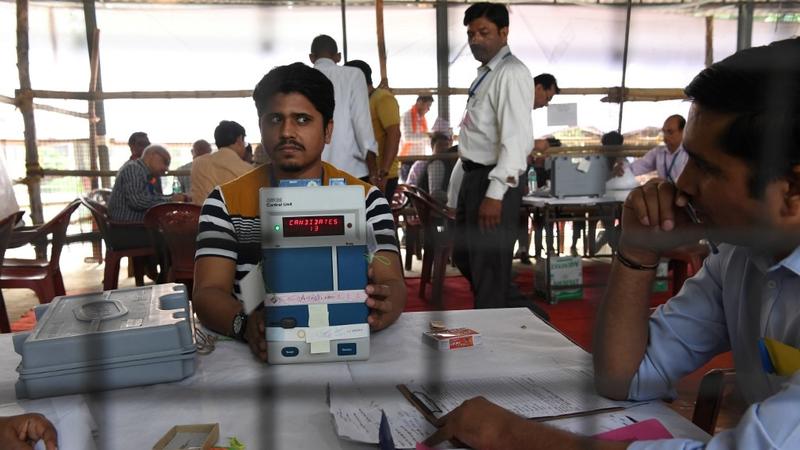 An Indian election official shows an open Electronic Voting Machine (EVM) to polling agents at a counting centre in Ghaziabad, India, on May 23, 2019. (PRAKASH SINGH / AFP)

Indian stocks surged more than 5 percent this week to hit record highs on Thursday, but the euphoria fizzled quickly, with stocks and the rupee ending the day weaker, as the focus returned to a faltering economy.