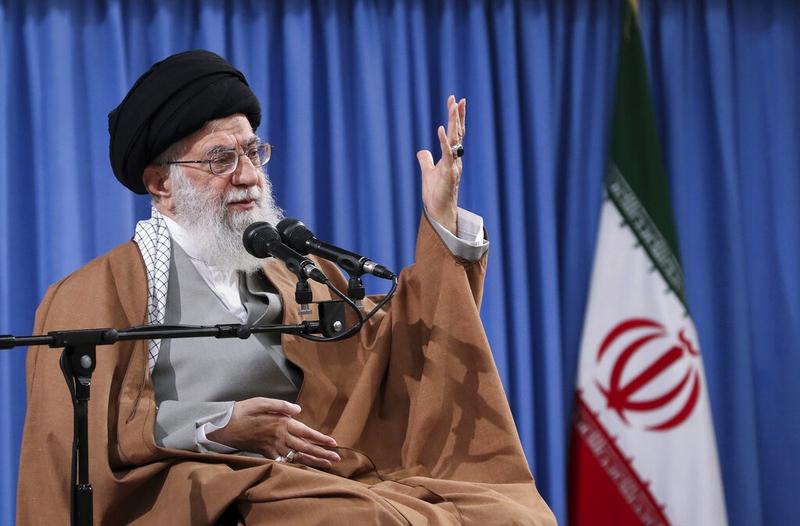 In this picture released by an official website of the office of the Iranian supreme leader, Supreme Leader Ayatollah Ali Khamenei speaks at a meeting with a group of Revolutionary Guards and their families, in Tehran, Iran, April 9, 2019. (OFFICE OF THE IRANIAN SUPREME LEADER VIA AP)

LONDON - Iran has appointed career diplomat and former nuclear negotiator Majid Takht Ravanchi as its envoy to the United Nations, state media said, as it tries to salvage a nuclear deal with world powers despite Washington's unilateral withdrawal.

Takht Ravanchi, 61, is currently Iranian deputy foreign minister for European and American affairs. He has also served as ambassador to Switzerland.

His move to the United Nations is significant since he was one of the negotiators who helped Tehran reach a nuclear agreement in 2015 with the United States, Britain, France, Russia, China and Germany.

The pact curbed Iran's nuclear program in exchange for relief from international sanctions. However, US President Donald Trump last year pulled the United States out of the deal, which was concluded before he took office, saying it favored Iran.

In spite of all the pressure in the past 40 years, Americans have failed to do a damn thing and their vicious move will bear no fruit

Other co-signatories are still trying to salvage the deal and shield Iran from US sanctions. President Hassan Rouhani, who could be weakened by damage to Iran’s economy if the deal falls apart, warned other signatories on Tuesday to honor their pledges before Tehran's patience runs out.

"In spite of all the pressure in the past 40 years, Americans have failed to do a damn thing and their vicious move will bear no fruit," Iran's Supreme Leader AyatollahAli Khamenei said.

Iranian President Hassan Rouhani also defended the corps as protectors of Iran, saying in a televised speech that the United States "holds a grudge" against the Guards who have "sacrificed their lives to protect our people, our revolution".

"This mistake will unite Iranians and the Guards will grow more popular in Iran and in the region ... America has used terrorists as a tool in the region while the Guards have fought against them from Iraq to Syria," Rouhani said.

Tehran has also threatened to disrupt oil shipments through the Strait of Hormuz in the Gulf if the United States tries to strangle Tehran's economy by halting its oil exports.

The head of Iran's Revolutionary Guards dismissed Washington's move and said they would increase their military capabilities.

Iran's arch rival Saudi Arabia welcomed the US decision on Tuesday. "The US decision translates the Kingdom's repeated demands to the international community of the necessity of confronting terrorism supported by Iran," Saudi state news agency SPA said, citing a foreign ministry source.

ALSO READ: China to back all efforts to safeguard Iran deal

Kuwait, meanwhile, is following up with the US decision to designate IRGC as a foreign terrorist organization, the Kuwaiti deputy foreign minister said Monday evening.

In a show of support, Iranian lawmakers wore Guards' uniforms to parliament on Tuesday, chanting "Death to America” as Iran marked the annual National Day of the Revolutionary Guards, the semi-official Fars news agency reported.

"America's decision to label the Guards as a terrorist group was the peak of stupidity and ignorance of the American leadership," Fars quoted parliament Speaker Ali Larijani as saying.

France called on Tuesday for avoiding any escalation of tensions in the Middle East region, saying France remained committed to the 2015 Iran nuclear deal.

"We urge people to avoid escalating tensions or destabilizing the region," the ministry added.