By Ma Zhiping and Liu Xiaoli in Haikou 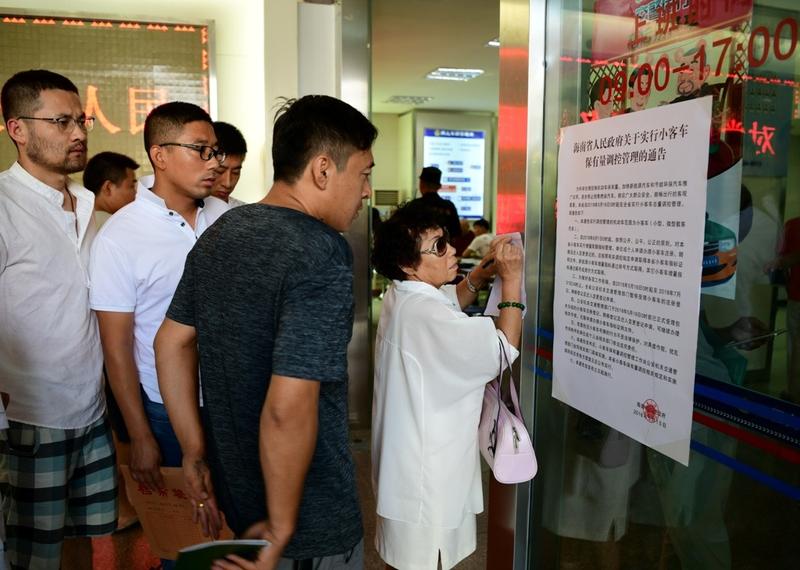 Residents read a notice about car purchases at a vehicle administrative office in Sanya, Hainan province, on Wednesday. (SHA XIAOFENG / FOR CHINA DAILY)

Hainan province launched a policy on Wednesday to restrict car purchases, with a view toward easing traffic congestion and promoting the use of new energy vehicles.

The move, which was announced on Tuesday, makes Hainan the ninth region on the Chinese mainland to adopt such a policy, joining Beijing, Shanghai, Guangzhou, Tianjin, Guiyang, Shenzhen, Hangzhou and Shijiazhuang.

Many auto dealers around Hainan were crowded until late on Tuesday night, with car buyers expecting to get a car before the announcement took effect at midnight.

Hainan has more than 9.25 million people and 1.18 million vehicles. Traffic jams have been a long-standing problem on the island, especially in the capital Haikou and the resort city of Sanya on the southern edge of the tropical island.

Every year, especially during the winter - which is the peak time for tourism - Sanya faces serious traffic congestion as thousands of cars are ferried to the island by visitors, making traffic worse.

The province released a new energy vehicle promotion plan in April during the Boao Forum for Asia 2018 annual conference.

"We are considering islandwide use of new energy vehicles by 2030," Shen Xiaoming, the governor, said at the Boao Forum.

The province plans to introduce 5,600 new energy vehicles into the market and build more than 10,000 charging stations this year, Shen said.