A night for romance 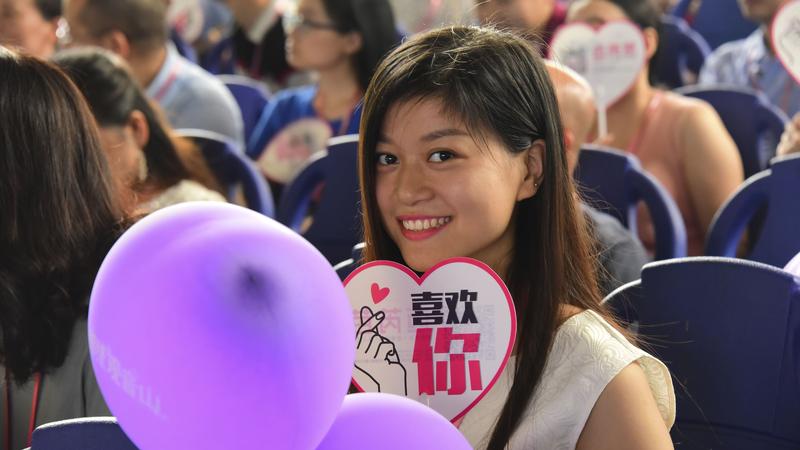 A young woman joins thousands of other singles at a dating event in Dongguan, Guangdong province. (AN DONG / FOR CHINA DAILY)

The forecast is for clear days ahead but tonight could see a quickening of the pulse and send hearts aflutter. Romance is in the air as China's own Valentine's Day - Qixi Festival, the seventh day of the seventh lunar month on the lunar calendar - falls today. And for many, the stars will shine brighter tonight.

An Na and her husband will celebrate their second month of marriage by "cooking a big dinner".

When An, an internet company worker in Shanghai, received a love letter from her groom at their wedding ceremony on June 7, the 29-year-old's eyes welled up. After dating for two years she was finally marrying her true love.

Sometimes romance needs a helping hand and in an age when technology plays such a vital part in all our lives, it should be no surprise that it can help with affairs of the heart.

Her matchmaker was a WeChat account called Moshang Huakai.

She discovered the platform in 2016 when one of her friends placed a post on the matchmaking account. The post was a detailed self-introduction of around 1,600 words, which included basic information on her education, family background, hobbies and friends' comments, as well as her expectations of her future boyfriend. Photos were also included in the post.

A questionnaire appeared at the end of the post. Anyone who wanted to contact her friend would have to fill it out before her friend decided whether or not to respond.

The post made a deep impression on An, especially when she realized that it was viewed by more than 3,000 people.

"It seemed that all the people with matchmaking posts on the platform were well-educated and as a woman with a postgraduate diploma, I wanted any future husband to have a diploma equivalent to mine," An recalls.

She was not shy and was "willing to tell people I am single and looking for a relationship". "It was great to have a platform that could help me make my circumstances known to more people," says An.

An wrote a self-introduction and posted it on the platform in March 2017. The post garnered about 4,000 views with 30 responses and inquiries.

"Most of the men who responded "were in the category she was looking for, An recalls.

"I wrote in the post that I enjoy travel and have visited more than 20 countries during my postgraduate years. People who asked for my contact number generally shared my interests."

The detailed information An posted on the platform did help her filter out some respondents.

And then, the magic of romance took over. "I met my boyfriend four months later. He was my future Mr Right."

Over the past two years, she and her husband-to-be traveled to a number of cities, including Taipei, Hong Kong and Macao.

On every trip they got to know each other better and they soon decided to tie the knot.

The Moshang Huakai platform has more than 150,000 followers, according to its female founders, Ma Yueliang and Long Lele, both 27.Each post generates feedback from around 30 people on average.

They set up the platform after college when they realized that a lot of people they met, both men and women, were looking for life partners.

"We asked people to introduce themselves and detail their backgrounds and expectations as clearly as possible. Similar backgrounds mean people will have things in common and will help filter out the ones you are not that into," says Long, who works in hotel management. She knows that the platform she helped create is effective, after all, because she met her husband through it. 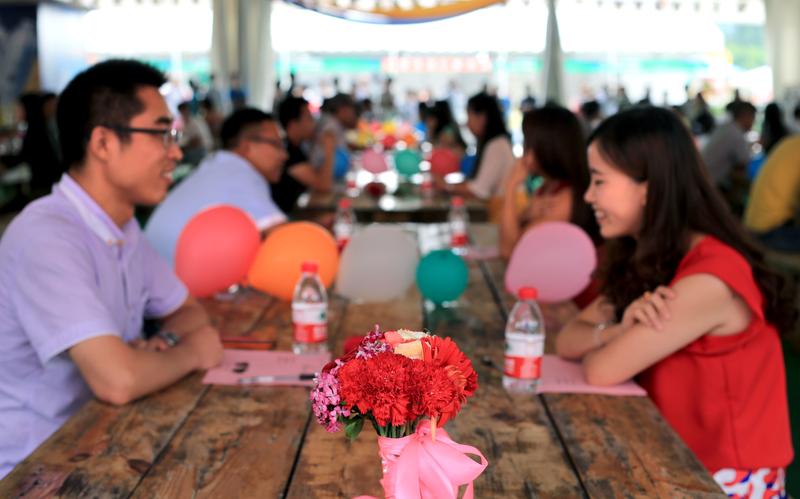 Co-founder Ma, who works in investment, is still single and is a firm believer in "the law of attraction".

"Before building this platform, I used to think sending posts about seeking love was embarrassing, especially for people who tend to be shy," says Ma. "But now I regard it as a brave and necessary step for starting a good marriage.

"Pursuing a relationship by taking action is better than just waiting around.

"We built this platform to encourage young adults to bravely tell people that they are seeking romance."

According to a report by the National Bureau of Statistics and Ministry of Civil Affairs, the marriage rate in China has been in decline for five consecutive years. In 2013, about 9.9 people got married for every 1,000 people, while last year the rate fell to about 7.2 people.

The key age group for marriage is also changing. In a report released by the Ministry of Civil Affairs, people aged between 20 to 24 accounted for the highest marriage registrations before 2012, but in 2017 that group had changed to people between 25 and 29. This group made up 36.9 percent of all registered couples. It is clear that younger people are deciding to wait that bit longer before taking the plunge.

In a 2018 survey released by Zhenai, a popular matchmaking website, almost 60 percent of those classified as single had not dated for three years. It also found that 70 percent of single people who live in cities feel anxious about how to get into a relationship, while only 40 percent who live in smaller townships have the same concerns.

"The website provides me with a great range of choices," says Huang Ying, 32, who works for a State-owned electricity company in Guangzhou, Guangdong province. She has spent 388 yuan (US$55) on Zhenai for a year to contact people via its app.

"Most users have verified their identity on the app and have a brief statement about themselves as well as what kind of person they are looking for," Huang says.

Huang did date a man she met on Zhenai for about six months but she broke up with him.

"I believe family and educational background are vital considerations when choosing a life partner," says Huang, who adds that there is no shortcut, as the only way to find the right person is to go out and socialize and not be afraid of rejection. 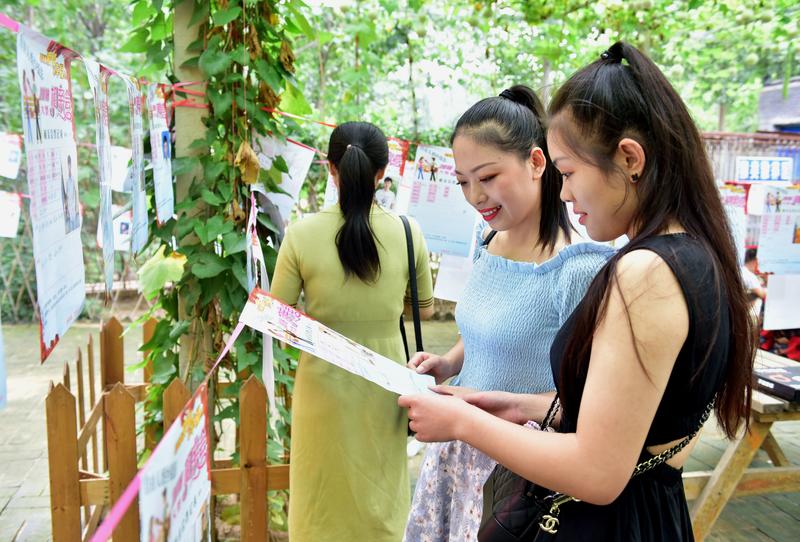 Wang Ziyu, 27, who works as a product manager at a startup company in Beijing, is going to attend an eight-minute blind date. This, as the name implies, is a speed dating event that is common in Western countries. Within the allotted timespan, he will talk with one female participant. He has taken part in these events three times in the past two months but still feels a bit unsure about the best way to break the ice with a stranger.

He says discussing work might seem self-centered, and personal information could be boring. As for hobbies, what if you know nothing about the other person's preferences?

"The participants talk to seven or eight people over an hour or so," he says. "Sometimes I would meet a girl with whom I am willing to share a lot, while sometimes a cold silence would descend."

The activities he attended were organized by the matchmaking platform Maisui Danshen Gongshe ("ear of wheat singles' community").

It claims to have 40,000 clients in Beijing and three brick-and-mortar meeting places around the capital.

Every night from 6:30 pm, each place will feature different blind date activities for about 20 people. Besides the eight-minute blind date, other activities include asking people to share a secret, do some daring tasks or play a board game, which is also a popular way for people to meet and interact.

Wang paid the platform 3,900 yuan, which allows him to participate in all these activities as many times as he likes until he gets married. Additionally, during his leisure time, he can also hang out at any of these cafe-styled places, where people can freely communicate and socialize.

The other choices are 3,000 yuan for a year's service, 2,000 yuan for half a year and 1,500 yuan for three months, according to Wang, but he chose the most expensive option.

"I came here searching for my lifelong partner but I realize that finding Ms Right is a process that requires patience. So, I chose the option without a time limit and visit the meeting places as often as I can," explains Wang.

He may have little chance of meeting many women in life or work, Wang confesses, but he'd like to talk to more women rather than idle away the weekends at home.

He has spent almost every weekend over the past two months at the Maisui Danshen Gongshe venues and also had his information published on its website. However, offline activities, such as talking face-to-face or attending events with other people, are his priority.

"I made nine new female friends on WeChat in two months. Maybe none of them is the one I am looking for, but at least I broadened my circle of friends," says Wang.

"A friend of mine in Beijing met her husband during her annual leave in Paris two years ago. Her future husband was a student in London. You never know where or when the right person will appear for you," he says.

"Maybe your other half is nearby, just around the corner, or far away on the road in front of you. All in all, I believe that going out to socialize and actively looking for my Ms Right is the best approach."