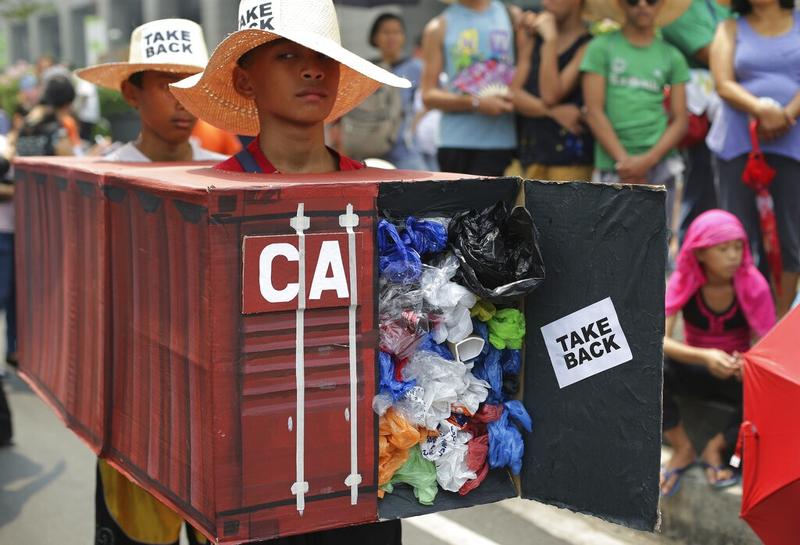 In this May 7, 2015, file photo, Filipino environmental activists wear a mock container vans filled with garbage to symbolize the 50 containers of waste that were shipped from Canada to the Philippines two years ago, as they hold a protest outside the Canadian embassy at the financial district of Makati, south of Manila,  (AARON FAVILA / AP)

MANILA - The Philippines government withdrew its diplomats in Canada and will "maintain a diminished diplomatic presence in Canada" until the North American country collects the garbage it shipped to the Philippines six years ago, Philippine Foreign Secretary Teodoro Locsin tweeted on Thursday.

READ MORE: Naming and 'shaming' the top polluters in the Philippines

Locsin's series of tweets came as Canada missed the deadline to retrieve tons of garbage it dumped to the Philippines back in 2013 and 2014.

Canada missed the May 15 deadline. And we shall maintain a diminished diplomatic presence in Canada until its garbage is ship bound there

Locsin said recall letters were sent to the Philippine ambassador and consuls in the country's mission in Canada at midnight Wednesday night.

"Canada missed the May 15 deadline. And we shall maintain a diminished diplomatic presence in Canada until its garbage is ship bound there," Locsin said.

In another tweet, he added, "To our posts in Canada: You have your orders. You are recalled. Get the next flight out."

The Canadian Embassy in Manila has yet to issue a statement on Manila's latest move.

Canada exported 103 shipping containers of garbage to the Philippines between 2013 and 2014. Only 69 shipping of the 103 containers remained. Thirty-four of them have already been disposed.

Philippine President Rodrigo Duterte accused the northern American country of failing to take action on the waste issue and threatened to ship the waste back to Canada. 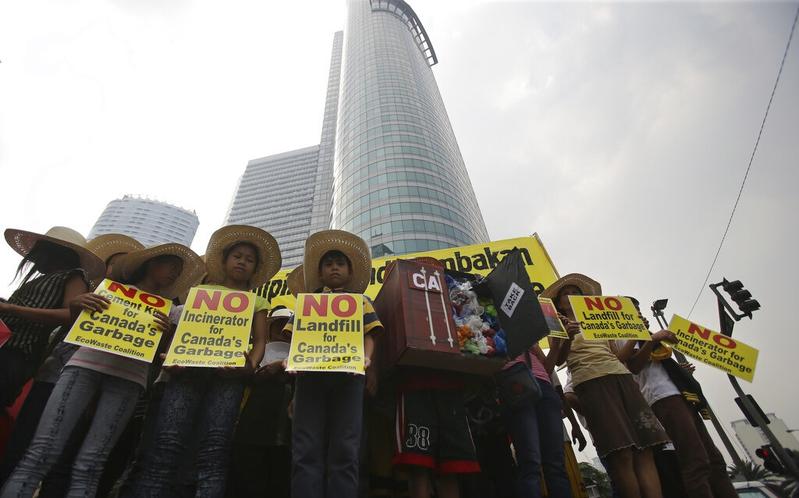 In this May 7, 2015, file photo, Filipino environmental activists hold slogans about the 50 containers of waste that were shipped from Canada to the Philippines two years ago, during a protest outside the Canadian embassy at the financial district of Makati, south of Manila, Philippines. (AARON FAVILA / AP)

Duterte even threatened to go to war against Canada over the trash issue. "(Let's fight Canada.) We'll declare war against them, (we can handle them. I'll return the trash. Just wait and see)," he said on April 23.

"Canada is strongly committed to collaborating with the government of the Philippines to resolve this issue and is aware of the court decision ordering the importer to ship the material back to Canada," said the Canadian embassy in a statement on April 24.

It added that "a joint technical working group, consisting of officials from both countries, is examining the full spectrum of issues related to the removal of the waste with a view to a timely resolution."

Last week, Duterte gave Canada until May 15 to remove the rotting garbage. But Canada missed the deadline.