Indonesia shuts some schools as haze again clouds the skies 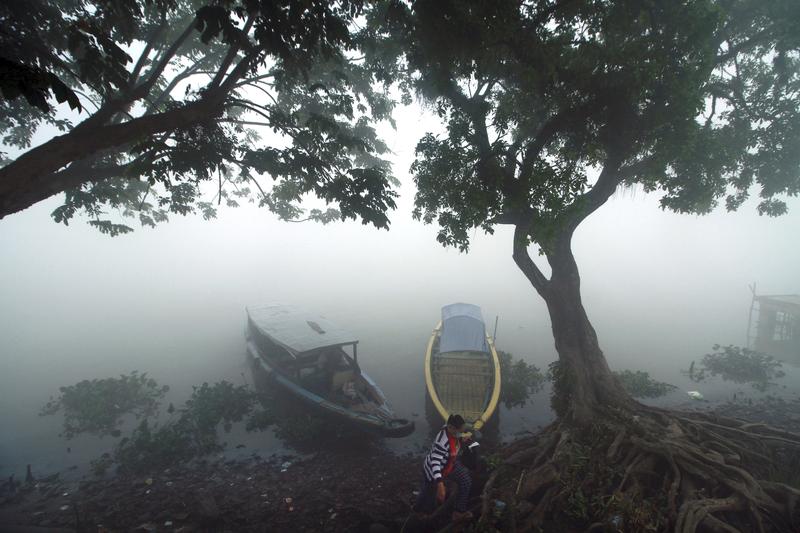 A woman walks on the banks of a river through thick haze from forest fires in Palembang, South Sumatra, Indonesia, Oct 14, 2019. (IWAN CHERISTIAN / AP)

The number of hot spots in parts of Sumatra and Borneo islands has been on the rise over the past week despite some rain, Indonesia’s weather agency said

An El Nino weather pattern this year has intensified annual dry-season fires, often caused by slash-and-burn clearing of forests and bush for farming, including plantations.

The number of hot spots in parts of Sumatra and Borneo islands has been on the rise over the past week despite some rain, Indonesia’s weather agency said in a statement, warning that residents should be on alert for smog.

A total of 1,547 hot spots, which indicate fires or heightened risk of fire, were detected in six provinces, the agency said, adding that smoke from the blazes may affect more provinces depending on the wind direction.

The statement made no mention of potential cross-boundary smoke. Thick haze from fires had drifted to neighboring countries at the height of the dry season last month, triggering a diplomatic dispute between Indonesia and Malaysia.

Some schools which had reopened after air quality improved, shut again this week.

Authorities in Palembang, the provincial capital of South Sumatra, closed schools for three days from Monday with an extension if conditions did not improve, state news agency Antara reported.

Residents were advised to wear masks when going out.

An aerial photograph taken on Monday showing Palembang engulfed in thick, yellow haze featured on the front page of the Jakarta Post newspaper on Tuesday.

“As a protective measure against smog, all students, teachers, and administrative employees are urged to wear face masks while they are in schools and on the way to and from schools,” Jambi government spokesman Abu Bakar, was quoted as saying.

For months, Indonesia has deployed thousands of personnel to fight the fires, utilizing dozens of aircraft to conduct water bombing and cloud-seeding efforts to trigger rain.

Indonesia’s disaster agency last month said it expected the arrival of the rainy season - due at this time - to end the fires, which have affected more than 320,000 hectares of forests.