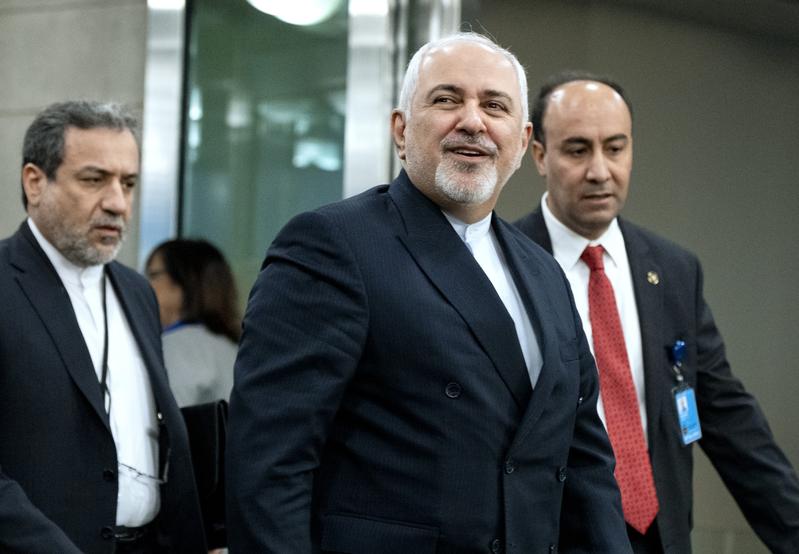 UNITED NATIONS — Britain, France and Germany joined the United States on Monday in blaming Iran for attacks on key oil facilities in Saudi Arabia, but the Iranian foreign minister pointed to claims of responsibility by Yemeni rebels and said: "If Iran were behind this attack, nothing would have been left of this refinery."

Fallout from the Sept 14 attacks is still reverberating as world leaders gather for their annual meeting at the UN General Assembly and international experts investigate, at Saudi Arabia's request, what happened and who was responsible.

The leaders of the United Kingdom, France and Germany released a statement reaffirming their support for the 2015 Iran nuclear deal, which the US exited, but telling Iran to stop breaching it and saying "there is no other plausible explanation" than that "Iran bears responsibility for this attack."

They pledged to try to ease tensions in the Middle East and urged Iran to "refrain from choosing provocation and escalation."

British Prime Minister Boris Johnson said late Sunday while flying to New York that the UK would consider taking part in a US-led military effort to bolster Saudi Arabia's defenses after the drone and cruise missile attacks on the world's largest oil processor and an oil field.

Iran's foreign minister, Mohammad Javad Zarif, denied any part in the attacks. He said Monday that Yemen's Houthi rebels, who claimed responsibility, "have every reason to retaliate" for the Saudi-led coalition's aerial attacks on their country.

He also stressed that on the eve of President Hassan Rouhani's visit to the United Nations in New York City "it would be stupid for Iran to engage in such activity."

Zarif called it an attack "with high precision, low impact" and no casualties. In the refinery, there were facilities that would have taken the Saudis a year to repair, he said. "Why did they hit the lowest impact places?" Zarif asked, saying if Iran was responsible, the refinery would have been destroyed.

France has been trying to find a diplomatic solution to US-Iranian tensions, which soared after the Saudi attacks, and has carefully avoided assigning blame.

Earlier on his way to New York, French President Emmanuel Macron said he remained "cautious" about attributing responsibility for the attacks. There was no immediate explanation of why he later shifted positions and blamed Iran.

Macron said at a UN news conference not long before the statement was issued that he planned to meet separately with both Trump and Rouhani over the next day and would work to foster "the conditions for discussion" and not escalation.

Zarif, however, ruled out any Iran-US meeting. He said Iran had received no request from the US, "and we have made clear that a request alone will not do the job."

He said Trump "closed the door to negotiations" with the latest US sanctions, which labeled the country's central bank a "global terrorist" institution — a designation the Iranian minister said the US president and his successors may not be able to change.

"I know that President Trump did not want to do that. I know he must have been misinformed," Zarif said in a meeting with UN correspondents.

Zarif said he plans to meet Wednesday with ministers of all five countries remaining in the 2015 nuclear deal from which Trump withdrew, including Russia and China. 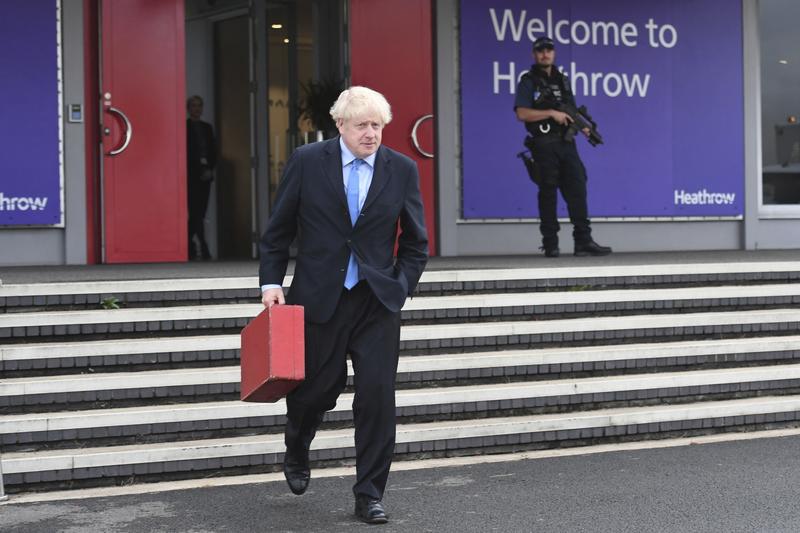 Britain's Prime Minister Boris Johnson walks to board his plane at London's Heathrow Airport as he heads off for the annual United Nations General Assembly in New York, Sept 22, 2019. (STEFAN ROUSSEAU / PA VIA AP)

Johnson, the UK prime minister, said Britain still backs the existing nuclear agreement and wants Iran to stick to its terms but urged Trump to strike a new deal with Iran.

"Whatever your objections with the old nuclear deal with Iran, it's time now to move forward and do a new deal," he said.

Asked about Johnson's suggestion, Trump said he respects the British leader and believes the current agreement expires too soon.

The joint UK, France, Germany statement urges Iran to reverse its rollback on key provisions in the 2015 nuclear deal and calls for a new agreement.

"The time has come for Iran to accept negotiation on a long-term framework for its nuclear program as well as on issues related to regional security, including its missiles program and other means of delivery," the three countries said.

Shortly before leaving for the UN meetings Monday, Iran's Rouhani said on state television that his country will invite Persian Gulf nations to join an Iranian-led coalition "to guarantee the region's security."

Rouhani said the plan also encompasses economic cooperation and an initiative for "long term" peace. He planned on presenting details while at the United Nations.

Zarif said the new Hormuz Peace Initiative — with the acronym HOPE — would be formed under a UN umbrella with two underlying principles: nonaggression and noninterference. He said it would require a major shift from countries "buying" security from other nations or mercenaries and instead promote the notion that "you can gain security relying on your own people and working with your neighbors."

Johnson said he would meet Rouhani at this week's UN gathering. He said he wanted Britain to be "a bridge between our European friends and the Americans when it comes to the crisis in the Gulf."

Johnson stressed the need for a diplomatic response to the Gulf tensions but said Britain would consider any request for military help.

The Trump administration announced Friday that it would send additional US troops and missile defense equipment to Saudi Arabia and the United Arab Emirates as part of a "defensive" deployment. Officials said the number of troops was likely to be in the hundreds.

"We will be following that very closely," Johnson said. "And clearly if we are asked, either by the Saudis or by the Americans, to have a role, then we will consider in what way we could be useful."

A UK official told The Associated Press that a claim of responsibility for the attacks by Iran-allied Houthi rebels in Yemen was "implausible." He said remnants of Iran-made cruise missiles were found at the attack site, and "the sophistication points very, very firmly to Iranian involvement."

The official, who spoke on the condition of anonymity to discuss intelligence findings, did not say whether Britain believed the attack was launched from Iranian soil. Iran denies responsibility and has warned any retaliatory attack targeting it will result in an "all-out war."

Meanwhile Monday, Iranian government spokesman Ali Rabiei suggested the release of a British-flagged oil tanker held by Tehran since July would be imminent, though he doesn't know when it will leave.

READ MORE: Iran's Guard says ready for 'any scenario' amid US standoff

The Stena Impero has not turned on its satellite-tracking beacon in 58 days and there has not been any sign that it has left its position near Iranian port city of Bandar Abbas.

Iran's Revolutionary Guard seized the vessel after authorities in Gibraltar seized an Iranian crude oil tanker. That ship has since left Gibraltar, leading to hopes the Stena Impero would be released.