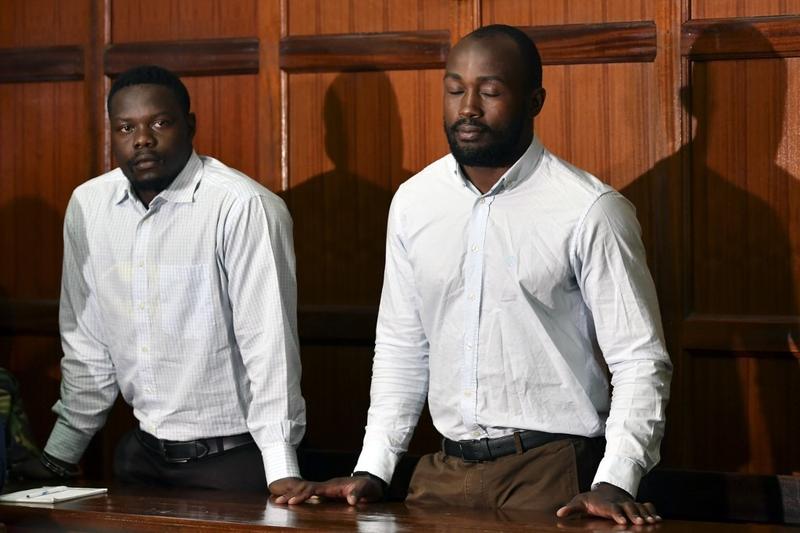 NAIROBI — What started out as a disgruntled social media post accusing two high-ranking budding stars in March 2018 ended in Kenya 7s players Frank Wanyama and Alex Olaba being convicted of rape and jailed for 15 years each by a Nairobi court last week after a sensational trial that gripped a nation and beyond.

The victim, identified in court papers as W.A, took to Instagram to air her story after attempts to reach out to the accused to negotiate a settlement over the matter failed, having discovered the alleged sexual assault had led to pregnancy.

The victim, identified in court papers as W.A, took to Instagram to air her story after attempts to reach out to the accused to negotiate a settlement over the matter failed, having discovered the alleged sexual assault had led to pregnancy

"On February 10, 2018 (my birthday) I was raped by two men...I could have reported the case to police that day but I was still in denial, shock and exhausted! I didn't want to report also because of the profile of these rugby players.

"The main man who actually studies law and knows by now even if I report him he is still going to get away with it is Frank Wanyama," she said.

"More than a month later I found out I'm pregnant from the ordeal, pregnant not by choice but by rape. Reporting a case now will not have any impact because the way the system is set up, it helps the rapist, never the victim," she posted on social media on March 31 of last year.

The viral post sparked huge backlash online in the east African country that is still grappling to come to terms with women rights and soon after, the office of Kenya's Director of Public Prosecutions (DPP) took up the matter, starting a process that has thrown the futures of Wanyama, 23 and Olaba, 22, into jeopardy.

"The ODPP treats information about rape very seriously. Be rest assured that the matter is being given due attention as matter of urgency.

"The ODPP has already got in touch with Kilimani DCIO and action is being taken," a tweet from the public prosecutor at the time read. The DPP instructed the criminal office of one of Nairobi police precincts in Kilimani to take over the matter.

"The ODPP has already got in touch with the victim and appropriate action is being taken in consultation with DCIO Kilimani," the DPP further assured.

On Aug. 16, a week after the initial sentencing was postponed, Nairobi's Milimani Courts Chief Magistrate Martha Mutuku jailed the accused for 15 years in a verdict that shook local rugby and the sporting fraternity in general.

"While this appears to be the emerging jurisprudence, the Act still stands as the law. I find that custodial sentence is appropriate in this case. I impose a minimum sentence of 15 years to the first accused (Wanyama) and the second accused (Olaba)," Mutuku ruled in delivering the maximum sentence under the Kenya Sexual Offences Act.

Wanyama and Olaba are in the process of appealing their conviction but the trial and subsequent verdict exposed the debauched world of Kenyan sport.

For years, claim of abuse of women by well-heeled, famous and young rugby stars had simmered under the surface but until the case of W.A came to light, sordid tales remained the subject of the rumor mill.

"(This is) a big lesson to rugby players and women coming for rugby. First, these rugby players are full of pride when they become stars. They suddenly become disrespectful almost to everyone; the ladies are the most affected. They think every woman liking them is out to have sex with them. I wasn't surprised when the rape allegations came out," a long-serving rugby official who requested anonymity since the matter is still under legal review told Xinhua.

"Women need to draw boundaries. Most have been lured to sex parties organised by these players hence these rape cases. Some are called Pool parties," the official added.

Sex, alcohol and drugs have been part and parcel of Kenyan rugby - especially the sevens version - where domestic events have earned notoriety for depravity.

The Masaku 7s - a discontinued round of the Kenya Rugby Sevens Series held in Machakos, some 70km southeast of Nairobi - was labelled the Biblical 'Sodom and Gomorrah' and served as a prime example of the excesses associated with the sport.

Immoral photos from the event showing amorous behavior in excess shocked the nation, fuelling the notion of rugby as a den of iniquity in Kenyan sport.

Another past notable figure in Kenyan rugby maintained the steep sentence slapped on Wanyama and Olaba was the wakeup call the sport needed to snap out of its randy reputation.

"The lesson in my opinion is just what is needed to bring sanity to the game's culture despite the sentence being a tad too harsh. (The players should) know their limits, know that they are under scrutiny because of the game's profile and current limelight," the person who has worked inside the Kenyan 7s and 15s set up for years told Xinhua.

"I also think that mentorship programs are very important too. Players need to be guided on and off the pitch. These boys get into the national team; earn lots of money and change," they added.

A source disclosed that players 'were reluctant' to participate a program established a few years ago that saw Kenya Rugby Union partner with a local church aimed at imparting values, life skills and behavioral conduct expected of people in their positions.

"We need to go the South Africa or (New Zealand) All Blacks way where a national team call up is followed by sessions on what it means to don national colors," they went on.

Kenya Harlequins RFC, the team Wanyama and Olaba played for, condemned any form of violence and stated that it respected the court's decision.

"The club is aware that both players will be pursuing an appeal in determination to clear their names. We trust that they will be accorded fair hearing," a statement from the team read in part.