Zhang: Victory my gift to China 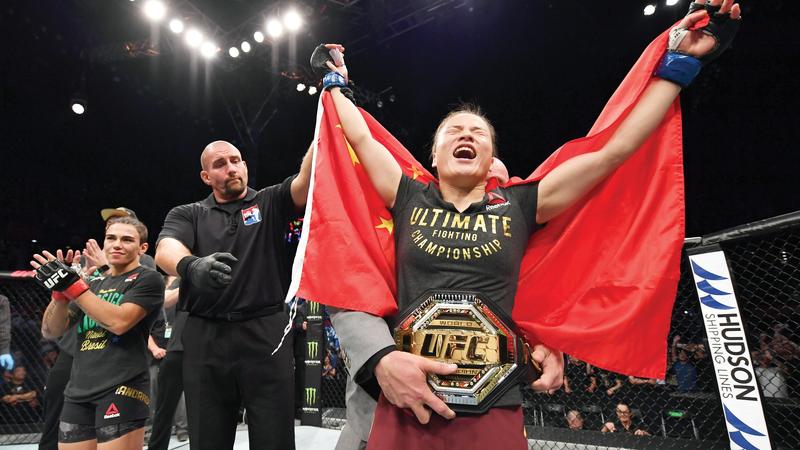 Patriotic Zhang Weili dedicated her historic Ultimate Fighting Championship victory in Shenzhen on Aug 31 to the 70th anniversary of the People’s Republic of China.

Zhang entered the strawweight bout as a big underdog to Andrade, who is tied with compatriot Amanda Nunes for the most UFC wins (11) by a woman.

However, after a flurry of devastating knee kicks, elbows and punches, Andrade was floored in the 42nd second of the first round and the challenger was declared winner by TKO.

“Last year in Beijing I vowed to become the first Chinese champion, and I did it!” said an elated Zhang.

“As a Chinese person, I feel so proud. Today, I want to dedicate this victory to the 70th anniversary of the motherland,” she added, referring to the approaching Oct 1 celebrations.

UFC boss Dana White declared Zhang “the most vicious woman on the planet right now” and revealed he is already planning the new champ’s next fight in the United States.

White told Xinhua he had received calls from agents and marketing companies in the US keen to represent Zhang.

The Chinese champ, however, was not entirely enthusiastic about the idea initially.

“I would like to get on pay-per-view for the next fight but I would also like the pay-per-view event to take place in China,” Zhang said, before adding: “If Dana wants me to fight in the US, that’s fine.”

Zhang appealed to White to smooth out some logistical concerns she has about a US fight.

“Please make sure all my corner can come because last time they couldn’t, because of visa issues,” she said.

“I won the belt this year in Shenzhen because all my coaches are here with me, supporting me. I don’t have a name for my next opponent right now. I will take whoever UFC gives to me.”

The decision to select the Chinese as the challenger had raised eyebrows as Zhang was only the sixth-ranked strawweight in the world.

With six years’ experience in UFC, Andrade has a reputation for brutally seeing off opponents. She was coming off a crushing first-round title victory in May over then-champ Rose Namajunas of the US.

But Zhang, who is known for her ferocious “buzz saw” attacking style, never allowed Andrade to get going at Shenzhen Universiade Sports Center.

Both fighters came out swinging hard, with Zhang caught by a stiff left hook that momentarily left her shaky on her feet.

However, she regained her composure, connected with a swift right and got Andrade in a clinch, landing several elbows to the side of the head. Zhang then transitioned to nail Andrade with four devastating knee kicks to the face.

Andrade crashed to the canvas and was caught with a single blow to the temple before the referee stepped in to save the Brazilian from further damage.

“I think the keys to my win were my calm mindset and the strategy defined by my coaches. All the strategies were practical and predicted every move to help me seize every opportunity,” Zhang said.

She was the first Chinese fighter to even get a title shot from the UFC, which is now pushing hard into a Chinese market where interest in mixed martial arts, or MMA, is growing rapidly.

Afterwards, Zhang reiterated her desire to inspire more young Chinese women to take up MMA, and said she hopes to be a source of inspiration for women, both in MMA and everyday life.

There was more joy for China on the undercard when unranked welterweight Li Jingliang from Xinjiang earned a last-minute knockout over Brazil’s 13th-ranked Elizeu Dos Santos.

With both men wary of each other’s striking power, fans were treated to an engrossing tactical battle.

Li, who had a reach advantage of two and a half inches, fought intelligently and judged Dos Santos’ range perfectly.

Li was most troubled by Dos Santos’ kicks, however with the Brazilian down on the scorecards in the third, he threw caution to the wind and the Chinese capitalized. As Dos Santos opened up, Li connected with a huge right to end the contest in stunning style.

In the post-fight media conference, White said that Li “looked ready” for top-ranked fighters in the division.

There were also victories for Kai Kara-France of New Zealand, Japan’s Mizuki Inoue and Anthony Hernandez of the US.