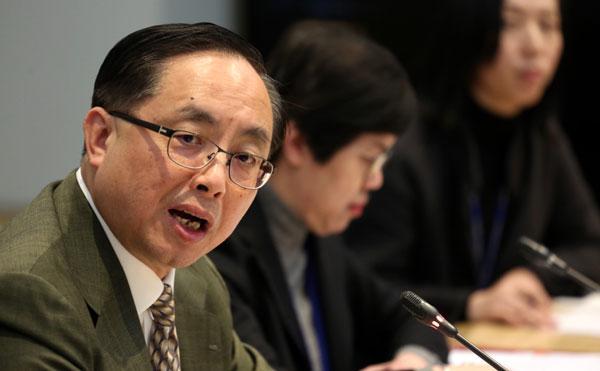 SYDNEY - Secretary for Innovation and Technology of China's Hong Kong Special Administrative Region (SAR) Nicholas Yang said Friday that Hong Kong and Australia "will have to think about smarter ways of using robotics and artificial intelligence" to tackle an aging society.

The Hong Kong official made the remarks during his trip to Australia to attend a development and opportunities forum in Sydney.

Yang told Xinhua that "we can't avoid the aging population issue, so the whole world will have to look at it."

He said Hong Kong faces big challenges in terms of an aging society.

Although many would see this difficult issue as a burden, Yang sees a great opportunity to grow the innovation sector and drive new industries.

In terms of keeping people aging healthily, then we have to think in terms of biotechnology and biomedicine

"Because the birth rate can not keep up, then we will have to think about smarter ways of using robotics and artificial intelligence," Yang said.

"In terms of keeping people aging healthily, then we have to think in terms of biotechnology and biomedicine."

Yang believed these challenges can be overcome with collaboration and cooperation in new technology development.

"Australia really has a strength in biomedicine and... strong regulatory setups," Yang said.

"Hong Kong also has a strength in biomedical research. We have a bunch of biomedical and biotech entrepreneurs."

"So I believe this is an area where we can collaborate together and build something that is meaningful for both regions."

During his visit, Yang met with Australian Minister for Innovation Arthur Sinodinos to identify opportunities where the two economies can cooperate.

"From our point of view, there is a lot to be gained from increasing and strengthening those links," Sinodinos said at the forum.

Australia currently makes up 5 percent of the 2,000 technology startup companies operating in the Hong Kong SAR.

"For us it's not only important to have specific government programs to promote innovation, it's also about having a culture that encourages entrepreneurialism and risk taking," Sinodinos said