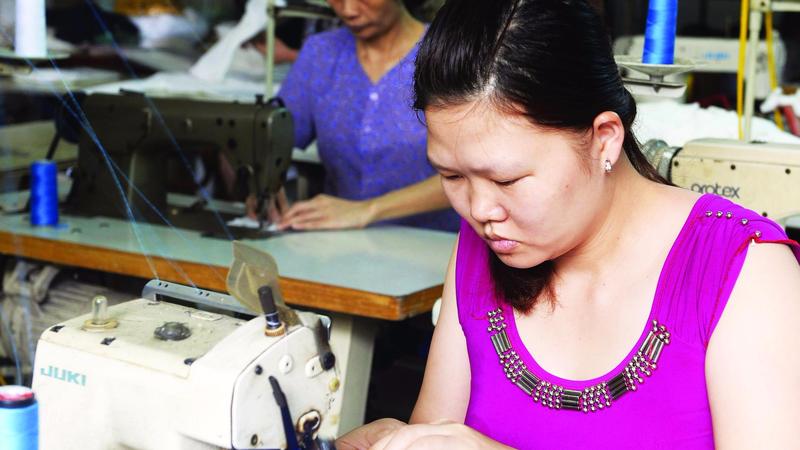 Some 9 million people, mostly young women, employed in the textile, garment and footwear industries in Southeast Asia are facing an uncertain future from the advance of robot technology.

They work in poorly lit factories on long assembly lines where the work is dirty, boring and repetitive.

Badly paid, overworked and susceptible to injuries ranging from lung ailments to lost fingers, they produce garments and footwear for some of the biggest brand names in the world.a

As automation takes over more and more jobs in all sectors of the global economy, these workers face the prospect of being replaced by automated assembly lines or ‘sewbots’.

Even if automation in garment and shoe factories does not happen immediately, it is on the horizon, and Southeast Asia should be prepared.

In a report earlier this year, the ILO said companies are attracted to automated technology because of “competitive pricing and quality, and by the mitigation of reputational risk”.

Gary Rynhart, a senior specialist on employers’ activities in Southeast Asia and the Pacific for the ILO, said “technology will get rid of a lot of dirty and dangerous jobs … so that is a plus.

“But it will require a fresh approach by countries in the region to seize new opportunities,” he told China Daily Asia Weekly.

“The worry is we don’t see a lot of that urgency from policymakers in the ASEAN region. The exception, however, is Singapore.”

Automation has become a major contributor to Singapore’s economic growth, said Walter Theseira, a senior lecturer of economics at the Singapore University of Social Sciences.

For more than two decades, the city-state’s economic expansion was driven primarily by immigration, particularly of medium and lower skilled workers, he said. But as the technology revolution began to spread around the world, Singapore realized it needed to move into areas of industry that required a highly skilled workforce.

According to Theseira, two factors are driving automation in Singapore.

“Growth driven by lower-skilled immigration has been linked to low productivity and is unsustainable because of the strain on infrastructure and integration with the resident population. Automation is seen as a solution to this problem.

“The export-oriented sectors in Singapore, such as electronics, biomedical and petrochemical manufacturing, are highly productive and use the latest technology,” he said.

Meanwhile, there is the “more important problem” concerning sectors which are less productive yet resistant to change. These are the industries that cater more to Singapore’s domestic market, including construction, consumer services and the food and beverage sector.

“These sectors are dominated by small and medium enterprises, do not use significant amounts of technology, and are used to relying on lower cost, low- and medium-skilled foreign workers,” Theseira said.

“There is potential demand there, but there needs to be some policy coordination to convince these sectors to adapt and change.”

Few would dispute that automation brings increased efficiency and productivity. A recent ILO study said that over half of all jobs in five Southeast Asian countries — Thailand, the Philippines, Vietnam, Indonesia and Cambodia — could be automated in the next decade or two.

While that may sound alarming, Rynhart of the ILO made the point that technology is “always replacing jobs, changing them, making them better or creating entirely new jobs”.

“If you currently work in mobile phone technology, social media or a related sector, then your job didn’t exist 10 or at most 15 years ago,” he said.

“There always has been the threat of technological upheaval in the workplace along with the naysayers and Luddites that went with it — from the industrial revolution to the move from horse to automobile.”

Rynhart cited the telephone, commercial airplanes, even modern kitchens, saying they all came along in a transformative way, yet the “sun still came up in the morning”.

“Societies progressed. And job quality improved as technology replaced the jobs we didn’t want to do or need to do,” he said. “So it’s hardly surprising when some people shrug their shoulders and say: Why the fuss now?”

But he went on to explain that the difference today is threefold.

“First, speed. The lag between the inventive and innovation processes and commercialization (from patent to operation) has narrowed considerably,” he said.

“Technologies are diffusing much faster now than they have in the past. It took the telephone 75 years to reach 50 million users. Angry Birds took 35 days to reach that number,” he said, referring to the popular mobile game franchise.

Second is the pervasive and transformative nature of new technologies.

“Technologies such as 3D printing can be deployed everywhere from high-tech industries such as aerospace to build jet engines, to back garden sheds to produce gardening equipment.”

He said this technology has now evolved to the extent that it can produce almost any component using metal, plastic, mixed material and even human tissue.

The third difference now, Rynhart said, is the potential impact on developing countries.

“In the manufacturing sector, many enterprises were reluctant to use industrial robots because they were seen as expensive, lacking reusability (as they were custom made) and having a short product life cycle. Critically, it was still possible to find labor with wages low enough to do an equivalent robotic job,” he said. “All of those factors have now changed.”

Recent advances in technology have cut the costs of robots considerably and increased their capabilities, as a new generation of reprogrammable, multipurpose machines comes into service. By some estimates, an investment in industrial robots can be repaid in less than two years.

This technological transformation will have an impact on developing countries in Southeast Asia, especially in those low-end, labor-intensive sectors such as footware, clothing and textiles, according to the ILO.

It said technology will be adopted “increasingly” as the cost declines and innovations become accessible to even small enterprises.

“During previous incarnations of technological change — from the industrial revolution through to more recent iterations — new manufacturing technologies mainly benefited low- and medium-skilled workers by simplifying the tasks workers had to perform,” said Rynhart.

“Technological progress did not induce a long-term rise in unemployment as production increased drastically, allowing prices to fall and consumers to buy more goods and thus creating job growth in many sectors of the economy.

“That mass employment manufacturing model enabled hundreds of millions of workers in postwar Japan, Korea and more recently and most spectacularly in China to move first from farm to factory, and then from factory into higher value services jobs.”

This model has been copied by other economies as the development route out of poverty, Rynhart said. But it seems it is no longer the template it once was, which means countries that compete on low-wage labor need to reposition themselves.

“Price advantage is no longer enough,” he said. “Policymakers need to create a more conducive environment that leads to greater human capital investment, research and development, and high-value production. No easy thing.”