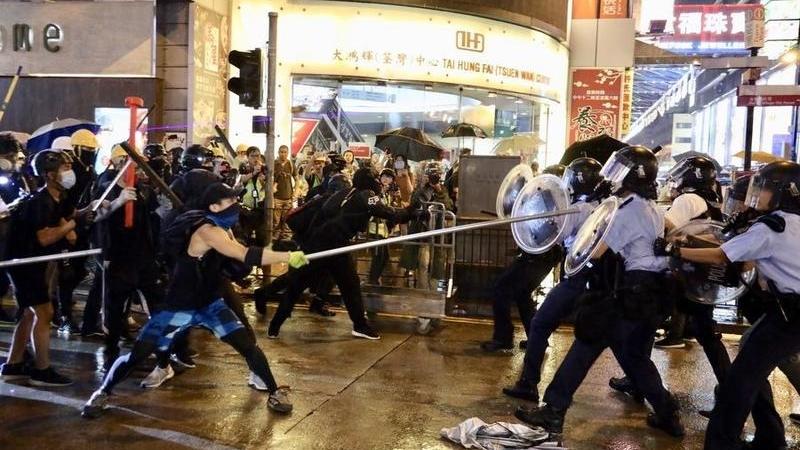 HONG KONG - When Ah Ho, 20, became a new constable of the Hong Kong Police Force in May, he did not expect that he and his colleagues would face a whole new level of danger, complexity and pressure on the job.

Officers said the level of aggression by demonstrators has been the highest in decades, but in addition to their challenging work, the police also need to deal with intense hostility

Hong Kong has since June suffered from prolonged and escalating violence that originated from demonstrations over proposed ordinance amendments concerning fugitive offenders.

Officers said the level of aggression by demonstrators has been the highest in decades, but in addition to their challenging work, the police also need to deal with intense hostility.

Ah Ho is among four officers who spoke to Xinhua about their experiences over the last three months. Their accounts shed light on the heavy pressure they have to endure, tricks of perpetrators to corner police, and the resolve of police to maintain law and order and fight street violence.

All officers declined to be named, citing worries over possible abuse of information.

Ah Ho was one of the many victims of cyberbullying against police. On social networking platform Instagram, Ah Ho had disagreements with his friends over whether the police's responsive law-enforcing activities were appropriate, only to find later that he was targeted and maliciously doxxed.

Within half a month, Ah Ho and his family received more than 3,900 harassment calls and were frequently abused verbally. His personal information and that of his family was illegally used to apply for loans, order takeaways, and hail taxis and Uber rides. 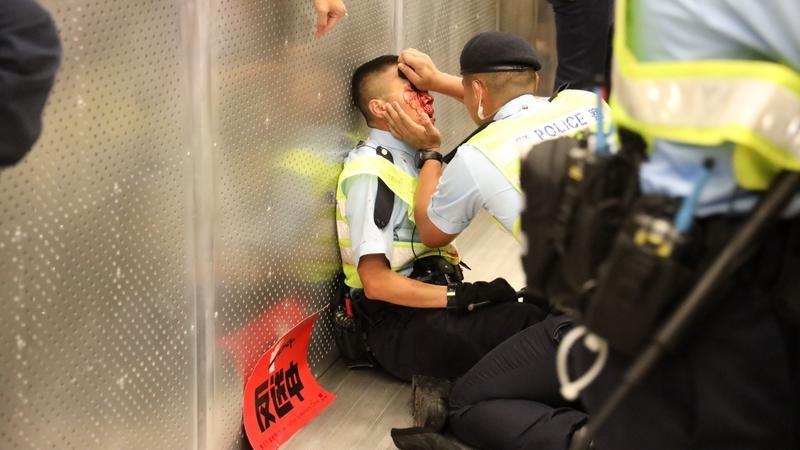 A police officer attends to an injured colleague as hundreds of masked protesters, demonstrating against the government’s proposed bill to amend the city’s extradition law, attack police officers with iron barriers outside the Legislative Council building in Admiralty, Hong Kong, in the early hours of June 10, 2019. (EDMOND TANG / CHINA DAILY)

To date, the personal data of more than 1,800 police officers and their next-of-kin have been disclosed online since June, including pictures and information about the schools and classes of their children, according to statistics by the Hong Kong police.

The Office of the Privacy Commissioner for Personal Data has transferred 608 doxxing cases to the police for further investigation, of which more than 70 percent were related to police officers.

Ah Ho, who serves in the patrol sub-unit in Kowloon West, said the malicious doxxing has greatly disturbed the lives of his family.

"But I will stay true to my heart. The reason why I chose to be a policeman remains unchanged, regardless of being doxxed or not," he said.

To help those affected officers, the welfare service group of the Hong Kong police has offered to change their living quarters and provide psychological counselling.

Ah Kit faced far more dangerous situations during his frontline law-enforcing operations in his fourth year as a policeman.

The 23-year-old constable from the police tactical unit tried hard to remain calm when he recalled a late night duty call that turned out to be an ambush. On Aug. 25, radical demonstrators illegally besieged the Kwai Chung police station in the New Territories.

Inside the police station, a telephone call came in to report that "a citizen" had been beaten by a number of violent demonstrators and needed help. Ah Kit's police squad was dispatched to mount a rescue operation.

The moment the officers stepped out, they were attacked by a large number of rioters with iron rods, corrosive liquids and bricks, objects that have been frequently used by rioters to attack police officers. 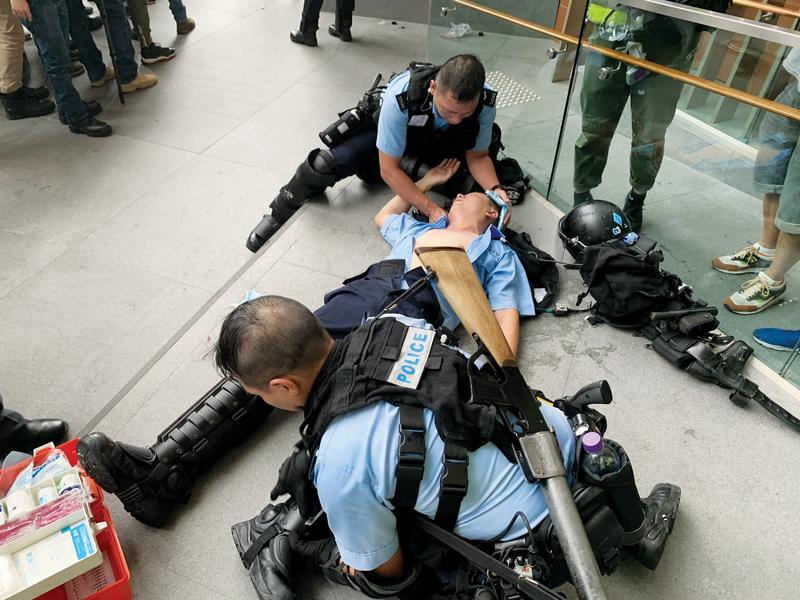 A Hong Kong police officer lies injured during a protest as other officers attend to him outside the Central Government Offices in Hong Kong on June 12, 2019. (ORANGE NEWS / FOR CHINA DAILY)

Caught off guard, Ah Kit and another colleague found themselves separated from eight other officers and greatly outnumbered by rioters. They were robbed of their helmets, beaten and kicked. They wielded their batons to defend themselves and retreated.

During the process, a "reporter" clad in a yellow vest offered to take Ah Kit and his colleague to where the so-called attack took place. They followed him around but found no trace of any attack that had taken place.

When they arrived at the Kwai Fong MTR station, officers were told by a local resident that the man in the yellow vest was a fake journalist. As they retreated to the Kwai Fong bus station, they met another squad which had also been dispatched over a fake call for help.

Together, they continued searching, but a mob began to attack their vehicle, smashing the car windows and assaulting the driver, who suffered serious stab wounds in the back.

Ah Kit and his colleagues escorted the injured officer for treatment. He had been pelted with eggs, his arms and feet injured by broken glass and corrosive liquids.

"A lot of the rioters were my age, but the bottom line is very clear -- if they break the law, whoever they are, I will arrest them, even if they are my friends," he said.

"I don't regret it because I'm a cop," he said. "It's my job to crack down on violence and protect the people. It's the right thing to do, and I will stick to it."

The public has expressed strong discontent over the rampant violence, said officer Chan who is in charge of community relations in Sham Shui Po District.

After some applied a demonstration in Sham Shui Po on Aug. 11, the police district received more than 600 letters in the name of institutions demanding a letter of objection.

"I believe the mainstream opinion in the community is to uphold law and order," Chan said, adding that he understands the silence of many members of the public for fear of revenge.

"But that doesn't mean they're endorsing violence," he said.

People also provided information to police about parking lots and warehouses used by rioters to allow the police to raid beforehand, Chan said.

Since Aug. 5, the district has suffered ten attacks by rioters. Radical demonstrators often assembled illegally in the neighborhoods and shouted slogans late at night.

"Many residents were unable to sleep well at night. Many stores in the district saw their sales plunge about 50 percent over the past two months," said Chan.

Officer Au has been serving in the police force for 21 years and handled the illegal "Occupy Central" movement in 2014. "But the illegal, violent activities this time are tougher to deal with," said Au, deputy commander of a regional response contingent.

A police officer suffers burns to his limbs after being attacked by a petrol bomb was hurled at him by protesters during an illegal assembly in Hong Kong, Aug 11, 2019. (PHOTO / CCTV)

Many police officers are also under huge pressure due to smear campaigns against them. Radicals spread rumors and adulterated photos on social media to smear police operations and accuse them of so-called "abuse of power," Au said.

On Aug 22, the Hong Kong police presented clear evidence of adulterated photos and videos of police reactions to demonstrations. A photo of an officer hitting non-demonstrators with his shield had been widely used as proof of police brutality. Video footage later revealed that the officer was holding his shield to escort passersby out of the danger zone.

As a regional response contingent's deputy commander, Au said he would make proper rotations and deploy tactics based on received intelligence to make sure every district has sufficient police personnel to deal with the surprise attacks. 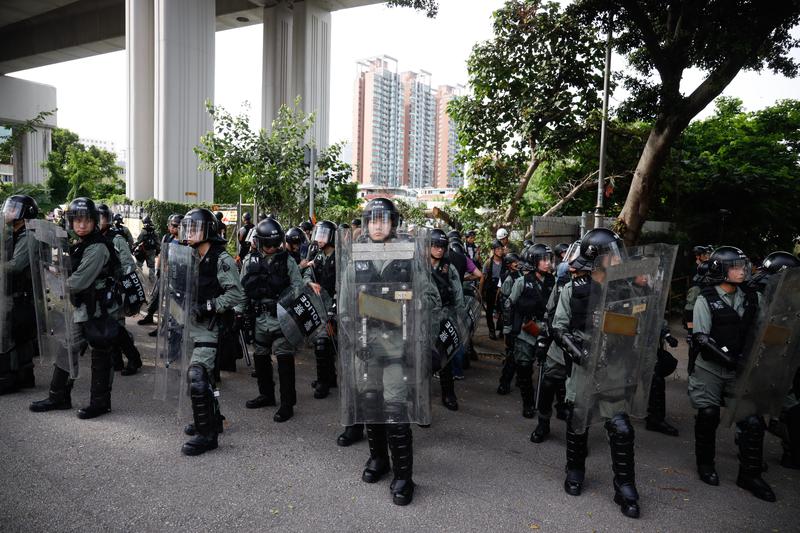 He reiterated that if demonstrators do not resort to violence, the police will not use force.

More than 200 police officers have been injured amid violence since early June, and 1,183 suspects have been arrested.

"Our morale is still high," Au said, "Without such morale, we couldn't have had handled so many emergency situations in such a short time."