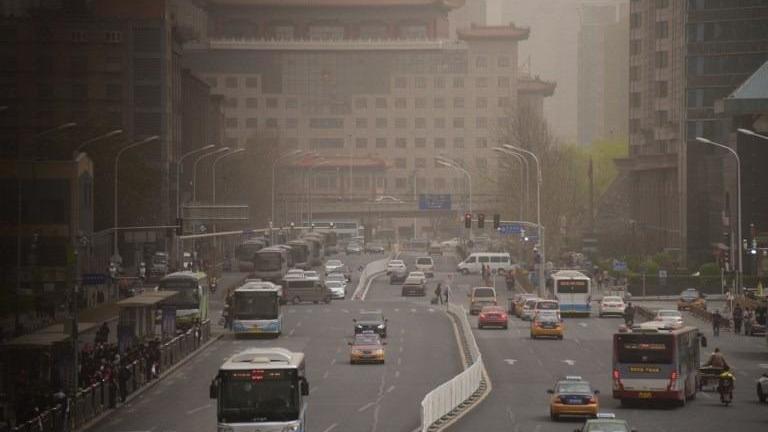 In this March 28, 2018 photo, vehicles commute along a road during unusually high levels of dust in Beijing, China. (WANG ZHAO / AFP)

Leading Party and government officials at the county, city and provincial levels across China will be held accountable if they fail to protect the local environment. They will be the first to be questioned if antipollution targets are not met, according to China's latest directive to toughen the fight against pollution.

Jointly issued by the central leadership and the State Council, the directive sets clear and detailed goals in fighting air, water and land pollution. It aims to target the problems that concern the public the most, said Xu Biwen, an official from the Ministry of Ecology and Environment's Environmental Supervision Office.

China aims to improve the overall environmental quality and ensure a significant decrease in pollutant emissions by 2020. By 2035, the country is expected to see its environment fundamentally improved after the industrial structure and people's lifestyle have become environmentally friendly, according to the directive published on Sunday.

By 2020, the percentage of days with moderate and good air quality in cities (prefecture-level and above) needs to reach 80 percent.

Also, the emission of sulfur dioxide and nitrogen oxides must be at least 15 percent lower than the level in 2015, it said. By 2020, the quality of 70 percent of surface water needs to be Grade I to III - the top three levels in China's five-tier water quality grading system. And, more than 90 percent of polluted farmland must be safe to use by then.

Toughening the fight against pollution in such a short period of time can be challenging and difficult, so it must be led by the Party, according to the directive.

Local governments are also required to draft annual action plans and report the results to the central government every year. Officials who fail to meet requirements and contribute to environmental damage will be put on record and subject to a lifelong accountability system.

"We will also enforce and better equip supervision teams at the grassroots level," he said.

"China is currently in the key period of building an ecological civilization. We feel the pressure because of people's increasing demand for a better ecological environment. Meanwhile, we have also reached the time that the country is capable of solving key environment protection problems," Xu said.

The country will try to ban importing solid waste for good by the end of 2020 to prevent further land pollution, it said.