EU calls for calm, warns US-Iran of conflict 'by accident' 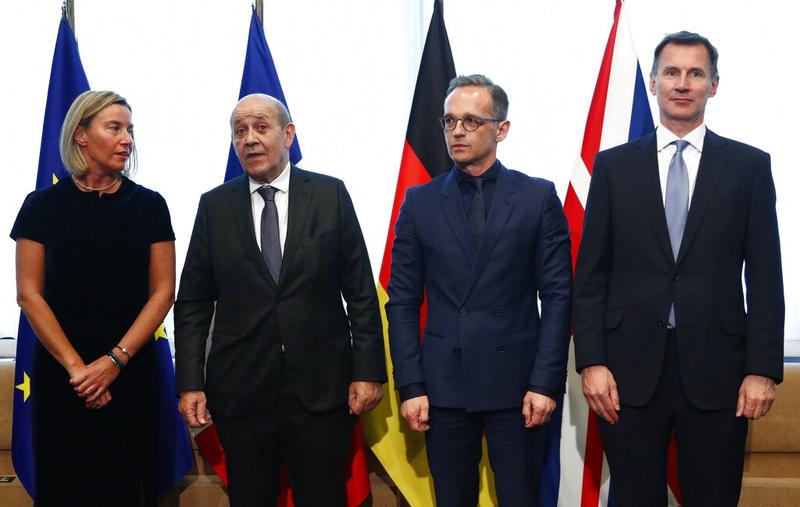 BRUSSELS — European foreign ministers urged the United States and Iran to show restraint Monday amid fears of tensions tipping them easily into armed conflict, while Secretary of State Mike Pompeo briefed his counterparts on the threats Washington sees emanating from the Islamic republic.

The foreign ministers of Britain, France and Germany, joined by the European Union's foreign policy chief, made the appeal after Saudi Arabia said two oil tankers were sabotaged Sunday off the coast of the United Arab Emirates, one as it was heading to pick up Saudi oil to take to the United States.

Washington has warned shipping companies that "Iran or its proxies" could be targeting maritime traffic in the Persian Gulf region and said it was deploying an aircraft carrier and B-52 bombers there to counter alleged threats from Tehran.

European countries that were co-signatories to a nuclear accord between Tehran and six world powers have been racing to salvage the deal since the US pulled out last year. The foreign ministers of Britain, France and Germany, parties to Iran agreement, and EU foreign policy chief Federica Mogherini, who supervises the way the 2015 agreement is enacted, met in Brussels on Monday.

"We are very worried about the risk of a conflict happening by accident, with an escalation that is unintended really on either side but ends with some kind of conflict," British Foreign Secretary Jeremy Hunt told reporters.

"What we need is a period of calm to make sure that everyone understands what the other side is thinking," Hunt said.

In withdrawing from the nuclear accord, the US said the agreement did nothing to stop Iran from developing missiles or destabilizing the Middle East. The Europeans insist the agreement was never meant to address those issues but has been effective in curbing Tehran's nuclear ambitions.

Tensions mounted last week, when Iranian President Hassan Rouhani gave the remaining signatories 60 days to come up with a plan to shield his country from sanctions imposed by US President Donald Trump after the US withdrew from the deal.

French Foreign Minister Jean-Yves Le Drian described the remarks suggesting that Iran might renege on the agreement as "very worrying," given that the EU is still respecting the deal and trying to keep financial supply lines open to Tehran to bolster its economy.

US Iran envoy Brian Hook told reporters traveling with Pompeo that in Brussels, the secretary of state "shared information and intelligence with allies" since "Europe shares our concerns about stability in the Gulf and the Middle East."

"The secretary wanted to share some detail behind what we have been saying publicly. We believe that Iran should try talks instead of threats. They have chosen poorly by focusing on threats," Hook said. 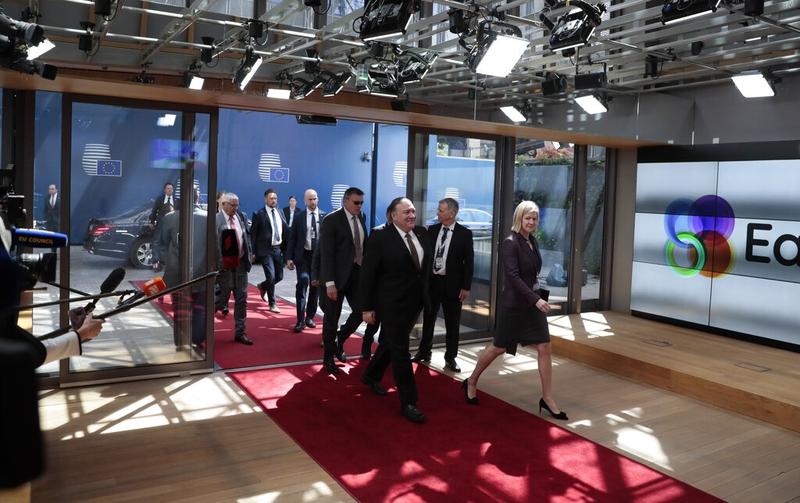 US Secretary of State Mike Pompeo, center, arrives for a meeting of the US and the E3 at the Europa building, May 13, 2019. (VIRGINIA MAYO / AP)

Mogherini said Pompeo "heard clearly" in Brussels that "we are living a crucial, delicate moment, where the most responsible attitude to take is, and we believe should be, that of maximum restraint and avoiding any escalation on a military side."

She and Hook said the reported attacks on the two tankers had been discussed, but neither linked the incidents to Iran.

"I don't see that there's a better one, or any proposals for a better agreement," Maas said. "That's why I think it's responsible to hold onto what one has and do everything to prevent the situation there from escalating further."

As the US sanctions bite, domestic pressure is increasing on Rouhani to demonstrate that Iran can still benefit from an agreement based on providing it with economic opportunities in exchange for limiting nuclear development.

Maas said the Europeans "are working on the assumption that Iran won't withdraw step by step from this treaty, but rather meet all of its commitments."

Despite the tensions, the Europeans insist only the International Atomic Energy Agency can judge whether Iran remains in compliance with the nuclear agreement.

Inspectors from the agency have issued more than a dozen reports showing Tehran has held up its end of the deal so far. A new report is due at the end of May.

Pompeo was due to travel Tuesday to Russia for talks with Russian Foreign Minister Sergey Lavrov in Sochi.