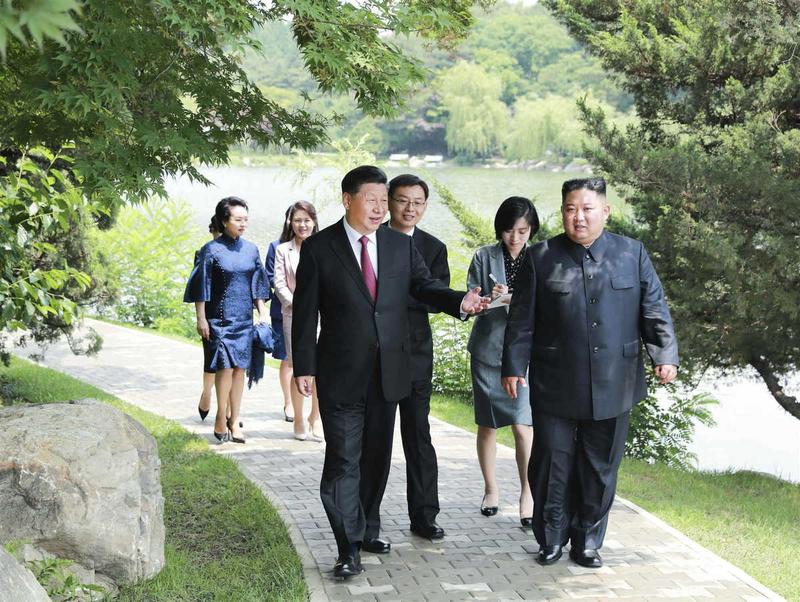 President Xi Jinping said on Friday that his visit to the Democratic People's Republic of Korea demonstrated the two countries' firm will to advance the political settlement of the Korean Peninsula issue and to promote lasting peace and security in the region.

No matter how the international situation changes, China will firmly support the DPRK's socialist cause, the country's new strategic line and its efforts to promote the political settlement of the peninsula issue and safeguard regional peace and stability, Xi said

Xi, also general secretary of the Communist Party of China Central Committee, made the remark while meeting with Kim Jong-un, chairman of the Workers' Party of Korea and chairman of the State Affairs Commission of the DPRK, in Pyongyang. Xi wrapped up his two-day state visit to the DPRK on Friday.

No matter how the international situation changes, China will firmly support the DPRK's socialist cause, the country's new strategic line and its efforts to promote the political settlement of the peninsula issue and safeguard regional peace and stability, Xi said.

On behalf of the Party, government and people of China, Xi expressed gratitude for the warm reception and thoughtful arrangements from the DPRK. The friendly and enthusiastic atmosphere throughout the visit has reflected the deep friendship between the two parties and two countries, Xi said.

Hailing the visit as a great success, Xi said that it has strengthened the traditional friendship between China and the DPRK, set the direction for the development of bilateral ties in the new period and demonstrated the two countries' firm determination to promote the political settlement of the peninsula issue and safeguard peace and stability of the region. 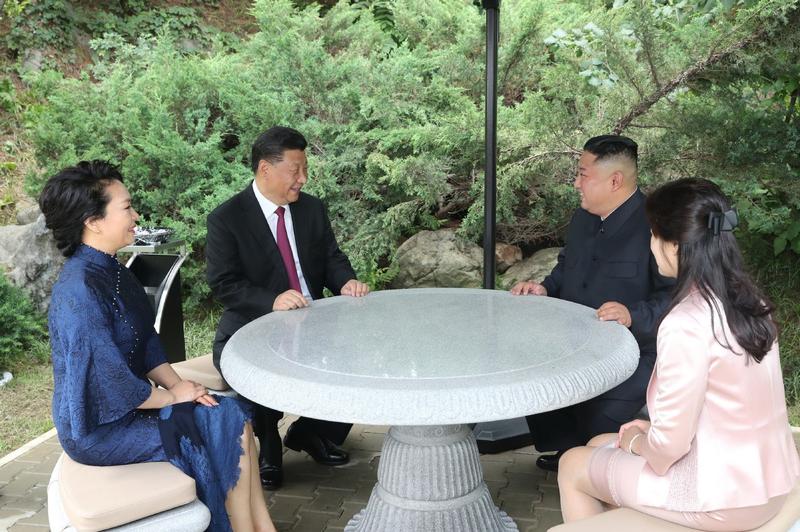 General Secretary of the Central Committee of the Communist Party of China (CPC) and Chinese President Xi Jinping and his wife Peng Liyuan talk with Kim Jong-un, chairman of the Workers' Party of Korea (WPK) and chairman of the State Affairs Commission of the Democratic People's Republic of Korea (DPRK), and his wife Ri Sol-ju at the state guest house in Pyongyang, capital of the DPRK, June 21, 2019. (XINHUA)

The visit took place in this important year, which marks the 70th anniversary of diplomatic relations. It is also the fifth meeting between the two leaders in the past 15 months, Xi said, adding that both are vivid demonstrations of the vitality of China-DPRK traditional friendship.

Xi called on the two countries to make joint efforts, implement the consensuses reached during the visit and turn the blueprint of China-DPRK relations into reality.

Kim expressed sincere gratitude for China's support for the DPRK people's socialist cause under the leadership of the Workers' Party of Korea. 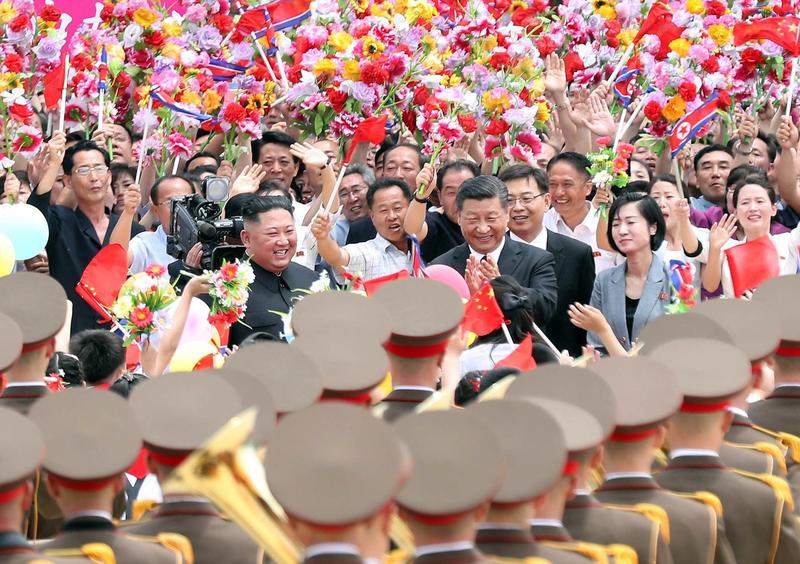 President Xi Jinping arrives in Pyongyang on June 20, 2019 for a state visit to the Democratic People's Republic of Korea－the first visit to the country by a Chinese leader in 14 years. Xi was warmly received by DPRK leader Kim Jong-un, starting with a grand welcoming ceremony at the airport. (LIU WEIBING/XINHUA)

DPRK-China friendship has a long history and solid foundation, Kim said, adding that the two countries act like a family with close interactions and friendly cooperation.

Kim said he would like to follow the will of the past generations of leaders, make joint efforts with Xi, inherit and develop DPRK-China relations at a new historic point and map out a bright future for DPRK-China friendship.

Xi's wife, Peng Liyuan, and Kim's wife, Ri Sol-ju, also attended the meeting. Before their departure, Xi and Peng attended a seeing-off ceremony held by Kim and Ri at the airport.

At a welcoming banquet held by Kim on Thursday evening, Xi said that Beijing is willing to join Pyongyang in opening up a bright future for bilateral ties, and lasting peace and common prosperity in the region. 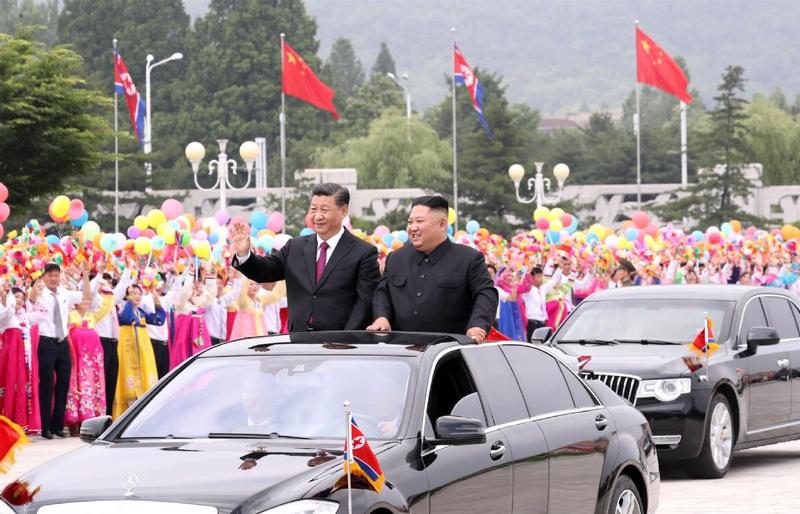 The two heads of state, President Xi Jinping and DPRK leader Kim Jong-un, ride in an open-top car from the airport to the square of the Kumsusan Palace of the Sun, which serves as a mausoleum for former supreme leaders of the country. Hundreds of thousands of local residents lined the streets to welcome Xi. (JU PENG/XINHUA)

Recalling the 70 years of the China-DPRK relationship, Xi hailed the traditional friendship as a shared, valuable asset forged and passed along by leaders of elder generations of both countries, saying that the friendship has remained strong and vigorous despite constant changes.

Xi's visit has turned a new and splendid page in the DPRK-China friendship, Kim said, adding that he and Xi had an in-depth exchange of views and reached important consensuses

The two countries have jointly drawn a plan for a bright future of bilateral ties and reached a streak of major consensuses, Xi said, adding that the two sides agreed that China and the DPRK need to unswervingly pass down their traditional friendship from generation to generation and continue writing new chapters of the times.

Beijing and Pyongyang also agreed that a political settlement of the nuclear issue in the Korean Peninsula is a popular aspiration and an inevitable trend, and that they need to continue to stick to peace talks so as to make even greater contributions to peace, stability and prosperity in the region and the wider world, Xi said.

Kim said that in their joint socialist construction endeavor, the DPRK and China have already formed a tradition of sharing weal and woe as well as supporting each other and cooperating.

The two leaders affirmed the socialist system as the core of maintaining the DPRK-China friendship during their four meetings in the past year, Kim said.

Xi's visit has turned a new and splendid page in the DPRK-China friendship, Kim said, adding that he and Xi had an in-depth exchange of views and reached important consensuses.

Following the banquet, Xi and Peng, accompanied by Kim and Ri, watched a large group performance featuring calisthenics and artistic displays at the May Day Stadium.