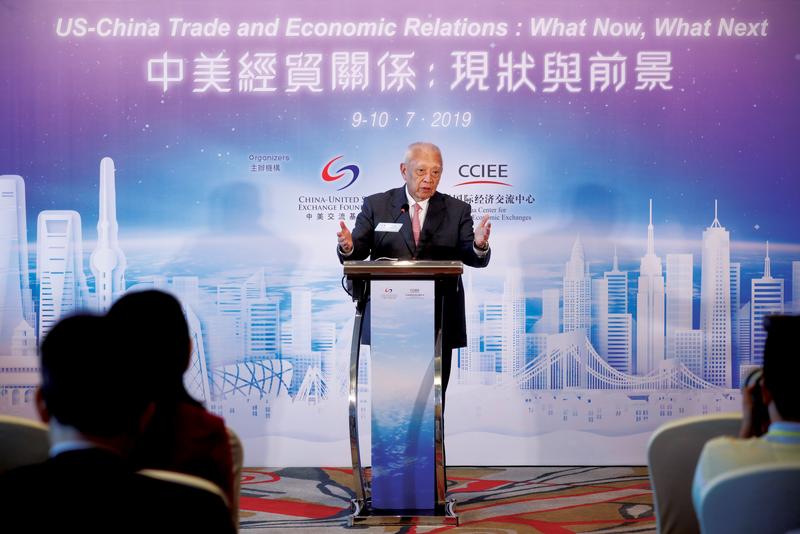 Tung Chee-hwa, vice-chairman of the Chinese People’s Political Consultative Conference National Committee, the nation’s top political advisory body, is optimistic about the outcome of the Sino-US trade negotiations that are expected to resume following last month’s meeting in Osaka between President Xi Jinping and US President Donald Trump.

Zhu Guangyao, a former vice-minister at the Ministry of Finance, said China is not only a participant, developer and contributor in the international economic system and order, but also a beneficiary

Tung, former chief executive of the Hong Kong Special Administrative Region, said both countries should be optimistic even if there’s a deficit as the gap would fade away with the world’s two largest economies being “increasingly complementary” to each other.

Speaking at the forum themed “US-China Trade and Economic Relations: What Now, What Next” in Hong Kong on Wednesday, Tung pointed out that China is already the world’s largest purchaser of US agricultural products, oil and gas, while the US is the largest supplier.

“They all have a match there,” Tung said.

The former chief executive, who also heads the China-United States Exchange Foundation, one of the co-organizers of the forum, said the seminar is a “constructive” meeting and a “very good attempt” to highlight the challenges ahead and which could help advance Sino-US relations.

“It can help chart what both sides need to do in the days and months to come,” said Tung. “How we can work together, how we can live together will determine the future of almost everyone of us.”

Tung’s views echoed those of Wei Jianguo, vice-chairman of the China Center for International Economic Exchanges, who spoke highly of the significance of the two-day seminar, and lamented the lack of sufficient communication for Sino-US distrust.

Against the backdrop of a global economic slowdown, Wei urged China and the US to join hands in creating a new way of collaboration, and making a “bigger cake” to drive economic development on a global scale.

Wei said, Texas, one of the largest energy supplier states in the southern US, has shown a strong willingness to sign a long-term energy agreement with China.

He said this is a brand new direction that both countries should take in energy collaboration. It’s a sign that the momentum to change the status quo not only comes top-down, but also bottom-up.

Zhu Guangyao, a former vice-minister at the Ministry of Finance, said China is not only a participant, developer and contributor in the international economic system and order, but also a beneficiary.

The high-level of opening-up shown by China during the recent G20 summit in Osaka is another sign the Chinese economy is integrating with the rest of the world more closely, he said.