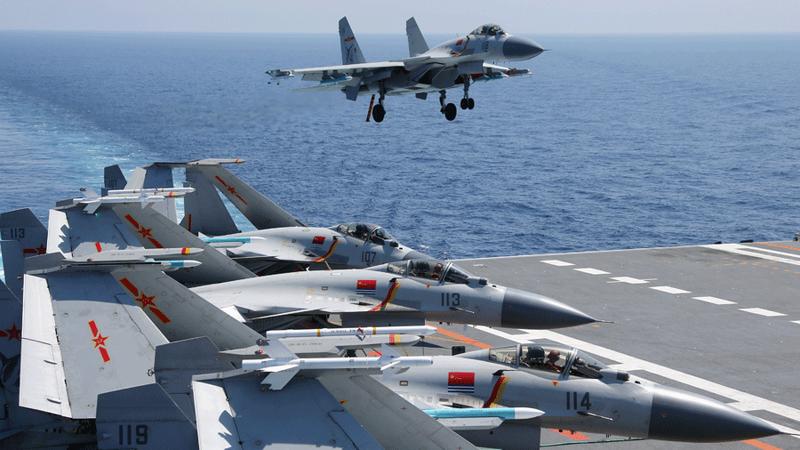 In this undated photo, a ship-borne J-15 fighter jet prepares to land at the flight deck of the aircraft carrier Liaoning. (PHOTO / MINISTRY OF NATIONAL DEFENSE OF THE PEOPLE'S REPUBLIC OF CHINA)

China's latest trainer aircraft, delivered recently to the People's Liberation Army Navy, is expected to help improve the training of pilots based on aircraft carriers.

The PLA Navy said in a statement last week that its Naval Aviation University in Shandong province had held a commissioning ceremony for a new type of trainer jet at an unidentified naval airport along the Bohai Sea.

Rear Admiral Wang Jundong, political commissar of the university, was quoted in the statement as saying at the ceremony that the service of the new trainer jet will complement the university's trainer fleet and enable pilots to get more realistic experience for air combat.

Though the statement did not identify the new aircraft, pictures published by the university showed that it is a Hongdu Aviation Industry L-15 advanced trainer jet. At least 12 L-15s were delivered at the ceremony.

According to AVIC, a leading aircraft maker in the country, the domestically developed L-15 has two engines, a streamlined aerodynamic design and integrated avionics.

The L-15 has two types - one for advanced jet training and the other for lead-in fighter training, the State-owned defense giant said.

Trainer jets for advanced application teach student pilots how to operate supersonic aircraft and how to carry out sophisticated aerial maneuvers, while those for lead-in fighter training are enhanced versions of advanced jet models and focus on familiarizing trainees with combat maneuvers and skills.

Before the L-15, the PLA Navy lacked a third-generation trainer aircraft, so it had to rely on its second-generation JJ-7 trainer jet and that aircraft's upgraded version, the JL-9, to conduct advanced training for student pilots.

Currently, a Navy flight student will fly the CJ-6 pistonengine basic trainer, followed by the JL-8 intermediate trainer jet. When pilots begin the advanced training stage, both the JJ-7 and JL-9 will be used to simulate real fighter aircraft.

Wang Ya'nan, editor-in-chief of Aerospace Knowledge magazine, said the use of the L-15 will help shorten the time required for Navy aviators' training before they become qualified to operate modern fighter jets. The trainer jet will be especially useful for carrier-based pilots, Wang said.

"The L-15 has advanced design and equipment, and its capabilities are very close to those of a genuine fighter jet. Compared with its predecessors, it is more suitable for carrier-based pilots' flight training," Wang said.