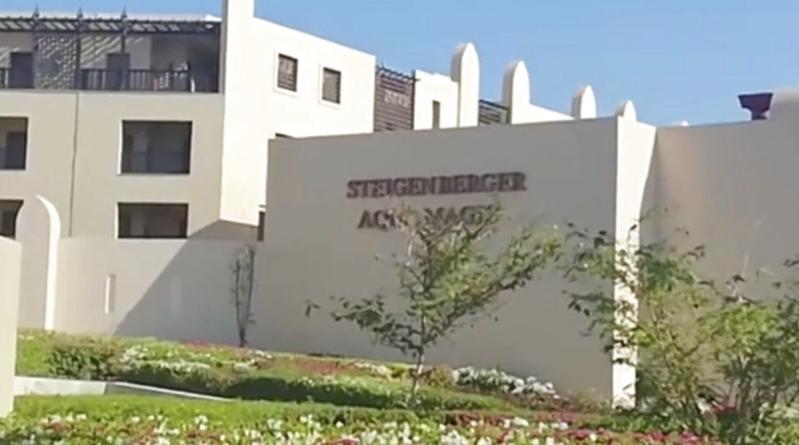 This Aug 24, 2018 photo taken from video shows the exterior of the Steigenberger Aqua Magic Hotel in Hurghada, Egypt. (APTN)

LONDON/CAIRO - Britain’s Thomas Cook said it was evacuating all 301 of its customers from a hotel in Egypt’s popular Red Sea resort of Hurghada as a precautionary measure after two of its holidaymakers died in circumstances it said were still unclear.

Local officials said on Friday both deaths were from heart failure.

John Cooper, 69, and his wife Susan Cooper, a 63-year old who worked for the holiday company in Britain, were staying at the Steigenberger Aqua Magic Hotel and died within hours of each other on Tuesday.

Thomas Cook said it had received further reports of illness among guests at the hotel, without elaborating.

Safety is always our first priority, so as a precautionary measure we have taken a decision to remove all our customers from this hotel

“Safety is always our first priority, so as a precautionary measure we have taken a decision to remove all our customers from this hotel,” the company said.

The hotel said there had not been a rise in cases of illness.

The incident comes as Egypt is trying to revive tourism, a crucial source of income, while the economy is still struggling from the years of turmoil that followed a 2011 popular uprising.

A statement from the Red Sea provincial governor’s office, entitled “normal death of an English old man and his wife”, said both had died of heart failure.

John Cooper suffered a “circulatory collapse” and died at the hotel. Susan Cooper was taken to hospital after fainting and died there, it said.

The couple’s daughter Kelly Ormerod, who was on the same holiday along with her three children, said the cause of death had not been established.

“Mum and Dad were fit and healthy, they had no known health problems,” she said in a statement to British local radio station 2BR. “We have no cause of death, a post-mortem is underway.

The general manager of the Aqua Magic, which is a franchise of Frankfurt-based Deutsche Hospitality, said the hotel was deeply saddened.

“The doctor’s preliminary report indicates that death was due to natural causes,” Dieter Geiger said in a statement. “There are no indications to support allegations of an increased incidence of illness at the hotel.”

Thomas Cook said it would offer customers alternative hotels in the resort or the option to fly back to Britain later on Friday.

The company said it had last audited the hotel in late July and it had received an overall score of 96 percent.

A spokeswoman for the British Foreign Office said: “We continue to support the family of a couple who died in Hurghada. Anyone staying at the Steigenberger Aqua Magic Hotel should follow the advice of their tour operator and the local authorities.”

After the bombing of a Russian passenger jet flying from Sharm el-Sheikh in the Sinai Peninsula in 2015, Egypt-bound flights from Russia were halted for more than two years, hurting Egyptian tourism revenues.

Revenues have improved in recent months, however, jumping 83 percent in the first quarter of 2018 to US$2.2 billion.

Red Sea resorts such as Hurghada and Sharm el-Sheikh are among the most popular among European and other holidaymakers.