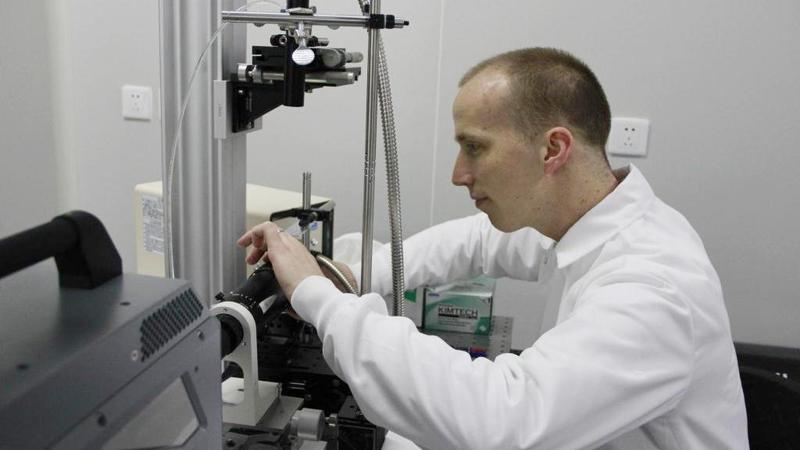 Marie-Jean Thoraval, a French professor at the Xi’an Jiaotong University, works in the lab. (PHOTO PROVIDED TO CHINA DAILY)

Marie-Jean Thoraval, a French professor with the School of Aerospace at Xi'an Jiaotong University, became the first foreign teacher to recently be selected for the educational institution's 10 Young Scholars of Distinction award.

"I am honored and grateful to have been selected for this award," says Thoraval, 33, who adds that it reflects the strong support for him shown by the university.

Since he joined the university in September 2015, he has been researching experimental and numerical fluid mechanics, especially relating to the splashing of liquid, and the dynamics of rising bubbles in complex geometries.

His research has important implications for combustion, 3-D printing, spray coating, crop fertilization, medicine production and wastewater treatment. His interest in the subject rose after he used a high-speed camera to test drops and bubbles during his postgraduate research internship program at the National University of Singapore in 2007.

After that, for further research on fluid mechanics, he decided to pursue a doctor's degree at the King Abdullah University of Science and Technology in Saudi Arabia.

Liu Zishun, the executive director of the International Center for Applied Mechanics at Xi'an Jiaotong University, was on the panel that interviewed Thoraval for the job. "Thoraval integrated into a new environment quickly and worked very well with our team," says Liu.

Over the past two years in the Xi'an university, Thoraval has helped to improve laboratory infrastructure, build up a research group and push international academic cooperation.

Supported by the university and its International Center for Applied Mechanics, Thoraval has constructed a 70-square-meter state-of-the-art laboratory, with facilities such as the latest high-speed cameras.

In 2016, he joined the Young Thousand Talents program initiated by the Chinese government to recruit young scientists from overseas and mentored doctoral candidates at Xi'an Jiaotong University.

Abderrahmane Kherbeche from Morocco is among three postdoctoral fellows on Thoraval's team today.

"Professor Thoraval is one of the most experienced scientists in high-speed imaging. He has worked previously with many leading experts in the field through international collaboration," says Kherbeche.

"The research group supervised by him has some researchers who are adept at experimental and numerical fluid mechanics, as well as motivated master's and bachelor's students. That's why I chose to join the team."

He says to cultivate students is about developing both their academic abilities and values.

"I find that he is glad to solve any problem in our studies or life on campus," says Zhao Weiwei, a postgraduate student on his research group. "He encouraged me to surmount language barriers and have more exchanges with foreign scholars."

Thoraval loves his work at the university. "With many colleagues having international research experience, and opportunities for international exchanges, working in China is really being part of one of the most dynamic and exciting research environments in the world."

Lu Hongyan contributed to the story.