No trace of police brutality on July 14

Editor’s note: “Scarlet Pete” is a pseudonym for a China Daily photographer who covered the Sunday protest in Sha Tin. 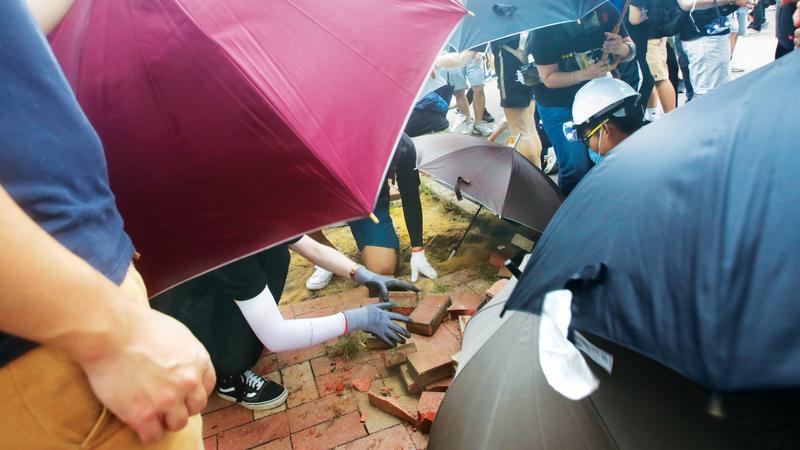 Protesters prying bricks from the pavement use umbrellas to prevent reporters from covering their behavior. (SCARLET PETE / CHINA DAILY)

HONG KONG-Life as a press photographer is never easy. But never have I been so worried about my safety as on the day I covered the violent protest in Sha Tin on Sunday.

As I was snapping away in the melee when hundreds of masked protesters clashed with the police on the streets, bricks thrown by the rioters were flying all over the place. A brick landed just a few feet from where I stood.

In the heat of action, I didn’t feel scared. Only when I was thinking back of what happened that night, a cold sweat broke out. I realized that I was so close to getting hit by the brick on the head.

The demonstration that day started off on a peaceful note. It was almost like taking shots of a walk in the park. But about 5:00 pm, the demonstration turned ugly. Huge crowds of protesters, young and energetic, spilled out of the designated routes and swarmed into Yuen Wo Road outside New Town Plaza.

I also covered the “Occupy Central” movement in 2014. But things were different this time. The protesters were much better-prepared and organized for a fight with the police.

While one group was building the barricade, others were passing umbrellas, helmets, goggles and plastic wrappers to those on the front line. There was also a stockpile of weapons, including bricks pried from the sidewalks.

We were blocked from taking pictures of their preparation. Every time I tried to step forward and take a photo of what they were doing, the protesters would try to stop me, with the disclaimer: No photos.

But when the police tried to disperse them, the protesters immediately called on us to take pictures of “police brutality”.

As a reporter on duty, I always tell myself to stay neutral and record faithfully what’s unfolding before my eyes. But that did not seem to fly with these protesters, who appeared more inclined to manipulate the press and edit out goings-on that were not to their advantage.

Things took a turn for the worse when hundreds of protesters swarmed into New Town Plaza, a large shopping mall, where they threw water bottles from upper floors to make the floors slippery to inhibit the police officers who were trying to flush them out. Officers who slipped and fell were soon surrounded and attacked. One officer was seen kicked repeatedly on the head.

The next day, I turned on the TV and saw some politicians accuse officers of police brutality, which must have escaped my eyes should their claims be true. As a reporter trained to cover various events, I didn’t see anything that resembles excessive force on the police’s side. Instead, I felt threatened by the protesters.

I know, from day one, that journalism requires occasional covering of controversial and even dangerous events, and I am used to wrestling with fellow photographers for a better vantage point. But what I saw in Sha Tin on Sunday went beyond my expectation of what working as a journalist in Hong Kong, one of the world’s “safest cities”, entails.

Such protests are becoming a weekly routine. There is one planned for this Sunday. I truly hope journalists duly covering such events don’t have to dress like Ironman to keep themselves safe.