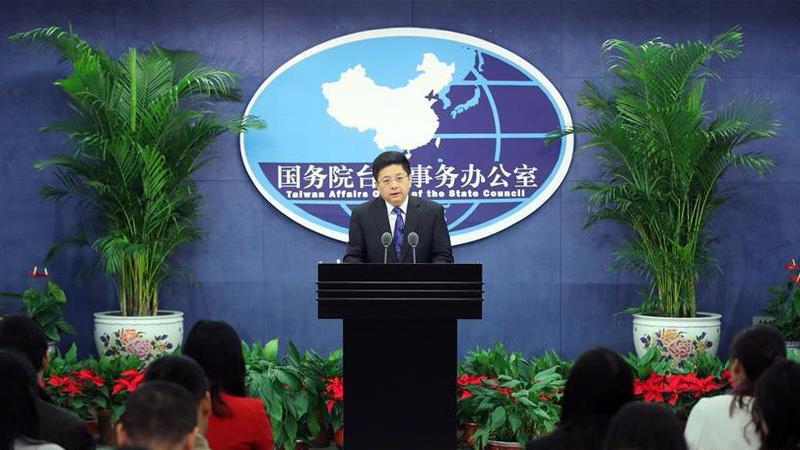 In this Nov 30, 2016 photo, Ma Xiaoguang, spokesperson for the Taiwan Affairs Office of the State Council, speaks at a regular press conference in Beijing, China. Ma said on Jan 31, 2018 that anyone who commits the crime of undermining national security will receive punishment. (CAI YANG / XINHUA)

BEIJING – A Chinese mainland spokesperson said Wednesday that any attempt to separate Taiwan from China will not be tolerated.

Ma Xiaoguang, spokesperson for the Taiwan Affairs Office of the State Council, made the remarks in response to a question on Taiwan leader Tsai Ing-wen's recent comments in an interview.

Taiwan should be fully responsible for the complex and grave situation in cross-Straits relations.

Tsai said that no-one could exclude the possibility that the Chinese mainland would resort to using arms against Taiwan.

"Since Tsai assumed office in May 2016, the Democratic Progressive Party (DPP) has refused to adhere to the 1992 Consensus, and unilaterally undermined the political basis of peaceful development of cross-Strait relations," Ma said.

The DPP has been obstructing cross-Straits communication and cooperation, cracking down on and persecuting organizations and individuals that support the development of cross-Straits relations and peaceful reunification, Ma said.

"Taiwan should be fully responsible for the complex and grave situation in cross-Straits relations," he said.

"In face of greater risks and challenges in cross-Straits relations, we are fully confident in our capability to promote the development of our relations by upholding peaceful reunification and the 'one country, two systems' principle," Ma said.

He also noted that the peaceful development of cross-Strait relations had changed dramatically and the interests of Taiwanese compatriots had been damaged since the DPP took power in 2016.

"The DPP administration has discriminated against Taiwanese compatriots' spouses from the mainland, and infringed their rights and interests, which is inhuman," the spokesperson said.

He urged Taiwan to uphold the one-China principle and consult with the mainland before participating in activities held by international organizations.

Taiwan participated in the World Health Assembly for eight consecutive years from 2009 to 2016 when both sides recognized the 1992 Consensus and opposed "Taiwan independence."

While talking about a Taiwan-related military spying case, the spokesperson stressed that anyone who commits the crime of undermining national security would receive punishment.

Two suspects from east China's Jiangsu Province have been charged with spying for Taiwan, a local procurator said earlier this week. The two were indicted by the Suzhou City Procuratorate, said Ma.

While answering another question about Taiwanese convict Lee Ming-che meeting his family, the spokesperson said the prison would handle the issue after receiving the application.

"As far as I know, the prison has not been informed of the details of a trip by Lee's family," Ma said.

Lee was sentenced to five years in prison for "subverting state power" by a court in Hunan Province last year.

Ma also denounced Taiwan's obstructing additional holiday flights across the Taiwan Straits, saying it was a grave deviation from the humanitarian needs of millions of families and tourists.

"The unreasonable practice of the Taiwan authority impairs trips of tens of thousands of tourists, the get-together of many families, and the feelings of compatriots across the Strait," said the spokesperson.

The decision is expected to make it difficult for around 50,000 people to return home during the holiday. Additional cross-Strait flights for the festival have been a regular practice since 2008 when direct flights between the two sides began.

"The Taiwan authority linked two totally irrelevant issues together and penalized Taiwanese living on the mainland," said Ma said. "It has gone to the length of taking residents and business people from Taiwan as hostages in retaliation against mainland airlines."

"Such a move has seriously compromised the welfare of people on both sides, particularly Taiwanese people," Ma said, stressing that the air route and those connected to it were safe.