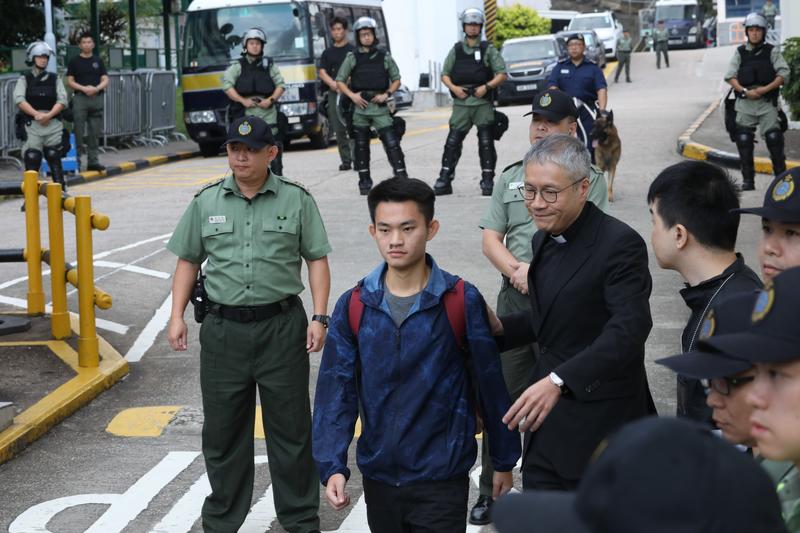 Murder suspect Chan Tong-kai, whose case helped ignite months of protests in the city, has been released from Pik Uk Prison in Hong Kong on Wednesday. (PHOTO / CHINA DAILY)

The Hong Kong Special Administrative Region government slammed Taiwan authorities for “irresponsible” handling of the voluntary surrender of Chan Tong-kai, 20, a Hong Kong resident and a suspect in a murder in Taiwan, whose case helped fuel months of social unrest in Hong Kong.

Taiwan authorities should bear all responsibility if justice cannot be served because they set up hurdles and restrictions to obstruct Chan’s surrender, Lee added, accusing Taiwan authorities of shifting the blame to Hong Kong and acting on political motives.

Also Wednesday, Lee announced the official withdrawal of the proposed extradition bill, which has sparked months of anti-government protests. Chan’s case had been cited by the SAR government as the primary reason for the amendment, a move to plug loopholes in the city’s extradition laws.

Chan is a suspect in the killing of his pregnant girlfriend, Poon Hiu-wing, in Taiwan in February last year. He was arrested by Hong Kong police after fleeing to the city, and was convicted of money laundering for stealing from his late girlfriend’s bank accounts. During the investigation, police said, he confessed that he killed Poon.

Taiwan authorities issued a warrant for Chan and asked the Hong Kong government to surrender the fugitive.

On Friday, Hong Kong Chief Executive Carrie Lam Cheng Yuet-ngor received a letter from Chan expressing his willingness to turn himself in to Taiwan authorities to face murder charges.

Taiwan previously had rejected accepting Chan’s surrender, instead insisting first on the signing of a mutual legal assistance framework with the SAR, while asking Hong Kong to provide any evidence it had in the case.

In a surprising U-turn on Tuesday, Taiwan’s mainland affairs council proposed having their law enforcement officers escort Chan back to Taiwan.

On Wednesday, Taiwan leader Tsai Ing-wen blamed Hong Kong for being “reluctant to exercise their jurisdictional power to bring justice to the victim’s family”. She said that Chan could not just get on a plane and turn himself in once in Taiwan, but would have to be arrested in Hong Kong.

HKSAR Secretary for Justice Teresa Cheng Yeuk-wah said she firmly rejected Tsai’s allegations, adding that Hong Kong’s Department of Justice does not have the legal basis to charge Chan with murder or to detain him.

“Taiwan has jurisdiction over this case, as the murder case occurred in Taiwan, with almost all evidence in Taiwan,” she said, referring to Hong Kong’s territorial principle. The principle is part of international law under which governments can prosecute crime within their borders but are prevented from exercising jurisdiction beyond their borders.

The SAR said that Taiwan officers have no power to enforce laws in Hong Kong.

On Tuesday, Tam Yiu-chung, Hong Kong’s sole representative to the Standing Committee of the National People’s Congress, said Taiwan’s request put politics over justice. He called it a tactic to be wielded during the 2020 election in Taiwan.

On Wednesday morning, Chan walked out of the prison after serving 18 months in prison for money laundering and apologized to the victim’s family. He also pleaded with Hong Kong residents for forgiveness, since his case was a spark for months of anti-government protests.