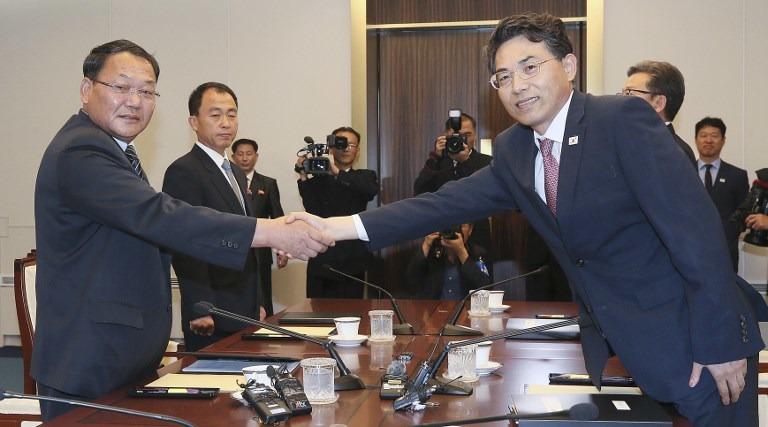 This handout photo taken and released by the ROK's Unification Ministry on June 26, 2018 shows ROK's chief delegate Vice Transport Minister Kim Jeong-ryeol (right) shaking hands with his DPRK counterpart Vice Railroad Minister Kim Yun-hyok (left) during their meeting at the south side of the truce village of Panmunjom in the Demilitarized zone (DMZ). (THE REPUBLIC OF KOREA'S UNIFICATION MINISTRY / AFP)

SEOUL – The Republic of Korea (ROK)'s unification ministry said on Friday that the country's economic cooperation with the Democratic People's Republic of Korea (DPRK) would be possible under the ongoing denuclearization process and improved inter-Korean relations.

For the inter-Korean economic projects, conditions should be met, such as a progress in denuclearization talks and the eased sanctions on the DPRK, the ROK's unification ministry said

The report said the ROK will drive the virtuous cycle by helping the DPRK and the United States hold a second summit and encouraging the second Pyongyang-Washington summit to go smoothly.

Through the development of inter-Korean relations, the ROK will make continued efforts to encourage the DPRK to help denuclearize the peninsula, according to the report.

For the inter-Korean economic projects, conditions should be met, such as a progress in denuclearization talks and the eased sanctions on the DPRK, the ministry said.

The ministry of trade, industry and energy said in a separate report to the parliamentary committee that it will push for a broad range of inter-Korean economic cooperation in industry, national resources and energy if conditions are met such as the denuclearization and the lifting of sanctions on Pyongyang.

The ministry said the effective inter-Korean economic cooperation will be pushed for following the easing or lifting of sanctions on the DPRK in the process of the denuclearization, but it noted that it will make steady preparations in advance for a smooth cooperation when the conditions are met.