HK govt has set up a Women’s Commission for gender equality. It lacks teeth. Is it men’s attitudes that should change? Shadow Li does a reality check.

Although the Family Status Discrimination Ordinance introduced in Hong Kong in 1997 guarantees equal right to employment irrespective of gender, female employees often come up against the proverbial glass ceiling.

Professor Fanny Cheung Mui-ching, first female vice-chancellor of the Chinese University of Hong Kong (CUHK), a women’s studies researcher, acknowledges that while employers may not explicitly discriminate against female recruitment, in practice, a negative bias operates. Women’s child-rearing and homemaker responsibilities work against them in the job market.

Cheung said while the male-female ratio in the top tier of civil service posts was still far from satisfactory in most countries, in Hong Kong it was below the world average. That pattern is also reflected in the business sector. However, the number of women in the middle ranks of government and business sectors is increasing.

A 2012 report on women in the workplace by Mckinsey & Co.showed the percentage of women professionals dropped from 52 at entry-level to 23 at mid-to-senior-management stage, to only 2 percent in CEO positions in Hong Kong. Singapore, Malaysia and Indonesia data showed women holding 8, 5 and 5 percent of CEO jobs respectively.

“It’s a leaking pipeline,” says Cheung. Be it the private or the public sector, the number of women keeps decreasing up the hierarchy. Unmarried women outnumber their married counterparts among those who make it to the top, she adds.

Comparing working women in Asian countries to those in Europe, Mckinsey indicated that lack of pro-family public policies, or support services for working mothers, were among the five major reasons that inhibited women building careers in Asia.

HK government data in 2015 shows 40 percent women withdrew from the job market for household duties, while only 2 percent of men did the same. Around 60 percent of married women between 20 and 39 held a job, 30 percent less than their unmarried counterparts.

According to a recent study by Oxfam Hong Kong, 614,100 women live under the poverty line in this city. If you’re a woman living in poverty in Hong Kong, chances are you will live quite long. Apparently, not having the means to support a decent life does not reduce one’s life span here. While the city’s women have the longest life expectancy in the world with average age reaching 87.3, more than one in six (17.4 percent) lives in poverty.

Women outnumber men in Hong Kong. However, their presence in the job market has always been less than that of men. To redress the reducing working force, the HK government has been encouraging more women to join the work force in recent years, as part of a drive to address the pressing issue of an aging society. 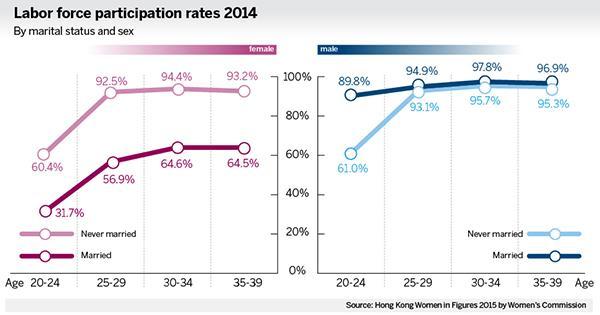 The Census & Statistic Department’s data reveals women continue to be paid much less than men. In the professional and business services in 2015, the average female pay was about HK$12,000 a month, while men drew HK$18,000. The only sector where the gender gap was equal was in real estate, with both averaging HK$9,000 a month.

Law Chi-kwong, associate professor in the Department of Social Work &Administration of the University of Hong Kong (HKU), said that the income gap between women and men is mainly caused by the gap in the work hours they put in and in terms of experience.

Law is also a member of the government’s Commission on Poverty and is chairperson of the Community Care Fund Task Force. 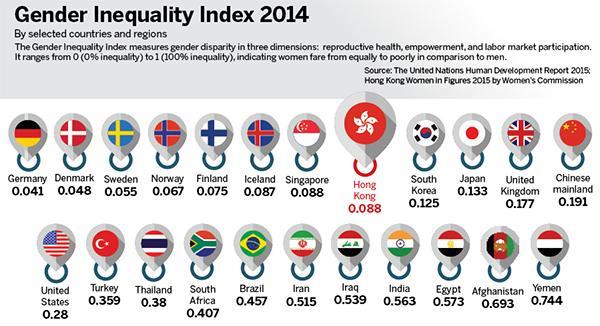 Between 2001 and 2015, while 17,400 people rose above the government defined poverty line, 18,900 women fell below it. Oxfam program head Kalina Tsang Ka-wai says women are taking up low-paid, part-time and non-skilled jobs as they need to work flexible hours to be able to attend to family obligations.

The Hong Kong Employment Ordinance requires people to be employed for at least 18 hours a week on four consecutive weeks, by the same employer, to be able to claim employee benefits. Many part-time working mothers – a quarter of the women who have joined the workforce since 2011 to be exact — are missing out on these perks.

Professor Law said working part-time helps but not much towards alleviating poverty. Single parenthood is a major cause of poverty among women, said Law, adding that single mothers outnumber single fathers in the city.

Although the number of housewives not having a salaried job has dropped from 744,600 in 2001 to 622,400in 2015, they still account for 19.4 percent of the women population in the city. Excluded from the Mandatory Provident Fund (MPF) system that covers salaried people, these women, when they turn 65, receive a monthly HK$2495 old age allowance. Should they need such support, they would also be eligible to get monthly allowance from the Comprehensive Social Security Assistance (CSSA) for a basic living. At 70 they become entitled to HK$1290 “fruit money” per month.

In countries such as Canada and Sweden a married woman is allowed to share the pension credits of her spouse. In the US and Japan, the spouse of an insured worker too would draw a pension, based on the worker’s contribution, in old age.

Local think tank, Bauhinia Foundation Research Centre, suggested the government set up a match fund to encourage people to make MPF contributionsto be credited to their homemaker spouse. The matching ratio will gradually be reduced as the income of the household grows. Law of the HKU seconded the idea of making MPF contributions on behalf of an unemployed spouse. At present there is no such provision in Hong Kong.

In 2001 Hong Kong government set up the Women’s Commission, to evolvea long-term vision and strategy. It would also review government policies related to women and make recommendations.

The government also rolled out a massive “gender mainstreaming” campaign, in 2002, to promote greater awareness about women’s issues.

However, Linda To Kit-lai, executive director of HER Fund, an NGO promoting women’s rights, said the Commission answered directly to the Labour and Welfare Bureau, and hence had little influence on policy-making since their recommendations were not binding.

The Nordic nations which consistently emerge on top of the United Nation’s gender empowerment ranking usually have a centralized authority – like the Ministry of Integration & Gender Equality in Sweden and Minister for Social Affairs & Health in Finland – which protect women’s interests by collaborating with different government departments.

Professor Fanny Cheung sees this as a serious limitation. A former member of the Women’s Commission from 2001 to 2005 and the first chairperson of the Hong Kong Equal Opportunities Commission in 1996, Cheung had proposed a centralized authority to work with government departments towards women’s welfare.

“Though Hong Kong government pushed for the ‘gender mainstreaming’ campaign, its implementation didn’t come through owing to lack of impetus,” said Cheung.While the government seems keen for women to re-enter the workforce, pro-active measures to help married women acquire skills needed in the job market, are missing.

Research released by the Association for the Advancement of Feminism (AAF) in 2015 shows the funds received by the districts is mostly spent on cultural and leisure activities. Vocational training for women does not figure on the agenda of district administrative authorities.

In order to stretch a network in all levels to promote gender equality, the government designated a post called Gender Focal Point (GFP) in the government departments, district councils and NGOs. But AAF release notes that the GFP failed to build up a network as it was expected owing to little communication. The Women’s Commission has not actively met those GFPs while there were no regular meetings of GFPs as well.

Apart from having a centralized authority to oversee women’s interests, supplementary policies in tax deduction and more pro-family policies at work places can contribute toward achieving gender equality, Cheung noted.

The Global Gender Gap report released by the World Economic Forum in 2016, projected it would take 107 nations in the world 83 years to close the gender gap. That number, ironically, is the life expectancy of a woman living in Hong Kong. Of the four areas of disparity discussed at the Forum, the economic gap between genders, it was said, could only be closed in 118 years.

Distressingly enough, while regular employees in Hong Kong ought to be covered by the provisions in the government’s “family-friendly” policies, such as marriage leave, compassionate leave, work on flexi-time when required — and even a three-day partially-paid paternity leave for working fathers to care fornew-born children, introduced in February 2015 – a survey by the Institute of Education in January 2015 shows 54 percent of the about 500 married interviewees were not permitted to take any family-friendly leave. Only 6 percent said employers provided childcare support.

The task of achieving gender equality does not rest solely with women, says professor Cheung. If the 20th century was about emancipation of women, it’s men who should be ready to change in the 21st to take women’s causes forward. “The roles played by women as well as society itself have changed in the last century. So men too will have to make some changes to fit in,” says Cheung. 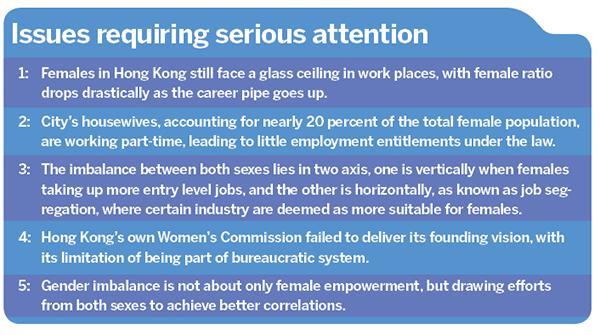