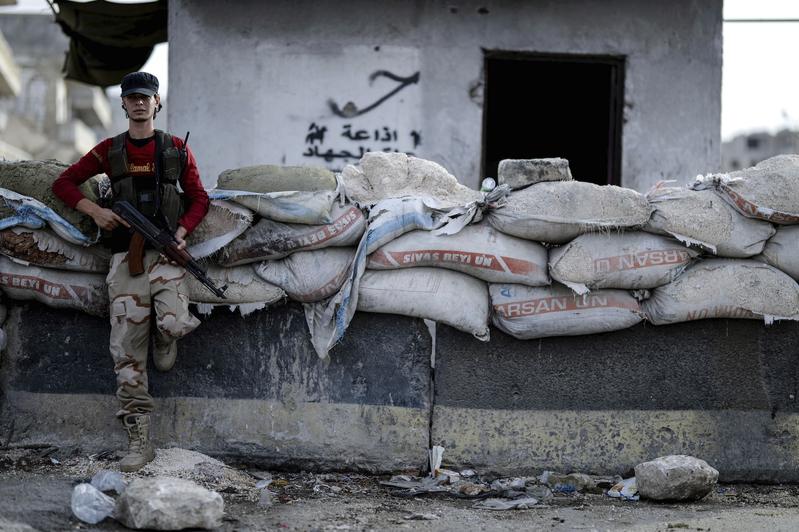 In this Oct 13, 2018, photo, a fighter of Syrian opposition stands at a checkpoint in northwestern city of Idlib, Syria. (UGUR CAN / DHA / AP)

UNITED NATIONS — The members of the Security Council all agree that there should be a political settlement of the Syria crisis, but they are divided over a key issue - the convening of a constitutional committee tasked to draft a new constitution for the war-torn country.

The cease-fire in Syria's Idlib has so far been maintained, providing a window of opportunity for diplomacy over the political process in Syria

Briefing the council on Friday after a meeting with Syrian Foreign Minister Walid Muallem, UN Special Envoy for Syria Staffan de Mistura said Damascus does not think the United Nations has a role to play in the formation of the constitutional committee despite the previous agreement in intra-Syrian talks in Sochi in January.

"Basically, Minister Muallem did not accept a role for the UN in general in identifying or selecting the Middle Third list," said the UN envoy, referring to the list of civil society representatives to the committee.

Under the Sochi agreement, the constitutional committee is to be composed of representatives of the Syrian government, the opposition and civil society representatives - each with 50 members.

In face of the deadlock, the United States and several other countries in the Security Council demanded a swift convening of the constitutional committee. But Russia said there should be no hurry.

"The United States, along with all other members of the Small Group - Egypt, France, Germany, Jordan, Saudi Arabia, and the United Kingdom - and other like-minded UN Security Council partners are united in our position that the UN should move swiftly to convene the constitutional committee," said Jonathan Cohen, the US deputy permanent representative to the United Nations.

"Further obstruction on the committee's formation is unacceptable. Further delay risks squandering the window of opportunity provided by the Turkish and Russian demilitarized zone that has succeeded in preventing further bloodshed in Idlib and beyond," he told the Security Council.

Russian Ambassador Vassily Nebenzia, however, said: "There are no grounds for establishing artificial deadlines for the establishment of the constitutional committee."

"Conditions cannot be imposed that contradict the will of the Syrian parties themselves," he told the council.

Nebenzia questioned the intention of Britain, France and the United States - the countries that requested Friday's Security Council meeting.

Russia is not convinced that the countries which insisted on the convening of Friday's meeting are working for a peaceful settlement of the Syria crisis, said Nebenzia.

He accused them of Russia-bashing.

British Ambassador to the United Nations Karen Pierce was outraged by Damascus' rejection of the UN list of civil society representatives to the constitutional committee.

"I find it incredible that we should have to rehearse for the benefit of the Syrian authorities why the UN needs to be involved in Syria ... This is a threat to the international peace and security. It is right that the UN is involved." 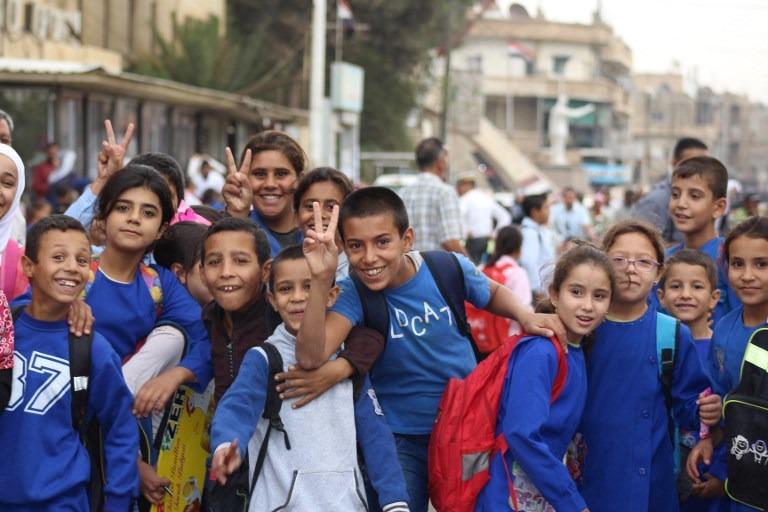 Syrian students pose for a picture near a Syrian government-controlled security zone that includes regime-run schools in the centre of the northeastern multi-ethnic city of Hassakeh on Oct 10, 2018. (AYHAM AL-MOHAMMAD / AFP)

There is now also enormous doubt over what Sochi was and what it now represents, she said. "Either Russia has given the UN and this council assurances it has proved too weak to deliver on, or it was all a cynical smokescreen designed to divert attention and energy while Russia, Syria and Iran prosecuted the military campaign."

De Mistura, who briefed the Security Council via a video link from Beirut, said the Sochi final statement did put the UN in charge of the composition of the constitutional committee.

"Final agreement is to be reached in the UN-led Geneva process on the mandate and terms of reference, powers, rules of procedure, and selection criteria for the composition of the constitutional committee," he quoted the Russian-circulated version of the outcome as reading.

Cohen, the US representative, said no one should doubt that the UN special envoy has the mandate to move forward to establish the constitutional committee. Any list proposed by anyone must have the approval of the special envoy, he said.

Despite what the special envoy heard in Damascus, the United Nations has exclusive control over the committee's membership, schedule, and scope of work - as affirmed by Russia in its January 2018 Sochi declaration, said Cohen.

Jaafari told the Security Council at Friday's meeting that the Syrian government will retake Idlib province, the last major rebel stronghold and home to a demilitarized buffer zone agreed on by Russia and Turkey.

"Idlib is a dearly held part of my country. We are determined to recover Idlib," said Jaafari. "We allow for diplomatic and political work. But our right under the UN Charter and the international law allows us to fully recover Idlib when we deem necessary."

The cease-fire in Idlib has so far been maintained, providing a window of opportunity for diplomacy over the political process in Syria. Attempts by the Syrian government to retake Idlib would represent a major change of situation on the ground and would compromise the UN's efforts to break the deadlock.

Jaafari's statement prompted Pierce, the British ambassador, to request clarification of the Syrian government's stance. She also asked whether retaking Idlib would mean the end of the Russian-Turkish agreement on the buffer zone. 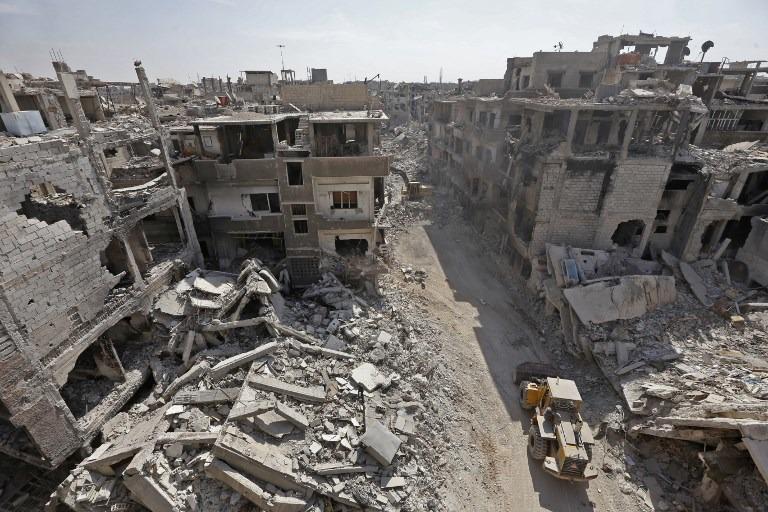 A Syrian regime tractor cleans the wreckage at the Yarmouk Palestinian refugee camp in the Syrian capital Damascus on Oct 09, 2018. (LOUAI BESHARA / AFP)

Jaafari replied: "It's not surprising to say on behalf of my government that we will restore sovereignty over Idlib because it's part of our territory -- in a time we deem it appropriate."

Russian Ambassador Nebenzia said the retaking of Idlib does not contradict with the Russian-Turkish agreement on Idlib.

"It goes without saying that we believe that ultimately the legitimate Syrian authorities will require control over all of their territory ... There is no contradiction with the Russian-Turkish agreement," said Nebenzia.

De Mistura, who will step down by the end of November, vowed to continue to push for the convening of the constitutional committee.

"I will spare no effort in the time that remains of my mandate to verify whether it is indeed possible to convene a UN-facilitated, Syrian-owned, Syrian-led constitutional committee that is credible, balanced and inclusive," he told the Security Council.