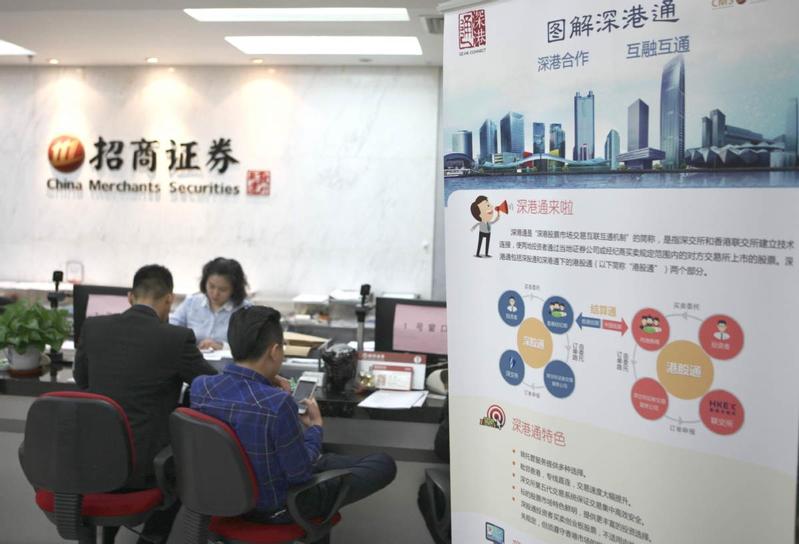 In this undated photo, a promotion board for the stock connect program between Shenzhen and Hong Kong bourses is seen at a securities brokerage in Shenzhen, Guangdong province. (PHOTO / XINHUA)

The stock connect program between the Shenzhen and Hong Kong bourses, which was launched in 2016, has seen its trading volume expand over time to become an important conduit for the Chinese capital market's opening-up, experts said.

The total trading value of the stock connect so far this year has reached 5.11 trillion yuan, outnumbering the sum of the previous two years

By Wednesday, the accumulated trading value of the Shenzhen-Hong Kong stock connect during the past three years was 9.42 trillion yuan (US$1.34 trillion), according to Shanghai-based market tracker Wind Info. The total trading value so far this year has reached 5.11 trillion yuan, outnumbering the sum of the previous two years.

Li Daxiao, chief economist of Yingda Securities, said that the bonding between the capital markets in Shenzhen and Hong Kong has been further strengthened with the stock connect program. Based on its success, more attempts to connect the capital markets in different regions using different currencies will be made possible in the near future, he said.

Over the past three years, the A-share markethas attracted total cross-border capital inflows of more than 136.4 billion yuan via the Shenzhen-Hong Kong stock connect program. According to Yang Delong, chief economist of Shenzhen-based First Seafront Fund, the ongoing changes in investment style among the A-share market investors are more noticeable and important than capital inflows.

According to Yang, overseas investors have always focused on the primary operations of companies and stuck to long-term investment and value investment. The top 20 A-share listed companies that they have invested in the most heavily over the past three years have reported compound returns of 350 percent, which is way ahead of the average performance of most public companies and even the benchmark indexes.

As of Aug 31, 989 out of the 2,179 companies listed on the Shenzhen bourse were from the strategically emerging industries, according to public information.

"Overseas investors have shown preferences for A-share market listed technology, consumption and finance companies, which abound in the Shenzhen stock exchange. The higher-than-average return over the past three years shows that overseas investors are still more mature in choosing the right targets, experiences that domestic investor can learn from," said Yang.