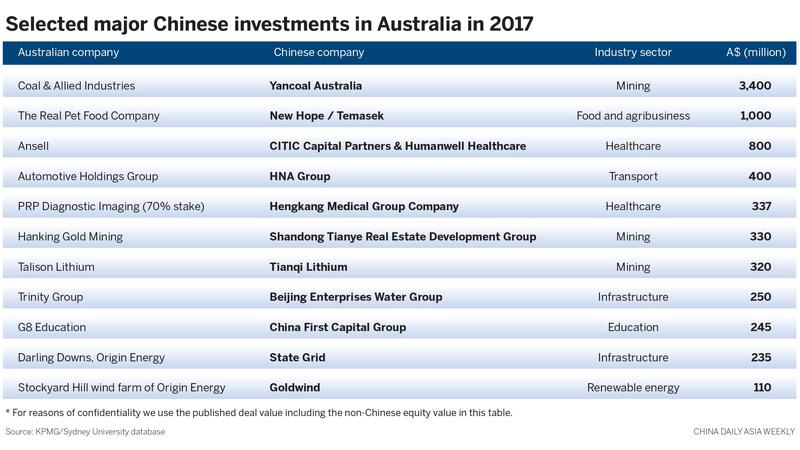 The figures appeared in the report, Demystifying Chinese Investment in Australia: June 2018, by global professional services company KPMG and the University of Sydney Business School, released on June 12.

The report comes at a time when diplomatic relations between Australia and its biggest trading partner, China, are at a low point amid unfounded allegations that China is buying influence in Australia.

The chill in relations has rattled Australia’s business community, especially in the agricultural sector.

The annual report also included the twice-yearly Chinese Investors in Australia Survey, which provides insights into perceptions of the Australian investment climate among Chinese investors.

The survey showed that Chinese executives still find Australia a relatively safe and more attractive country to invest in, but only 35 percent of respondents felt welcome to invest in Australia, down from 52 percent in 2014.

The survey involved interviews with senior executives from 45 Chinese-invested companies located in Australia on their perceptions of the investment climate Down Under and key challenges they face there.

Seventy percent of respondents said the political debate had made Chinese companies more cautious about investing in Australia, and 67 percent see the Australian government as less supportive than previously.

“The survey shows there is a clear perception (among) Chinese businesspeople in Australia that they are unwelcome, and that the federal government is hostile,” said co-author of the report, Hans Hendrischke, professor of Chinese business and management at the University of Sydney Business School.

“Having said that, we should make the point that China has imposed regulatory changes and currency restrictions,” he told China Daily Asia Weekly.

“Investment in areas such as agriculture and infrastructure, sectors in which China is encouraging investment, have gone down quite a lot,” he said.

Hendrischke said he did not want to “overstate” the trend, but admitted “it is worrying”.

“At a time when business relations should be growing between the two countries, Australia is falling back, and competition from Europe and the United States increases.

“What’s interesting is that New Zealand does not have the same problems as Australia when it comes to doing business with China,” he said.

The report said the survey respondents cited the Australian media as the group least supportive of Chinese investment, and Australian business leaders the most supportive.

“While most Chinese investors retained a level of optimism about their Australian investments, some investors, especially SOEs (State-owned enterprises), are apprehensive due to diplomatic tensions and the sense of feeling unwelcome,” Hendrischke said.

“Last year was an important and testing year in many ways for Chinese direct investment in Australia,” said Doug Ferguson, head of Asia and international markets at KPMG Australia and co-author of the report.

Australia still retains its position as the second largest recipient of accumulated Chinese investment — only behind the United States — with just under US$100 billion since 2008.

“But the gap is growing,” Ferguson said.

He said the fall from 2016 levels in Australia has not been as severe as in the US (where the rate of growth of new Chinese ODI is down 35 percent) and the EU (down 17 percent).

Ferguson admitted, however, that there is likely to be a continuation of the current downward trend in 2018.

The report said Chinese investors continue to be drawn to projects in Australia that relate to growing Chinese consumer demand and Chinese government priority initiatives — health and well-being, tourism and lifestyle, real estate, technology, services, and a continuing demand for mining commodity resources, “all areas where Australia is internationally competitive and has potential to grow”.

“The macroeconomic framework is supportive, while the market is attractive from a global perspective — economic fundamentals are robust, population growth is solid, market transparency is high, and returns are broadly higher relative to comparable markets globally,” he said.

Zhang pointed to a notable shift in the scale and type of investment related to Australian real estate.

“There has also been a partial shift away from trophy assets and large-scale acquisitions, with investment activity concentrated in the A$5 million (US$3.8 million) to A$49 million price bracket.

“Around 63 percent of the total number of transactions occurred in this lower price bracket.

“This is somewhat attributable to the restrictions placed on capital outflow from China.”

Zhang said that while investors are not necessarily impeded in acquiring Australian real estate, “restrictions have altered investment outcomes and changed the relative attractiveness of different property types”.

“The more robust asset selection criteria and the shift toward quality product and sites at the smaller end of the market is a reflection of these capital control measures,” he said.

The report concluded by saying that Australia’s relationship with China, while experiencing a period of heightened tension, is “mature and deeply established in trade and investment and increasingly in society and culture through education, tourism and migration”.

This was reflected on May 28 when a delegation of 100 business leaders from East China’s Zhejiang province gathered in Sydney for a trade and investment forum sponsored by the Australia China Business Council.

Sydney University’s Hendrischke said he talked to several people at the forum. “The feeling I got was the Chinese are still positive about doing business in Australia. They have not, at this stage, said they are turning away from Australia,” he said.

In July, David Thomas, president of the Australia China SME Association, representing small and medium-sized enterprises, will head a delegation of Australian entrepreneurs to China seeking seed funding and support for new ideas, products and services.

Thomas said a lot of Chinese outbound investment is being redirected to onshore domestic projects and the Belt and Road Initiative.

“Having said that, there is still an appetite to invest in Australia in non-residential real estate projects, and especially aged care, child care, agriculture and tourism infrastructure,” he told China Daily Asia Weekly.

“Building residential apartments is not of interest anymore. Individuals are becoming more concerned about playing by the rules for outbound investment, which will naturally slow things down,” Thomas said.

“I can’t say that there is any evidence of investment in Australia being discouraged for political reasons. But everyone is aware of the current tensions.”

“When I was involved with the citrus industry, we benefited from the closing down of the trade in Sunkist oranges due to tensions in the US-China relationship. It would be a shame if the same happened to us after all the good work we did.”