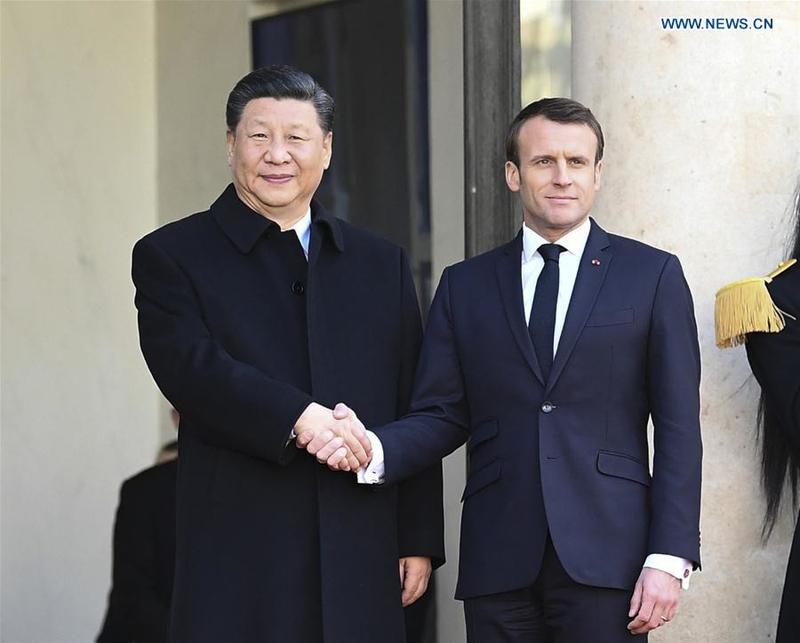 PARIS — Chinese President Xi Jinping and his French counterpart, Emmanuel Macron, on Monday agreed to carry forward the high-level ties between the two countries and forge a more solid, stable and vibrant China-France comprehensive strategic partnership on a new starting point in history.

China is willing to work with France to inherit the past and create the future ... and make more historic contributions to building an open, inclusive, clean and beautiful world that enjoys lasting peace, universal security and common prosperity.

The consensus was reached during talks held between Xi and Macron at the Elysee Palace in Paris.

Xi said that great changes have taken place in the international situation, but the China-France relations have always kept developing on a high level and in a sound and stable way.

He said that since President Macron took office, the bilateral ties have reached a new high in just less than two years, with many new outcomes achieved.

"Knowing the past can help people judge today and move on better," he said.

The world is undergoing major changes rarely seen in a century, and humanity stands at a crossroads, and for China, France and Europe, they also come to a critical stage of development, the Chinese president said.

"China is willing to work with France to inherit the past and create the future, enable our close and enduring comprehensive strategic partnership to continue leading the way, and make more historic contributions to building an open, inclusive, clean and beautiful world that enjoys lasting peace, universal security and common prosperity," Xi said. 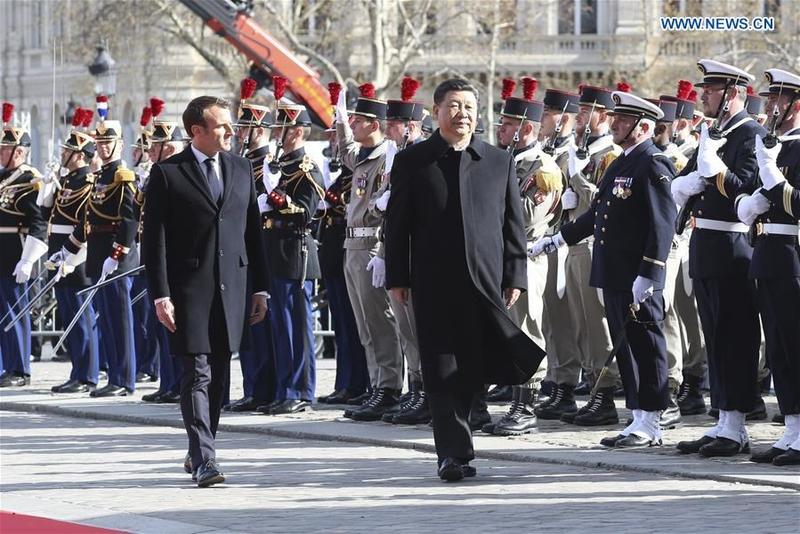 The Chinese president proposed that in order to develop the relations between China and France in a sound way, the two countries should have political mutual trust, practical cooperation and friendly sentiments between the two peoples.

"Under the new situation, the two sides should do much better in those three aspects, and continue to explore the way for major countries to get along with each other, which should feature independence, mutual understanding, foresight, mutual benefit and win-win outcomes," Xi said.

"In politics, we should not only build a strong 'dam' of mutual trust, but also a 'lighthouse' of ideal," he said.

Xi said both countries should have political mutual trust, practical cooperation and friendly sentiments between the two peoples in order to develop China-France relations in a sound way

He suggested that the two countries deepen communication and exchanges in an all-round way and on various levels, fully leverage the roles of all institutional dialogues, and increase the exchanges between governments, legislative bodies, political parties and armed forces.

The two sides should insist on respecting and accommodating each other's core interests and major concerns, pursue harmony in diversity, and seek common ground while reserving differences, Xi said.

He urged the two countries to strengthen cooperation under the United Nations (UN), the Group of 20 and other multilateral frameworks, push for the implementation of the Paris agreement on climate change and the 2030 Agenda for Sustainable Development, take practical action to safeguard multilateral trading regime, and uphold the basic norms governing international relations as underpinned by the purposes and principles of the UN Charter.

On practical cooperation between China and France, Xi said the two countries should not only explore the "source of flowing water" in market, but also facilitate the "river channels" in policies.

The two sides should deepen cooperation in nuclear energy, aviation, aerospace and other traditional sectors, and expedite cooperation in emerging areas including scientific and technological innovation, agriculture, finance and elderly care, Xi said.

President Macron has on many occasions expressed the willingness of carrying out practical cooperation with China on the Belt and Road Initiative (BRI), which China appreciates, Xi said, adding that the two sides need to earnestly implement the BRI-related demonstration projects in third-party markets.

He asked the two countries to provide more support and convenience for bilateral trade and investment. 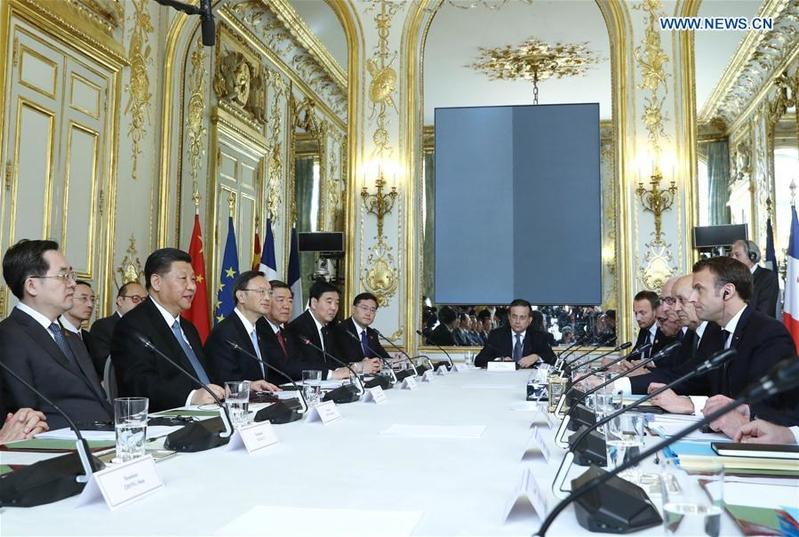 On people-to-people and cultural exchanges, Xi called for enhancing both intergovernmental cooperation and non-governmental contacts.

The two countries should fully use the China-France high-level people-to-people and cultural exchange mechanism and promote cooperation in culture, tourism, language, youths and at local level, Xi said

The two countries should fully use the China-France high-level people-to-people and cultural exchange mechanism and promote cooperation in culture, tourism, language, youths and at local level, he said.

Xi also asked the two countries to well organize the commemorative activities on the 55th anniversary of China-France diplomatic ties and the 100th anniversary of the Chinese Work-Study Movement in France, and to host a culture and tourism year in each other's country in 2021.

China supports France in continuing to play a leading role in the process of Europe's uniting for self-improvement, and hopes France exerts a more positive influence in pushing forward China-EU ties, Xi said.

The Chinese president also urged both sides to accelerate the negotiations on a China-EU investment treaty, and initiate a joint feasibility study on the China-EU free trade agreement at an early date.

Meanwhile, Macron said since France and China forged diplomatic relations 55 years ago, the two sides have always respected each other, which allowed them to conduct extensive and productive cooperation.

Noting that the keynote of France-China comprehensive strategic partnership is cooperation, the French president extended his country's congratulations to the People's Republic of China for its huge achievements since its founding 70 years ago, and said that France is committed to being China's reliable and assured strategic partner, and is willing to join efforts with China to build a balanced, stable, safe and prosperous world. 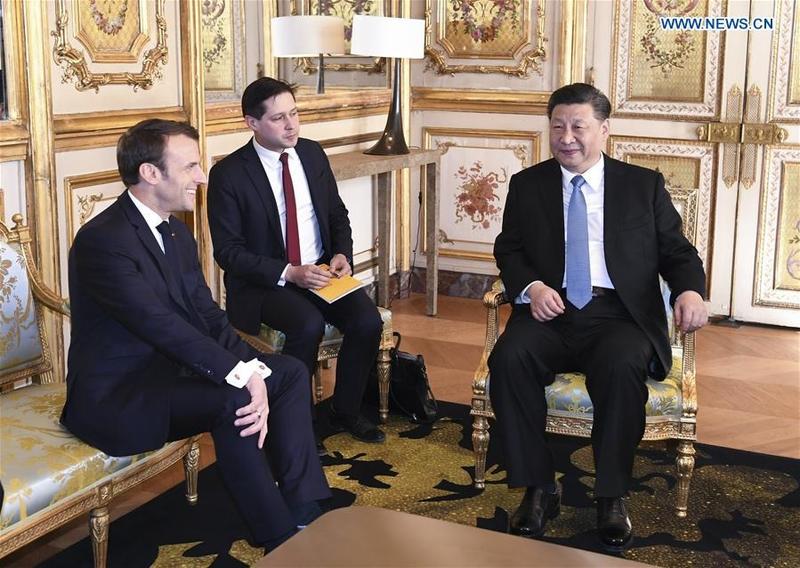 France has full confidence in the future of France-China relations, Macron said, pledging to boost cooperation with China in such fields as aviation, aerospace, nuclear energy, agriculture, finance, scientific research, automobile manufacturing and elderly care, and to align France's Industry of the Future initiative with Made in China 2025.

France has full confidence in the future of France-China relations, Macron said

France and China have a lot of common ground in international affairs and have maintained close communication and coordination, he said.

France and China, as well as the EU and China, can work together in advancing more global agenda, improving global governance system, and protecting multilateralism and free trade, he added.

The French president also pledged to actively push forward the EU-China cooperative relations, saying his country holds that the EU's connectivity strategy and the BRI should be docked with each other.

After their talks, the two leaders witnessed the exchange of bilateral cooperation documents, including third-party markets cooperation, and met the press together.

Macron held a grand welcome ceremony for Xi at the Arc de Triomphe before the talks.

Xi arrived in Paris from the southern French city of Nice on Monday to continue his trip to the country. Two French fighter jets escorted Xi's plane as it flew from Nice to Paris.

It is the second state visit by Xi to the European country in five years.

France is the final stop of Xi's three-nation Europe tour, which has already taken him to Italy and Monaco.